My luck ran out today. Although it was dry when I set off this morning, within a very short time it was steadily drizzling and continued to drizzle for pretty much the whole walk. I had been encouraged by my guide and by readers of the blog to walk the coastal option today, and I duly did, but unfortunately the grey sky and the grey sea and the misty drizzle all added up to a very uninspiring view. I walked with Luc again and we followed the GR E-9 route over farm tracks close-ish to the coast.

When we reached Tapia we decided that due to the weather conditions we would rejoin the ‘official’ route and save ourselves some kilometres But many things must have changed since my guide was written (as has been obvious on many occasions). We unintentionally stayed on the GR route and it was very well marked with red/white stripes but also with camino shells and arrows and we soon found ourselves approaching the very impressive bridge crossing the wide Rio de Ribadeo and although the rain had now stopped, it was still very misty and what would have been spectacular views from the bridge were the same as the views we had seen all day – grey.

The Ribadeo albergue is in an odd position very close to being under the bridge, although it isn’t too far to walk into the town. Crossing the bridge we had entered Galicia and as is typical in this province, the albergues supply paper sheets and pillow cases and the cost is always 6 euros. The Ribadeo albergue has 12 beds, kitchen facilities and two bathrooms. It is rather spartan and could do with an interior paint job. Lots of mildew on the walls, but being alongside the river, that is not really surprising. The water was piping hot, but I am glad I didn’t need to do any washing, as my clothes wouldn’t stand a chance of drying in these conditions.

I wandered into the town looking for a phone shop to top up my iPad sim, and eventually found myself in the Plaza de España with many impressive buildings. But I couldn’t belive my eyes when the saw this tangerine monstrosity next to the beautiful Torre de Los Moreno, how could the town hall allow such an indiscreet colour scheme, so out of place with its surroundings. 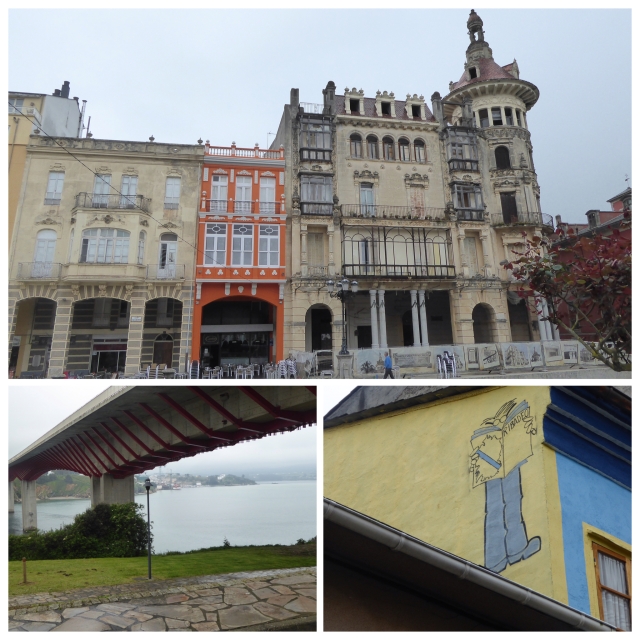 It being Sunday tomorrow I have topped up with food supplies so that I won’t go hungry if all shops are closed. That of course means I will have a heavy pack in the morning, until I slowly eat my way through the weight. I have also been carrying way too much water in these cool conditions. I barely even finish one of my 750 ml bottles during the day and I am carrying 750 ml more in my top-up bottle. And there have been plenty of opportunities to refill on this route by way of fountains and cafes, so if it remains cool, I should carry just one bottle.

Beyond the albergue is some parkland and a lovely walk that leads to the lighthouse.  I took a stroll whilst waiting for the hospitalera to arrive at 19:15 and soon after Luc and I went out for a farewell supper.  Another very nice man who is about to celebrate his 50 th wedding anniversary, as is Gunter.

Thanks for all your concern about my tale of woe yesterday. I appreciate your thoughts. I did not really want to to sensationalise events, but wanted to ‘tell it like it is’. I am not easily intimidated and this type of event is relatively rare on camino. But there are always chancers and perverts in all societies, so we must expect a share of this behaviour. I did take a photo of the guy that I thought was following me, but from behind, which wouldn’t have been very useful to anyone. I don’t know what I would have done in the case of some pervert masturbating in front of me. A photo would be very good evidence for the police, but it might provoke an act of retaliation where it might not otherwise have taken place. I would definitely make sure that the rubber tips were removed from my walking poles so that I could at least have some sort of weapon, but even that could easily be taken and used against me. It has been said that a squeezy bottle of lemon juice is a legal and effective weapon if used close up and squirted in the eyes of an attacker. There is a fine balance between protecting yourself and aggravating what might have been a passive (albeit abusive and intimidating) display. I had no evidence that the guy I thought was following me had any ill-intent, but I believe all obvious abuses of women should be reported, perhaps in the first instance at the next albergue, or to the police if there are any in evidence. I am confident that any such reports will be taken seriously by the Spanish authorities and treated with respect and dignity.

Sorry for the lateness of this post, there was a total lack of wifi in the places I visited.