A week of variety

Last week was the start of my new eating regime (not vegan after all, as I am reliable informed that one cannot be a part-time vegan). I had great fun researching interesting recipes for my plant-based diet and have enjoyed eating bean burgers, barley bake, falafels, rice & lentil loaf, and red lentil chilli (although not all at the same time). I have to say that I am finding it much easier and more pleasurable than I expected, but I promise not to bore you every post!

Last weekend saw David and me taking a trip to Málaga for our first visit to the Teatro Cervantes – a beautiful old theatre dating from 1870. I had seen an item in a Málaga newsletter that John Mayall was playing there to kick off his European tour. Now I didn’t know a great deal about Mayall, except that he played at one time with Eric Clapton, and if he was good enough for Clapton he would certainly be good enough for me. I booked tickets online and was amazed to see the cheapest tickets available at just 14 euros each. The next price bracket was 30+ euros and there were several other tiers at higher prices. I looked at the theatre layout and decided that I would go for the cheap seats (yes, I am that much of a skinflint!) After completing the transaction I realised that I had not been allocated any seat numbers and was rather anxious that we might be standing up for the duration.

As it happened, we were seated, but in the ‘first come, first served’ wooden benches of the gods (in Spanish – paraiso, translated as paradise) situated at the slightly vertigo-inducing heights at the back of the third circle. We found that the back row was favourable as we could lean back against the wall and as we were both wearing warm coats we could use them as cushions. It was actually comfortable enough, but a proper cushion would have made it a bit less of a pain in the arse (since dropping a few kilos I have lost my natural padding).

Now, John Mayall was born in 1933, making him an impressive 83 years old. This is the age that my poor old Dad died, and for the last year of his life he suffered with vascular dementia and was only able to shuffle around and not really capable of looking after himself.

I was so impressed with Mayall, he performed for the best part of two hours, playing keyboard and harmonica and occasionally lead guitar and singing every number. He was accompanied by a bass guitarist and a drummer and was very generous in letting them shine with several solo spots. What energy this guy has, he was standing almost the whole show and seemed as lively at the end as he had been at the beginning. It was a fabulous performance in a beautiful theatre – a real joy.

On Sunday we went to the ‘pre-opening lunch’ at a new venue in Cómpeta – Finca Las Sierras. We definitely wanted to support this venture as it was hosted by the couple that are renting David’s property (you may remember that I asked help with marketing it last year). It was never our home, we continue to live in a tiny house overlooking the tiny neighbouring village of Canillas de Albaida. In the event, the property was rented to a charming Belgian couple, experienced hoteliers and restaurateurs, who are soon to welcome their first B&B guests, and they are planning to serve lunches to the public several times a week.

Wilco and Manon have made the place feel really cosy (which is not an easy task in a huge room of 150m2) and have furnished the place with style and good taste. On this occasion the weather was a little chilly for eating al fresco (well, what do you expect in February), but we spent a very pleasant time on the terrace looking out over the green valley towards the sparkling Mediterranean (yes, I used to write descriptions for a property agent) whilst chatting to the other guests and being served cocktails, and four irresistibly presented hors d’oeuvres, including prawn and avocado, strawberry soup with razor clams, mussels, and chilli. 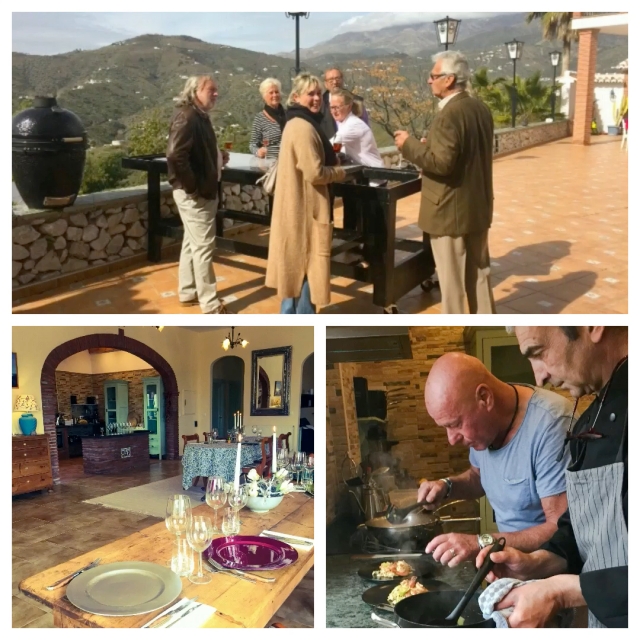 When it was time to take our table, we were served four courses of the most excellent and beautifully presented food, including pear and gorgonzola salad, prawns in spicy coconut sauce on homemade tagliatelle, fillet steak in porcini-pepper sauce with fresh veg, and fruit marinated sabayon. Every morsel was delicious and every plate was left clean. I am not in the habit of photographing my food, but on this occasion I made an exception – unfortunately I was several spoons-full into my dessert before I remembered. The service was attentive without being intrusive.

So I obviously took the day off from my plant based, alcohol-free diet – and it was worth every taste-bud popping second.

I hope anyone local to the Cómpeta area will look out for the forthcoming schedule of lunches. If the food is anywhere near the quality we experienced on Sunday, I can guarantee you won’t be disappointed. It seems Cómpeta has a new jewell to top its already sparkling culinary crown.

I’ve also put in a couple of longer walks this week in lovely warm sunshine. I shall be upping my distances over the next couple of weeks in order to build up my camino fitness, and to wear-in my new boots once I have finally purchased them. As I was walking back through the village yesterday I came across my old riding pal Pepe, who invited me to ride out with him some time soon, which was lovely as I haven’t ridden for a couple of years and I miss my horse terribly.

Trepidatious Traveller - camino blog is about preparing for and walking the Camino de Santiago. Many future pilgrims have found the blog useful and inspiring, and many who have no plans to walk the camino have simply enjoyed the dialogue http://www.magwood.me
View all posts by magwood →
This entry was posted in A view of life, Expats in andalucia and tagged Canillas de Albaida, Cómpeta, Expats in Andalucia, Finca Las Sierras, John Mayall, long distance hiking, Málaga, Teatro Cervantes. Bookmark the permalink.

12 Responses to A week of variety