My mojo was still in evidence this morning as I set off from Finisterre at just after 07:00. I hadn’t remembered the walk as being that great – it was the finale of my first camino (Frances) in 2013 when I walked with my daughter Ella, but we had walked to Muxía first and the final stage was to Finisterre. So this morning I was walking in the opposite direction.

My original plan for this year had been to walk along the coast from Finisterre to Muxía over two days. There is a route called the Csmiño dos Faros, and stretches from Malpica to Finisterre. But recently I had heard that the stages between Muxía and Finisterre were really quite difficult and there had been several instances where people had to be air-lifted to safety. So common sense kicked in and I decided to take the inland route instead.

It was beautiful and I enjoyed every step to the half-way point at Lires. There had been a little rain early on, but nothing significant and I was soon enough stripping off the rain gear. The route was mainly through woodland with enough elevation to remind me that I wasn’t super-human. I came across a good selection of animals, very large (and very up-close) and small.

I met friendly cats, indifferent sleepy cats, a greedy donkey, a grumpy dog, a herd of cows on their way to/from milking that almost ran me off the road, a pony who just wanted to stand in the shade and smell the flowers, and a pretty blue butterfly that stayed put long enough for me to capture an image.

There is a lot of two way traffic on this stage of the camino and many ‘buen caminos’ were wished back and forth. I saw two extremes of unusual camino clothing today, that might be termed ‘the sublime and the ridiculous’ – I shall leave it up to you to decide which style deserves which accolade. My first thought was that the hareem pants would be extremely uncomfortable if one received a thorough soaking (and might feel like walking in a heavily soiled nappy), whereas the very short shorts might cause significant other discomforts. Both were worn by young women, most likely on their first camino.

There were a couple of pilgrim watering holes along the way, where refreshments were available either for a donation or from a vending machine.

I stopped in the small village of Lires at 13.7 km and enjoyed an orange juice and a bacon sandwich. Up to this point I had absolutely enjoyed every step of the way. The paths were good, there was not much road walking, there were pretty (and some very colourful) villages to pass through, wild honeysuckle and roses to enjoy and generally observe small village life. 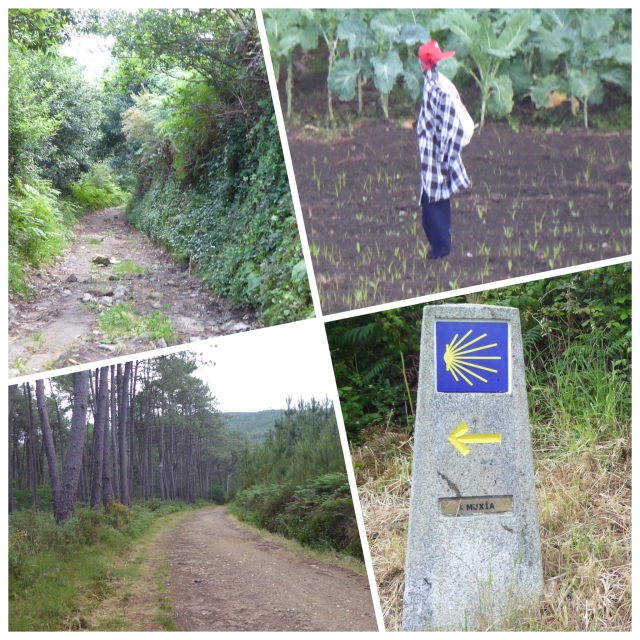 After Lires there was more road walking and more elevation, and I grew a little tired, but it remained a very enjoyable walk.

The cloud cleared in the late morning and the sun emerged into a blue sky and all was well with the world. There were a couple of water sources where I could wet my buff to cool my neck, but although it was lovely and warm, the temperature didn’t rise too much.

There was a brief glimpse of the coast at Lires and then nothing until the approach to Muxía where there is a magnificent white beach. The town itself has a variety of restaurants, a pretty marina and port area and a mixture of traditional stone and modern properties. 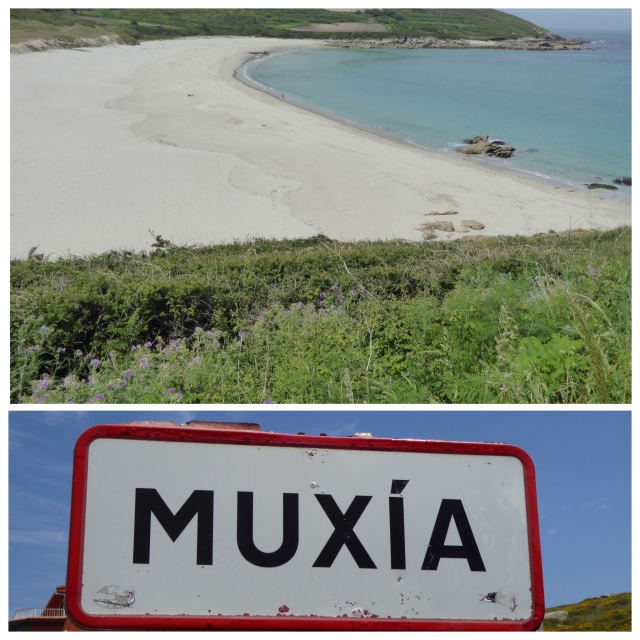 I walked directly to the albergue BelaMuxía where I had stayed on my only other visit four years ago. It is very comfortable with bunks in cubicles with power points, well thought out showers, large laundry and good kitchen/dining area, 12 euros.

My first job on arrival was to take off my boots for the last time (they will not be coming home with me – the soles are paper thin and I already have four worn-out pairs of boots at home). The second job was to go towards the marina and find a restaurant for a celebratory glass or two of wine and something to eat. And then in the evening I met with French Valerie and Dave for one final goodbye supper.