So we jumped on the bus at Villanueva de la Serena bus station shortly after 09:00 (Tuesday 7 May). There were two women in the admin area of the bus station – one who sold tickets when anyone needed to buy them, which wasn’t very often as I think most are sold on the bus. The job of the second woman seemed to be to look out of a window of her first floor domain. When we consulted them to confirm the time of the bus and whether we needed to pre-purchase a ticket, window woman stressed over and over that we would be taking a small red bus…rojo, Rojo, ROJO as she jabbed at Marilyn’s red specs case.

We watched in amusement from above as a large group of school children were awaiting a coach for a super-exciting school trip – some dragging suitcases bigger than themselves. There was much hugging and kissing from devoted parents and much counting of heads by the harassed teachers, and very much excited chattering of said kids.

Once they departed we went down to await the little RED bus whilst the window lady looked out of her window upon her dominion below, and every time a bus of any colour arrived she wagged her finger at us in a negative manner. Eventually a little green bus arrived and she excitedly indicated that this was the one. It seemed she had two jobs to do that morning, but at least she got one of them right

It was indeed a small bus with no luggage compartment and luckily only three passengers for most of the way. We rode 50 km for 7.10 euros which seemed a good enough deal. More people got on as we came nearer to Trujillo and Marilyn and I, and our accompanying backpacks, had obviously taken their normal seats, and there were dirty looks and tuts aplenty.

We are dropped at the very edge of town where green pastures spread into infinite distance on one side and beautiful imposing historic buildings on the other. There seemed to be no industrial or suburb areas – just an immediate introduction to the magnificence of this ancient town. The walk to our accommodation took only about ten minutes and our Hostal (Hostal Hueso) is situated only 50 metres from the impressive plaza mayor. We quickly dump our packs and set off to discover some of the riches that surround us.

We start with the Church of Santiago where we obtain a fine sello for our credenciales, and then continue to the castle where we spend a long time clambering up uneven steps to the top of the castle walls and look down upon the beautiful towers and spires and rooftops of the main square and its surrounding streets. This place is worth a couple of days of anyone’s time, if you like characterful ancient buildings, you won’t be disappointed. There are storks nesting on every available tower and their bill clacking, which is courtship behaviour, is all part of the experience. 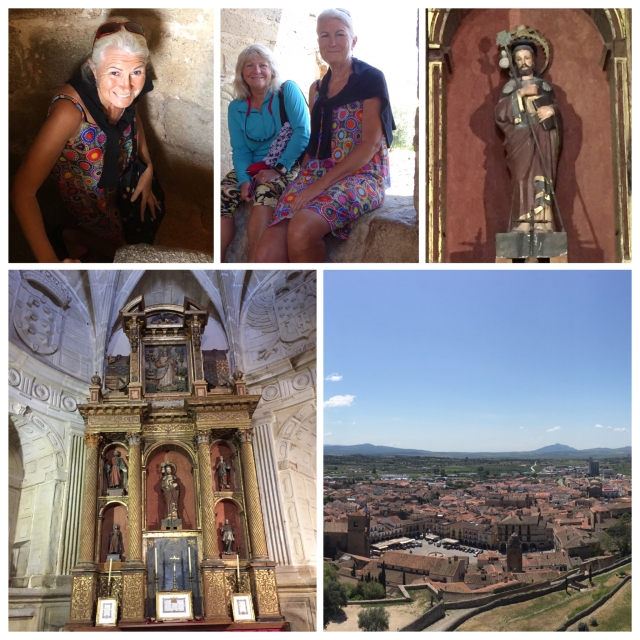 My only disappointment with this city is that cars are allowed to park in the plaza mayor, right in front of the bars and restaurants which gives diners a lovely view of a radiator grill and quite often the fumes of a running engine.

We wander the streets for several hours and buy some food for supper. I make a salad that I eat in our room. And then we take the short stroll to the plaza again. I am disappointed to see more cars arriving and filling the square – all part of the ‘Spain Classic Rally’. I hang around until dark and take a few more photos. 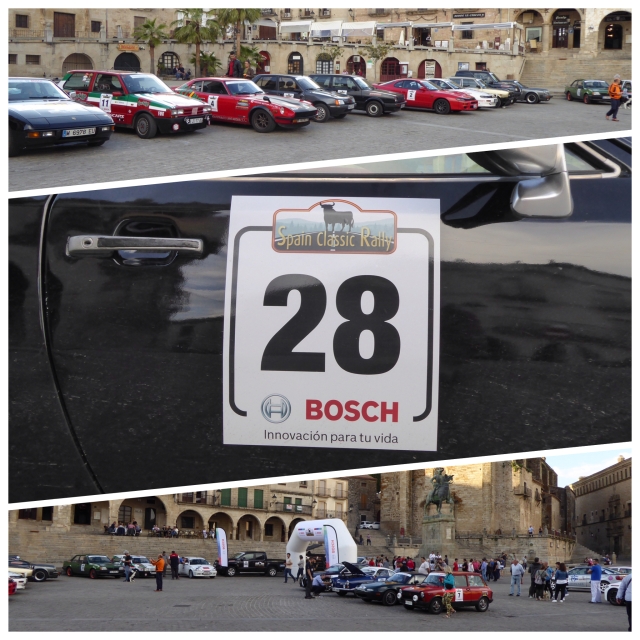 It is strange how doing nothing can be so tiring. I actually had my first siesta of this trip. I am tired in a different way after walking but never need to sleep.

Today (Wednesday 8 May) we are taking another day in Trujillo and by now Marilyn and I are both a bit fidgety. It feels all wrong not to be walking. But we have a date to meet others in Salamanca so there is no point in rushing ahead. There are certainly worse places to be grounded in!

We take another walk around and admire a 15 century convent building. As we are standing there two nuns walk towards us and Marilyn engages them in conversation which results in Sister Margaret opening the door to us and telling us about her life at the convent. There are eighteen nuns at the convent and eight of them are from Kenya. This Dominican order is cloistered and although things have changed a little in recent years, for the most part the nuns do not interact outside their walls, but live a life of quiet contemplation and prayer. But over the years the older nuns have become infirm and need to be transported to doctor and hospital appointments and so several of the younger nuns have learned to drive and they have a car for such purposes. Sister Margaret, from Kenya, tells us that she has been part of the convent community for eighteen years and that there are more Kenyan nuns in the other two convents in the town. They go home for two months every three years. She says that when she left her home there were no opportunities to take vows in Kenya, but that is now changing. It was a most interesting way to spend half an hour or so.

We are both keen to get going again tomorrow.