Camino blogs
Click on  ‘My Caminos’ in the menu bar at the top of the page for a drop down list of all seven camino routes, each with a daily report from along the way.  Or click on the links given below.

My next (8th) route will be along the Camino Olvidado (forgotten route) from Bilbao to Ponferrada and then onto the Camino Invierno (winter route) from Ponferrada to Santiago de Compostela.  I may have time to walk on to Finisterre and Muxia.  It is planned to set off at the end of April 2020 and hopefully we will not encounter any snow at the high altitudes.

Check out previous caminos below…

Camino Frances for daily reports from the Camino de Santiago (Frances route), 500+ miles across northern Spain from the Pyrenees through Santiago de Compostela to Finisterre – which I walked with my daughter in April/May 2013

In 2014 I walked the Camino Portuguese. I set off from Lisbon in May and travelled north through Portugal, across the Spanish border and on to Santiago de Compostela (670 km’s). The daily posts are full of photos and useful information for future pilgrims.

2015 saw me walking the Camino Mozárabe from Málaga. This little-walked camino is very lonely for the first 500 km and I was lucky to find a walking partner for company. We saw only three other pilgrims during eighteen days of walking. At Mérida the Mozárabe meets the Via de la Plata and there are many pilgrims from this point on. I took the Sanabrés variant of the VdlP and after reaching Santiago I walked on to Finisterre. 52 days walking and 1,365 kms. I provide a lot of information in these posts that I hope will be useful to future pilgrims taking this route.

In spring 2016 I set off on the Camino del Norte . I commenced walking from Irun on the  French border, and travelled west along the north coast of Spain as far as Ribadeo, at which point this camino drops down inland towards Santiago and joins with the Camino Frances for the last 40 kms. Instead, I continued to walk along the coast and followed the Ruta do Mar as far as Ferrol. This is a developing route and does not have the signage and accommodation infrastructure of the well known pilgrim ways.  On reaching Ferrol I continued along the Camino Ingles into Santiago de Compostela. Total distance 970 km over 35 days.

And my fifth camino was a combination of four different pilgrim routes – Camino de Madrid,  Camino San Salvador, Camino Primitivo and the Camino Fisterra.  Commencing the last week of April 2017, you can follow my progress here

In 2018 commencing mid April I walked the Camino Mozárabe/Torres .  Starting in Almería in southern Spain I walked the Mozárabe to Salamanca (having taken a detour along the variante Trujillo). Then I hopped onto the Camino Torres which crosses into Portugal to Ponte de Lima, where I jumped on a bus to  Viana de Castelo on the Portuguese coastal route and headed up to Santiago de Compostela via the Variante Espiritual, covering approximately 1,500 km and taking 56 walking days.

My route in 2019 was the Camino de la Lana (the Wool Route) which commences in Alicante and heads north to Burgos. I had planned to continue on the second half of the Camino Olvidado and then the Camino Invierno. Sadly the best laid plans did not come to fruition when I suffered an injury a few stages short of Burgos and had to return home.

Click A view of life to read about the joys and quirks of living in an Andalucian mountain village. I lived in Spain for some years but have now returned to the UK. 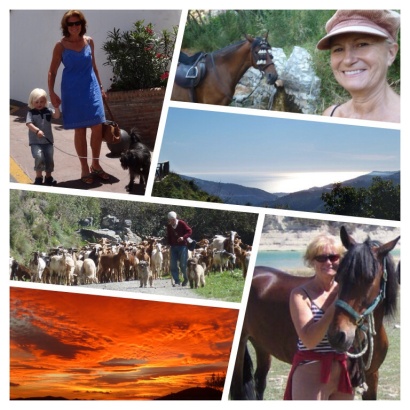 Click on Asia
to read about my adventures with Ella (my eldest daughter) in Bangkok, Sri Lanka and India in July 2012 (a work in progress!)