I set out for Malaga airport at 09:30 on Sunday 8 July and once I landed at Stansted I immediately tuned my iphone to radio5live in order to listen to the commentary on the Murray Wimbledon final. He was one set up when I first tuned in but went on to lose to Federer 3:1

He’s going to have to wait another year!

The queues for passport control were interminable but eventually I was able to take a 45 minute taxi ride into the city. I was glad I had done some research and I knew how much the fare should be because the driver tried to charge me double. I refused to pay more than I was advised and the driver didn’t put up much of a fight.

I was dropped at the end of a road, where the driver said I would have to walk to the hotel at the opposite end of the pedestrian street.
The hotel, is situated on the Khao San Road, a very busy area, full of shops, stalls and bars, very noisy and buzzy. It was quite an effort wheeling my case between the crowds and stalls and tuktuks, but I finally made it to the Rikka Inn. 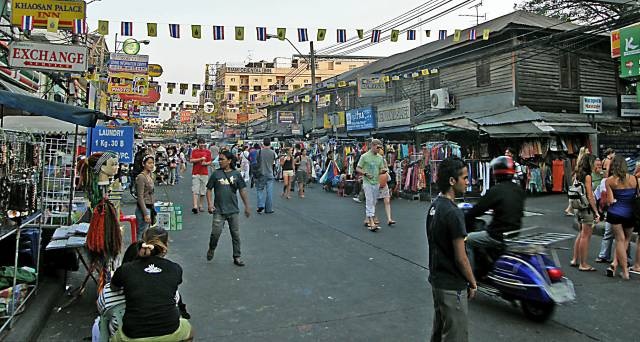 The room leaves a great deal to be desired, just big enough for two single beds, a view to a rusty fence on a neighbouring rooftop, AC which is either icy cold or off, three coat hangers, no drawers, and a small very basic bathroom. I didn’t unpack in case Ella also hated the room and we decided to leave and find somewhere a lot better.

I didn’t really feel comfortable exploring on my own so got a couple of hours’ sleep and then watched a few episodes of a tv series that I had downloaded to my ipad.

Ella isn’t due to arrive until much later – I think she lands at about 23:00 so I won’t expect her until the early hours.

She finally arrived just after 1:00 am and after a short while catching up we went out for a drink. The street outside is full of bars and shops and is still full of life with people everywhere. We wandered up and down for a while and stopped at a bar for a cocktail and some beer.

Khoa San Road, busy during the day, is absolutely buzzing at night

We stayed for a couple of hours, during which time the rain started and it absolutely lashed down, with rain bouncing off the street and lightening flashing above us. We have timed our trip during the rainy season, so we expect this to be a regular occurrence during our stay.

We ended up with some street food at 4:00am, pad thai noodles with chicken, which we took back to the hotel room and really enjoyed – excellent value.

Trepidatious Traveller - camino blog is about preparing for and walking the Camino de Santiago. Many future pilgrims have found the blog useful and inspiring, and many who have no plans to walk the camino have simply enjoyed the dialogue http://www.magwood.me
View all posts by magwood →
This entry was posted in Far Eastern adventures and tagged Bangkok, Khao San road, Pad Thai, rainy season, Rikka hotel, street food, Thailand, travel. Bookmark the permalink.