We are up at 04:30 this morning for a 05:15 departure via an open back jeep to the Yala National Reserve.

We see the sunrise over a lake en-route and as we get closer to the reserve there are more and more jeeps joining the rush to be first in the queue, darting in between each other on the dirt track – all great fun.

We arrive at the park by 06:00 although it takes another half hour for everyone to be issued with tickets. As I look around at all the other vehicles it occurs to me that we are somewhat lacking in the glamour stakes, we have side benches in our open jeep, at the same level as the driver’s seat, so we either have to swivel our bodies or our necks, or both, to see very much. 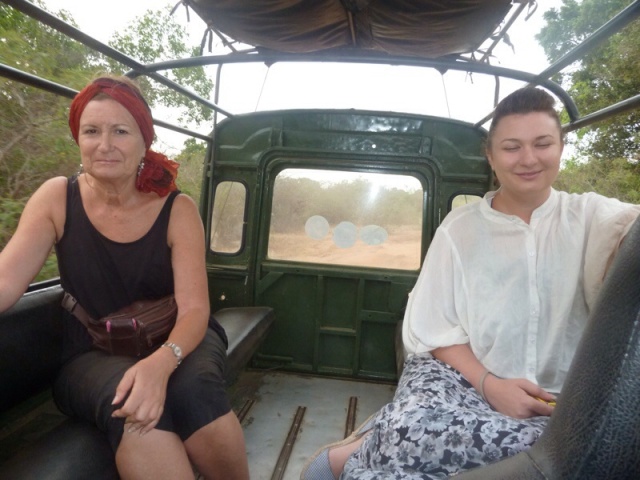 Other jeeps have luxury raised seats facing forward with a view over the driver’s roof. Never mind, our driver is a lovely chap, very observant, pointing out creatures that we would never have seen without him. The tracks are very bumpy but he doesn’t bounce us around too much. We see the following creatures:

Crocodiles (loads of them) 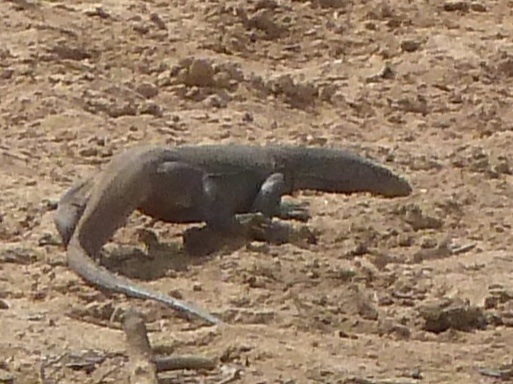 What we might have seen, but didn’t, were leopards, otherwise we really did rather well.

One corner of the park borders the ocean and there is a memorial to the victims of the tsunami when 58 Chinese tourists died on this spot. Apparently no animals died, as they had all sensed something was wrong and made their way to higher ground. The sculpture indicates the height of the waves that killed so many people. 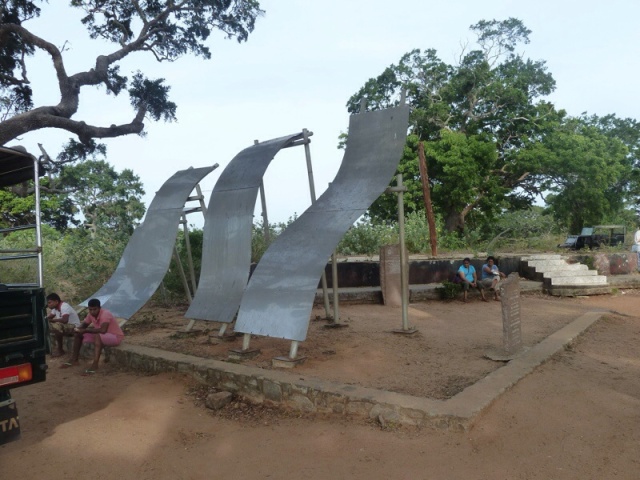 We leave the reserve at 10:00 and return to the hotel to shower off the dust and then set off on the next leg of our journey which takes us past an amazing waterfall at a town called Ella.

After some lunch we walk up “Small Adam’s Peak” which involves a steady climb along a path through a tea plantation and up some 320 steps to the top of a mountain where the 360 degree views were fabulous even though it was quite hazy due to the humidity. 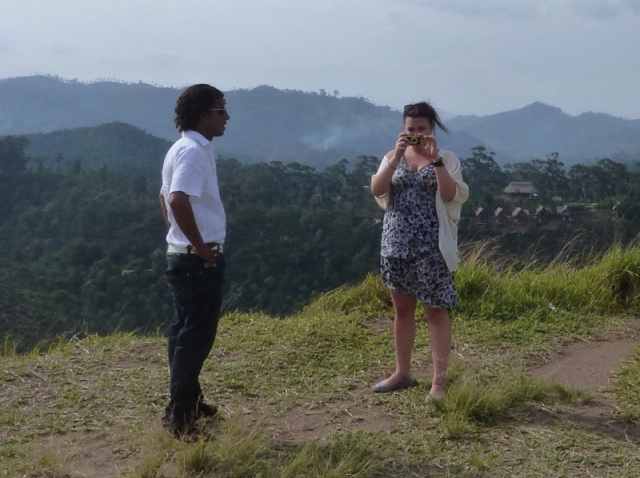 It is not at all hot on this walk as there is a lovely cooling breeze. This climb has been good practice for the steps up the Lion Rock (all 1200 of them), which we will be tackling on our last day in Sri Lanka.

We are then driven to our hotel for the night in Bandarawela, another very odd place with colourful murals covering the walls of long corridors – Ella thought it was reminiscent of a children’s hospital, or worse, an asylum. The room is very large and comfortable, with good quality bed linen and towels for a change. We eat in the hotel restaurant which is ok, though as usual it is overstaffed by very sweet but rather inefficient waiting staff who hover close by whilst we are eating, watching to assess if we are enjoying the food.

The hotel offers a karaoke bar, but we resist the temptation and retrace our steps back to our room, past a very cross-eyed stuffed buffalo head, which has us in fits of giggles.

I set the alarm for a sensible time as we don’t have to depart in the morning until 09:00, and fall asleep immediately.

Trepidatious Traveller - camino blog is about preparing for and walking the Camino de Santiago. Many future pilgrims have found the blog useful and inspiring, and many who have no plans to walk the camino have simply enjoyed the dialogue http://www.magwood.me
View all posts by magwood →
This entry was posted in South Asian adventures, Sri Lanka and tagged Ella, Small Adam's Peak, South Asia, Sri Lanka, travel, Yala National Park. Bookmark the permalink.