Having told you about my Mum, in the interest of gender equality I think I should tell you a little about my old Dad. He was a quiet man – “anything for an easy life” sort of chap. To be honest he was a bit hen-pecked, but would stand up for himself when he could be bothered. My parents did bicker a lot, but there was no doubt that they were devoted to each other.

Their relationship started in a novel way (and I am sure there could be a novel in there somewhere).

Mum became pregnant following a relationship with a soldier in 1947. I don’t know the details, but I believe he was Canadian and returned to his wife and family, probably not knowing the dilemma he left behind. Mum would have been twenty-two and had brought disgrace upon the family. She was not allowed to have the baby (my sister) at home and was forced to put her with foster parents. Mum was devastated not to be able to look after her adored baby full time and set about working very hard so that she could save enough money to leave the family home and rent somewhere where she could care for her child. In March 1949, when my sister was eleven months old Mum had saved enough to put her plan into action. She advertised in a local paper seeking accommodation for mother and child stating that she was widowed because there was such a huge stigma attached to unmarried mothers.

My father answered her advert. I had always known that their relationship started this way, but it was not until after my father’s death (six months after my mother died) when my brother and I were sorting through the contents of their house that I discovered most of the letters had been kept, tied in the inevitable ribbon.

The first letter that my father wrote in response to the advert was missing and my Mum’s reply was somewhat curt, suggesting that something in his letter was deemed inappropriate. But my Dad persisted and was so eloquent in his writing, as I had never known him to be in later life. I always knew my mother was a mistress of the English language but my Dad was a man of few words. I was amazed at his writing all those years ago.

They had a lot in common. Both were politically minded, of a socialist leaning. My Mum was a keen amateur dramatist and Dad was a youth worker for the Cooperative society, overseeing many youth groups in London.

Mum found lodgings with a kind landlady who could look after my sister whilst she went to work. Meanwhile Dad persisted in his letter writing and finally engineered a first meeting with Mum and baby around about the time of her first birthday on 18 April. They fell in love during that first meeting. They were married on 2 June 1949, just six weeks after meeting. Life was not easy, money was tight, but they lived happily together for fifty seven years, bringing up their family that grew to include my brother and me.

They were good hard-working people. Politically active and great believers in a better life for all. They supported each other absolutely.

When my Mum died in 2006, Dad had been suffering from vascular dementia for a while. His short term memory was shot, probably due to his daily 40+ nicotine habit. He found it difficult to understand that Mum had died and clung on to a photo of her.

Just after mum died my house sale completed and I moved to a small property that Dad couldn’t have coped with, due to the stairs. I think he could have been happy in an old people’s home – he loved chatting to other old codgers about nothing in particular. But my brother wanted to look after him, and Dad wanted to go to stay. After only a short period, maybe less than a week, Dad suffered a fall and broke his hip. For various reasons they did not operate straight away and Dad’s health deteriorated. He was eventually moved to a cottage hospital close to my brother’s home where he continued to be neglected by the staff and was released into my brother’s care with support from the district nurses. He died within the week, just about six months after Mum, just short of his eighty third birthday. He shouldn’t have died, he could have lived a happy life for years. The system let him down. And I always felt that I let him down also. He was a good man, he should not have been allowed to waste away.

However, I guess he lost his way when he no longer had Mum to boss him around. He didn’t know what to do with himself. I felt much sadder about Dad’s death than I had about Mum. She fought until the last; he just gave up on life.

Mum was the driving force in the family, but since his death I have realised what a great influence Dad had on me. I use so many phrases that were his, say things in the same manner as him. I am constantly reminded of him and only after his death do I realise how much a part of my life he was and is. 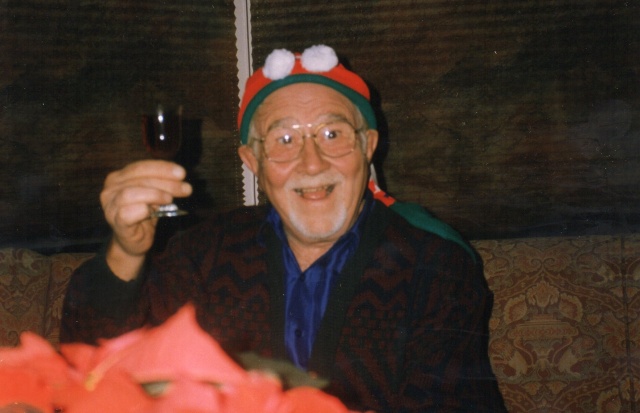 Trepidatious Traveller - camino blog is about preparing for and walking the Camino de Santiago. Many future pilgrims have found the blog useful and inspiring, and many who have no plans to walk the camino have simply enjoyed the dialogue http://www.magwood.me
View all posts by magwood →
This entry was posted in A view of life and tagged Camino blog, Love letters, travel. Bookmark the permalink.

12 Responses to My old Dad