Today I started walking alone. I wanted to get away, but Ella was still in the bathroom and in no rush, so I told her to catch me up.

The sun was rising as I left the village, it was beautiful. 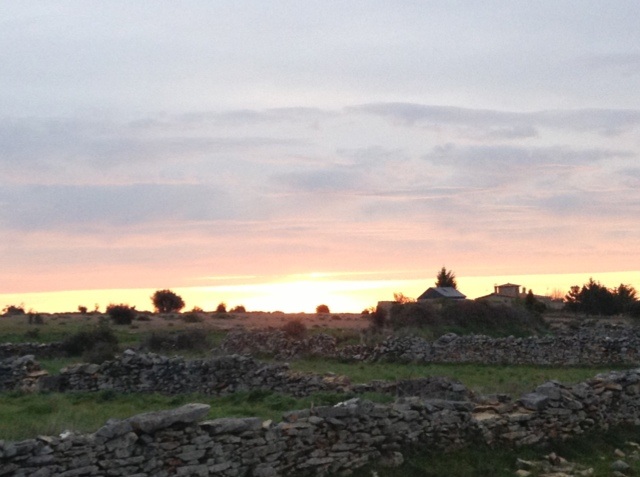 The walk started along a level sand path with the sunrise behind me, scrub land to the right and the ominous looking snow covered mountains to the left.

After 4 km I reached the village of El Ganso where we had intended to stay last night, and by the time I had ordered a coffee and kit-kat for breakfast, Ella walked through the door. It is another beautiful village with ancient buildings. 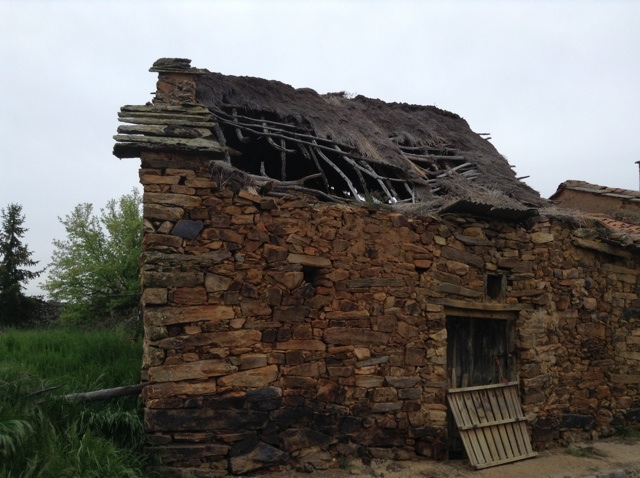 On leaving this village the track began to climb, we passed a fence where people had woven sticks to form crosses – someone had even used a pair of socks! 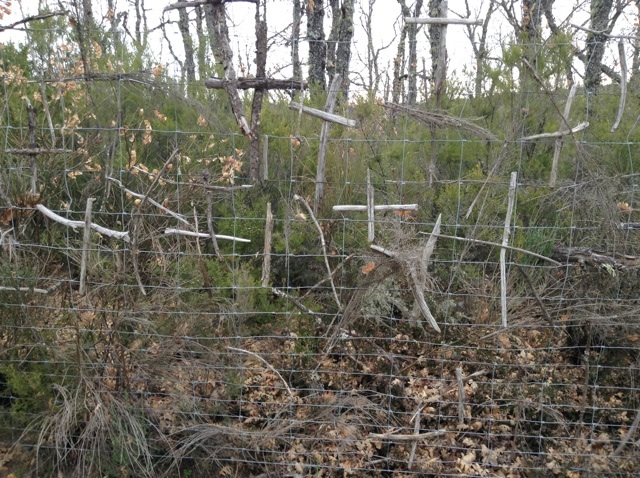 At the next village of Rabanal del Camino (another fabulous place) we popped into the shop but there was nothing very inspiring although I noticed they sold knee supports, so bought another one so I could support both legs. A few yards up the road we came across a stall full of ceramic camino related knick-knacks and we selected a couple of thin discs with the shell sign and the year 2013 impressed upon them and put in a couple of euros. 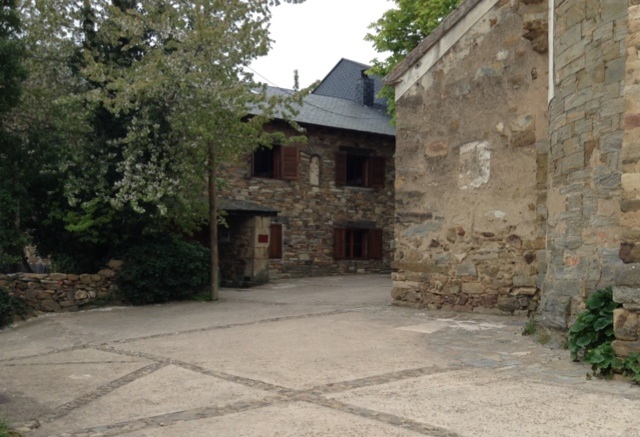 We continued a steep climb up a rough sand and mud path, having to pick our way through very wet, deep mud at times, and after walking virtually 20 km from our start point we finally reached ‘El Cruz del Ferro’, the Iron Cross.

My guide describes it thus:

Where the cross is now located is thought to have originally been an altar built to the Roman god Mercury, whereas some stories say that it is where the Celts worshiped, either way the origins were pagan. The cross is believed to have been placed here in the 11th century by Gaucelmo.
Traditionally pilgrims have left a rock here, whether picked up along their journey or brought all the way from their homeland. Some of the rocks that have been left here contain little messages to loved ones or the name of the pilgrim’s home town. In the holy year of 1982 the little Ermita de Santiago, that you see close by, was built. There is also now a huge sundial on the floor where you provide the shadow in order to tell the time…….

I will make a separate post specifically relating to the Cruz del Ferro. 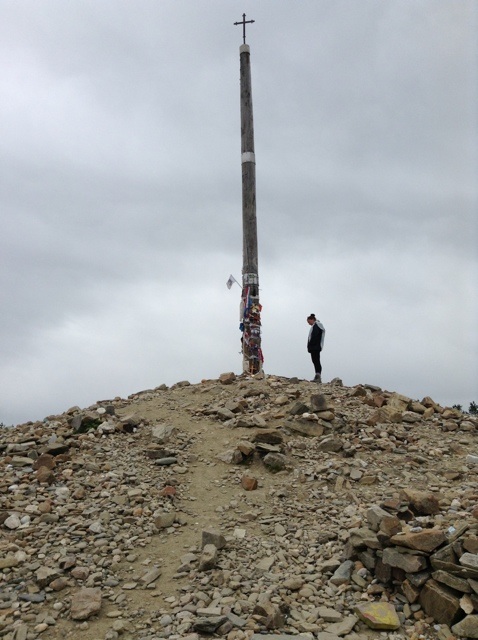 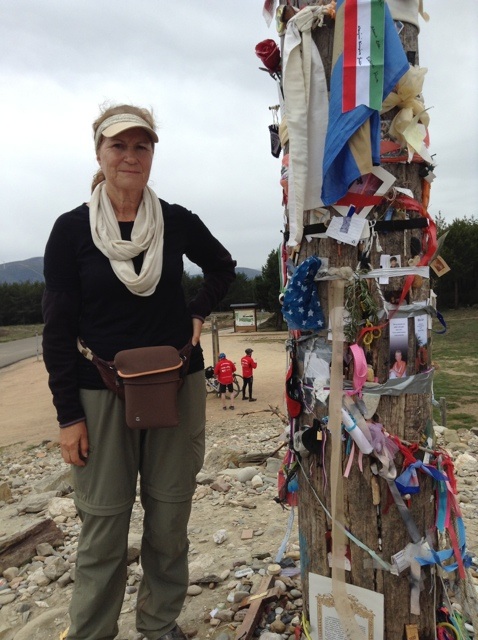 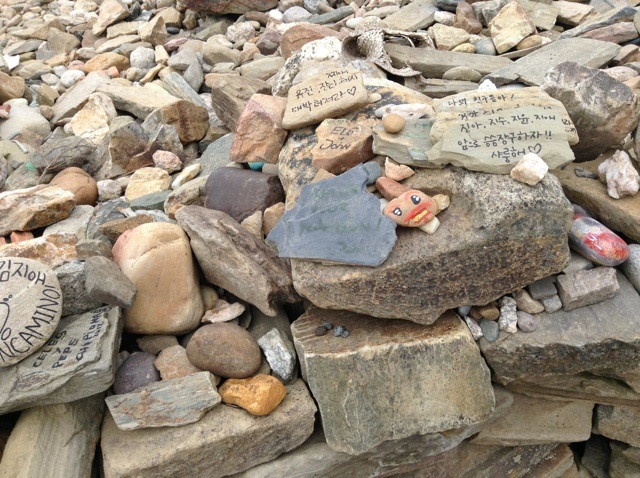 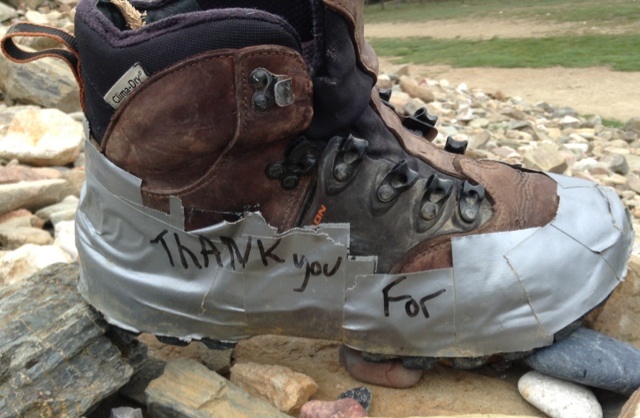 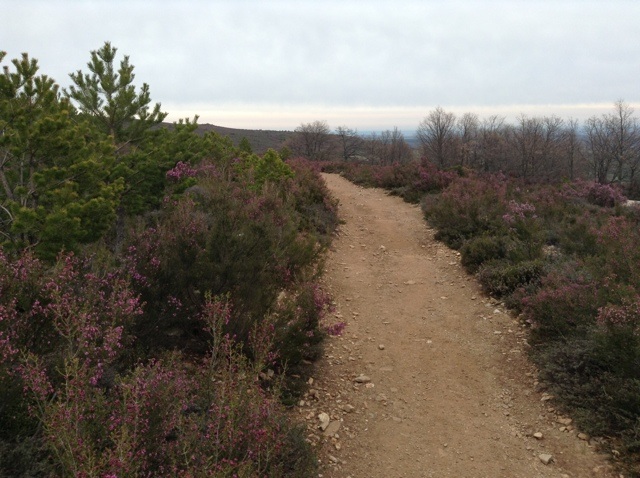 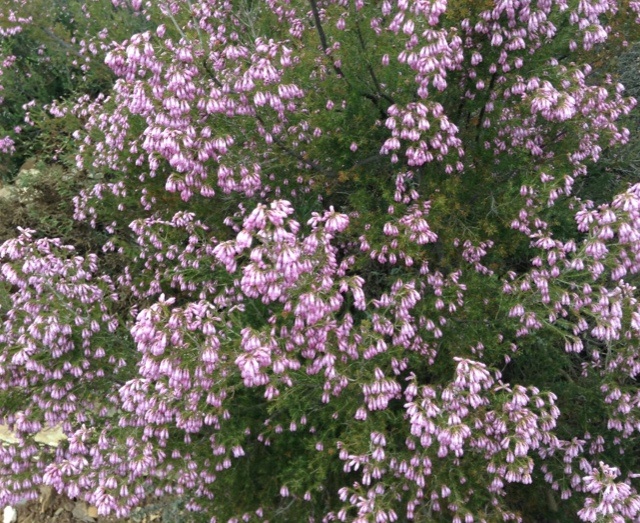 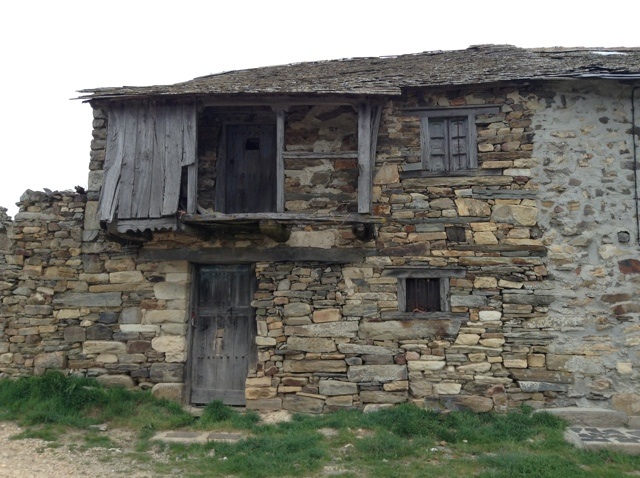 We then started the descent proper and came across William the American we have met on several occasions. After coming across another unmanned stall of goodies for pilgrims we eventually reached the village of El Acebo we stopped for lunch and enjoyed the best meal we have had for many days.

Fortified for the rest of our journey we continued down the very steep track formed mainly of rock and as it had started to rain we had to be extremely careful not to slip.

So far the day’s walk had been good, we had already covered 30 km and I didn’t feel tired at all. It had rained softly but steadily for a few hours and we were all dripping wet. 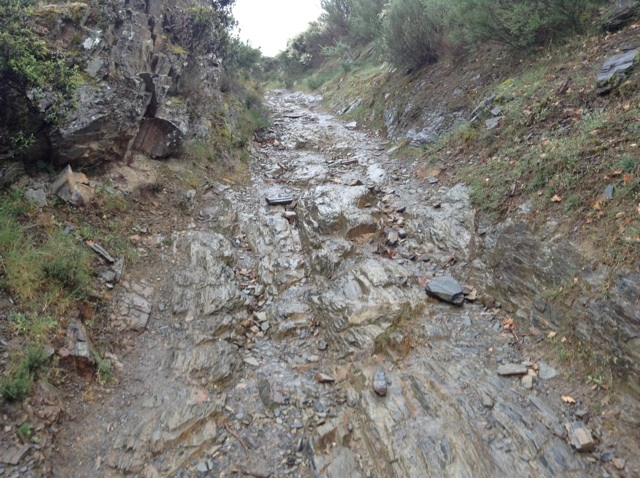 But somehow my spirits soared, the walk turned into magic. The track, although still difficult was lined with white broom and all manner of wild flowers, it was stunning and beautiful. 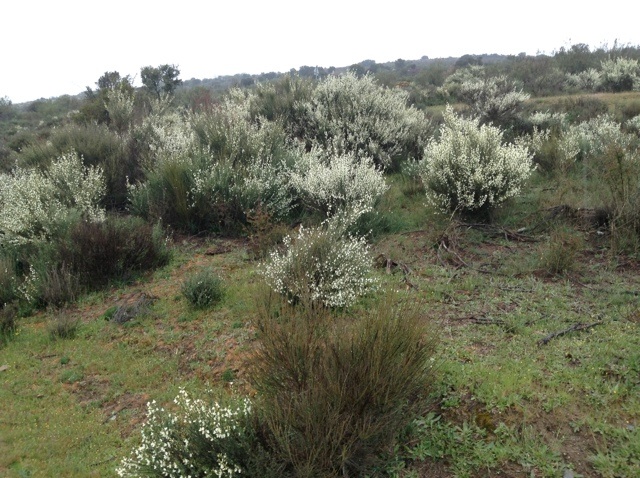 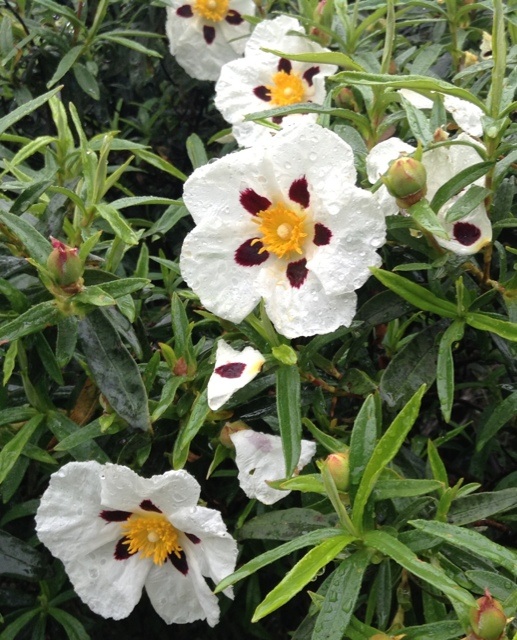 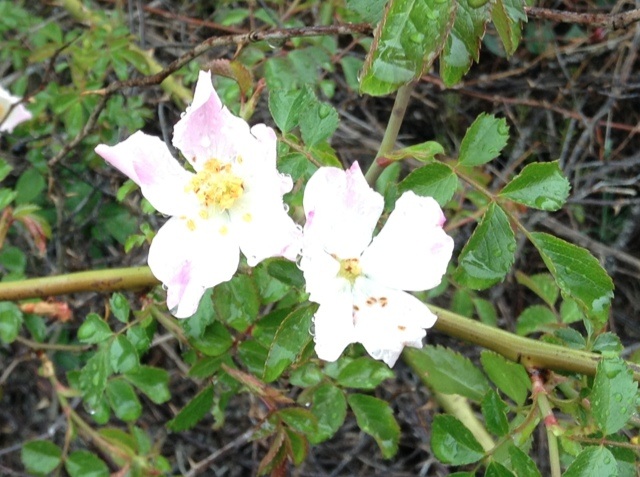 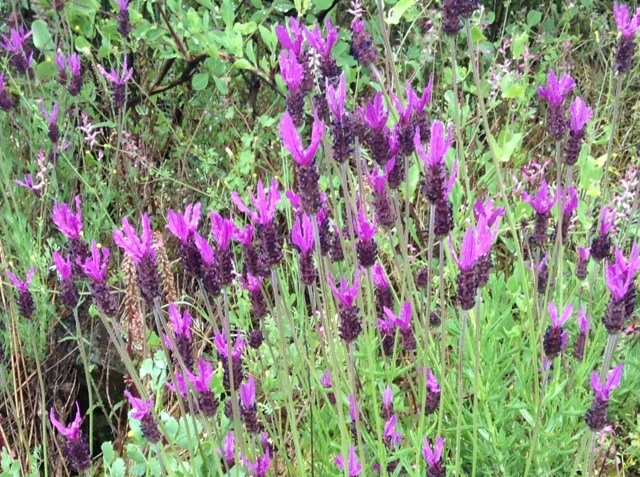 We negotiated our way around a herd of sheep that were using the track and continued through another fabulous ancient village until we reached the town of Molinaseca. I have run out of words to describe how wonderful these villages have been today, but magical sums it up pretty well. 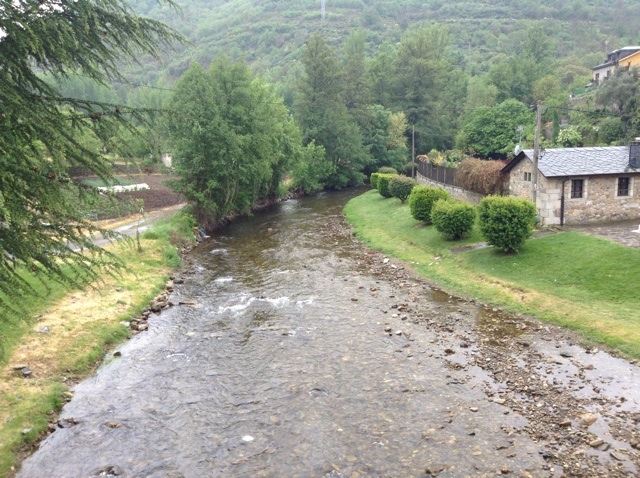 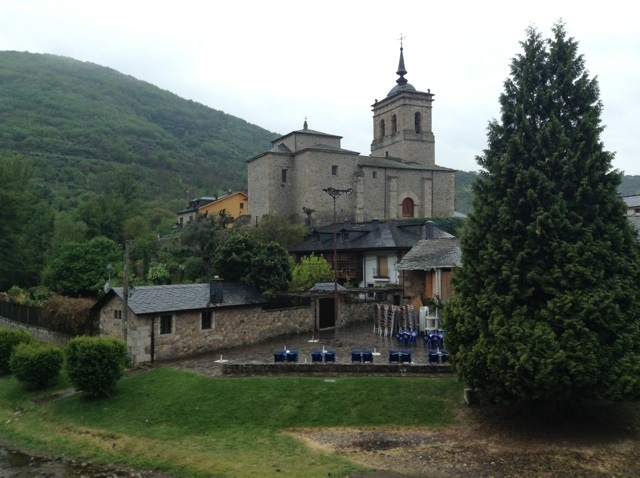 We are staying in an albergue where the dormitories have bunks but they are spaced well apart with enough room to hold a disco in the middle of the room. Luxury after the last two nights of feeling like sardines squashed into a tin.

Today we walked a total of 37 km. I felt good all the way through, and absolutely fine at the end. I also felt good at the end of yesterday’s walk.

The day before yesterday I was worried that I was finding the walking really hard. I never doubted that I would continue to the end but I was really finding it difficult. I don’t know whether I have crossed a bridge and have become stronger or if this is just a temporary surge of energy and strength. I am assuming that I will continue to be stronger and am very positive about the coming days of our camino.