The day started dull but dry, but this state of affairs didn’t last long and before we had passed through the cathedral square I was stopping to put on my raincoat. We were very quickly out of the city and back into eucalyptus woods. After the rain of the previous evening the scent in the woods was lovely and fresh. We saw very few people on the camino this morning, although we did set off very late at 8:45 am so most of those travelling this last leg had probably already left. After climbing steeply through the woods and emerging at the top of the hill we turned and saw the distant spires of the cathedral piercing the clouds.

We were now walking through a very affluent area of large properties with beautifully tended gardens. Someone back in Cómpeta (I think it may have been Irene) told me that I would see lots of hydrangeas in northern Spain, and it is true, they are everywhere, but not yet in flower. I expect when they come to bloom there will be some beautiful blue flowers because the soil here must be very acid as we have seen lots of camellias, azaleas, and rhododendrons growing over the last few days. Also in recent days we have seen that the trees which line the town streets are camellias, which look beautiful for a few days, but the flowers all too soon turn brown to drop to litter the pavements.

There are also lots of foxgloves suddenly growing in the woods and beside the roads in this area, which I haven’t seen on the camino previously.

There have been lots of dogs in evidence all along the camino, ranging from mangy looking sheep dogs (that is, dogs that guard the sheep – not lassie types), through the typical short legged mutts that we know so well in Cómpeta and Canillas, to larger pure breeds. In the areas of the fabulous stone villages, we seemed to see little but Alsatians – and very many of them. But the last couple of days we have seen many boxers, retrievers, and setters. Almost without exception these dogs have been behind gates or tied up and not one has been aggressive. As we were passing through a village today we saw this poor chap. His owner told us the dog had suffered an accident two years ago and lost the use of his back legs, so the lovely guy made a carriage for him to exercise in.

The path took us up many more very steep, seemingly never ending inclines, through woodland and along the road, past streams and wide rivers until we reached the town of Negreira where we have decided to stop for the day, after only 21 km. 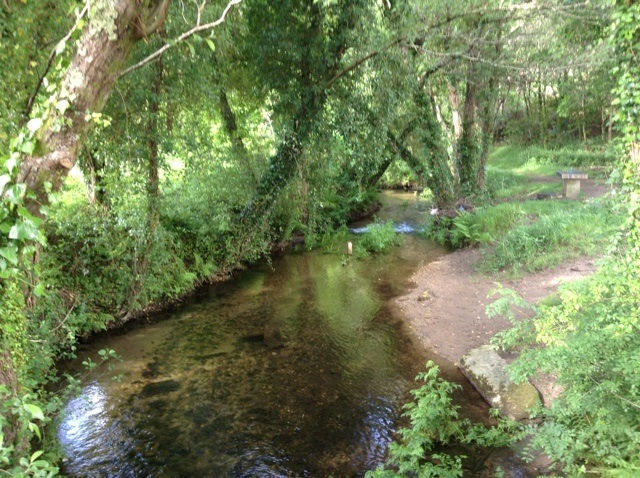 We made a trip to the supermarket and I have just enjoyed the best meal I have eaten for weeks. A huge salad with mixed leaves, tomatoes, mango, cashews and prawns. And Ella is preparing herself something hot (with kidney beans which is a instant put-off for me). So we are both healthily fed for a change, and no wine (also for a change!)