What is it with men and machines?

No sooner had we finished a late breakfast this morning than our spanish friend Paco arrived on the doorstep. Paco is a local guy who does a bit of land clearance for us. What he lacks in stature, he makes up for in the ability to put in a good day’s work on very difficult terrain. He is of indeterminate age, he says he doesn’t know how old he is – could be anywhere between late fifties and mid seventies – it is very difficult to tell with someone who has spent his life in the sun working on the land. He is well under five feet tall and as sure footed as a mountain goat, tackling any slope without fear of slipping or sliding, most often wearing a pair of children’s crocs on his tiny feet in place of sturdy boots.

He has taken to unexpectedly calling at the house, at any time of the day, just to while away some time, I presume. He is not the easiest of visitors, simply because I find it almost impossible to understand what he is saying. Even the most educated local spaniard speaks with a very strong dialect, not pronouncing various consonants and talking at a great rate of knots. I would venture that Paco is not the most educated of locals, added to which he has very few teeth remaining to help him form his words and as a result the conversation does not really flow very well. I am sure he understands what I am saying to him in my rather poor spanish, but once I start a thread of conversation, I am lost as soon as he replies.

This morning I proudly showed him my new toy – not exactly a machine but a long handled pair of shears that I purchased in order to tackle some very long grass growing on a very steep bank above Liana’s stable, and then proceeded to put on my coat and boots and attack said grass. It wasn’t long before Paco came out to join me and he immediately relieved me of my prized new toy and completely took over, scaling the almost vertical bank, snipping at everything in sight, including a few ground cover plants that I had been encouraging to thrive for a few years.

What I had expected to take me most of the morning, leaning down from the top and climbing a ladder from the bottom, Paco completed in about 30 minutes, and then continued to prune my half dead nectarine tree, re-shape several decorative shrubs and close-shave my beloved (but rather overgrown and very straggly) jasmine back into its original arch. Then he handed me back my shears and was gone, leaving me nothing to prune. Oh well, one thing is certain – it will all grow back again and I will have plenty other opportunities to play with my new toy. 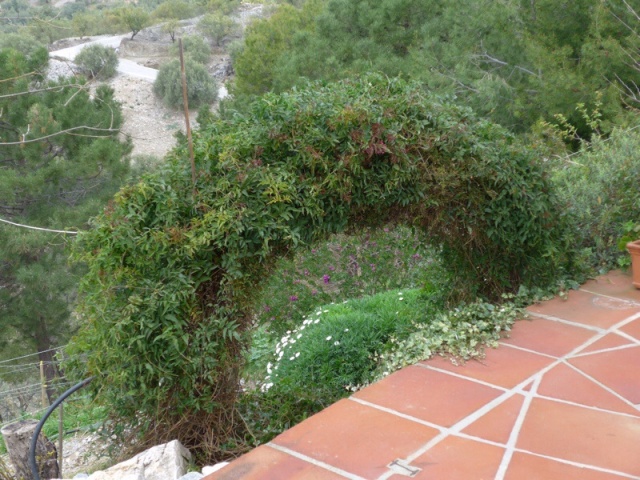 Trepidatious Traveller - camino blog is about preparing for and walking the Camino de Santiago. Many future pilgrims have found the blog useful and inspiring, and many who have no plans to walk the camino have simply enjoyed the dialogue http://www.magwood.me
View all posts by magwood →
This entry was posted in A view of life and tagged garden, Liana. Bookmark the permalink.

10 Responses to What is it with men and machines?