Making my acquaintance with Lisbon

[I have finally found the time to write up my fabulous day sightseeing in Lisbon before setting off on the camino.]

Elly and I left the apartment at about 9:30am in search of some breakfast, which was to be found not too far away in a local cafe. We were both keen to sample the much discussed local delight – pasteis de nata. I ordered a pastry and a couple of coconut goodies and washed them down with a cup of hot water. It was just as difficult as normal to assure the waitress that I simply wanted hot water, no tea bag, no lemon, just hot water. I have this trouble wherever I go. The pasteis was very tasty, a bit too sweet for my taste, but the crispy puff pastry that encased the rich egg custard was delicious. 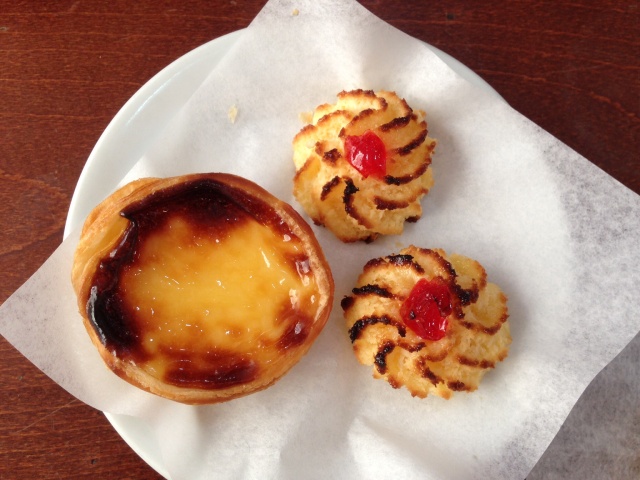 We wandered towards Comercio Square but the streets were remarkably quiet. It dawned on me that it was mayday and everyone must be having a holiday lie-in. We came across some craft stalls selling really attractive items. Luckily temptation to buy was overcome by the thought of having to carry any purchases on my back for over 600 km.

One guy was selling hand made tiles decorated in the style of the cobbled pavements. The sidewalks are paved in small blocks of cream and black limestone in various designs. 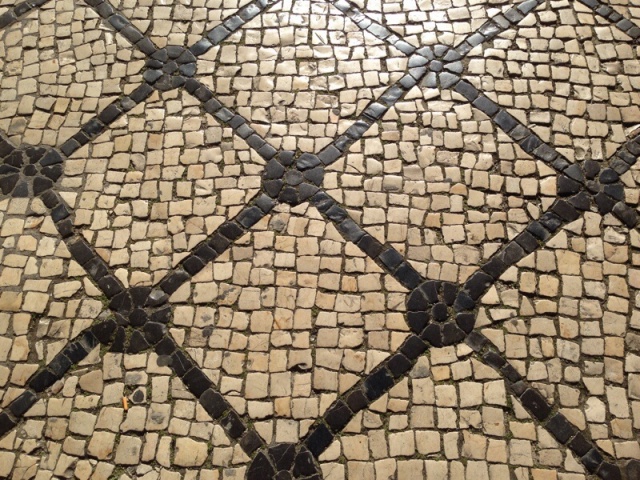 The stallholder spent ages explaining to us what the various designs represented. His tiles were beautiful but not possible for me to buy – except for a tiny tile depicting a scallop shell. As I had forgotten to reattach my last year’s shell to my backpack after removing it when I loaned the pack to a friend, I decided that I could bear the weight of a tiny fridge magnet, with magnets removed and strong double sided tape applied to hold it to my new leather bumbag 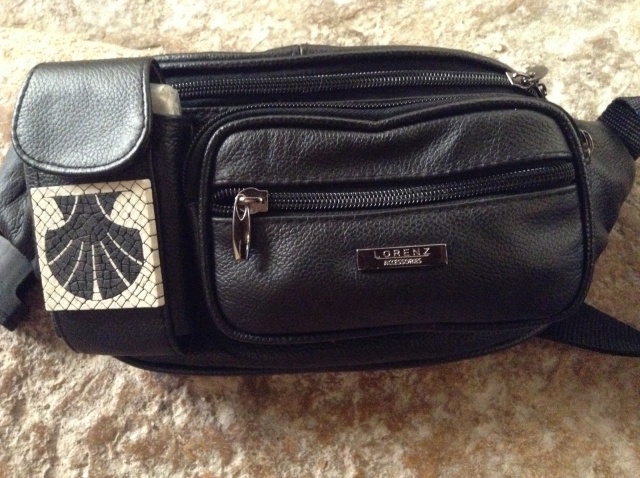 I’m not totally convinced it will hold on until Santiago, but I am very pleased with my new shell, for a long as it lasts!

We then went to find the church of ‘Nossa Señora Dos Matires’ to get the first stamp (carimbo) in our pilgrim credencials, and then wandered off to find a Metro station to buy a daily pass for the tram system. Once purchased, we tried them out on one of the two trams we have discovered that solely traipse up and down a couple of very steep hills.

Once at the top of the hill we came across a national police exhibition, displaying uniforms through the ages, police vehicles from way back, and an interesting blow by blow account of the revolution in 1974, in which an army rebellion overthrew the fascist dictatorship. A very interesting hour or so.

We then realised we were close to the top of the intricate steel tower of the Santa Justa Lift, an elevator that was inaugurated in 1902 that takes passengers from the lower to the higher levels of the city. Atop the elevator tower is a viewing platform and I took a great photo of this from a balcony in the police exhibition building. 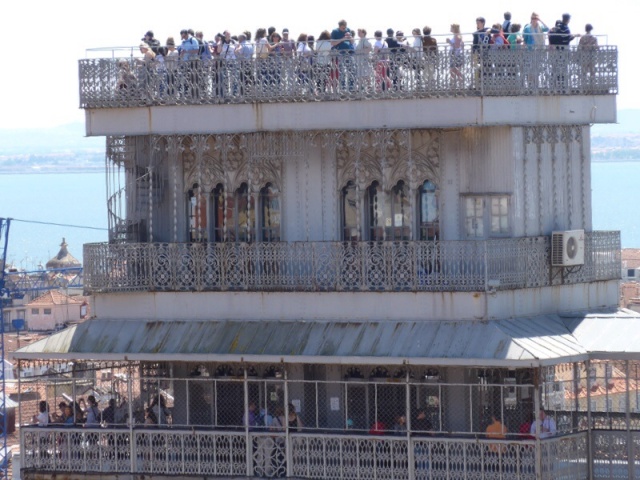 And as we approached the top of the tower we passed by a very inviting restaurant and shared a dish that we saw the waiter preparing for other diners, and looked too good to resist. A portion of spaghetti was dropped into an enormous scooped out Grana Padano cheese, mixed with shavings of cheese and rich sauce and topped with jamon, and presented in individual turrets. It tasted as good as it looked! 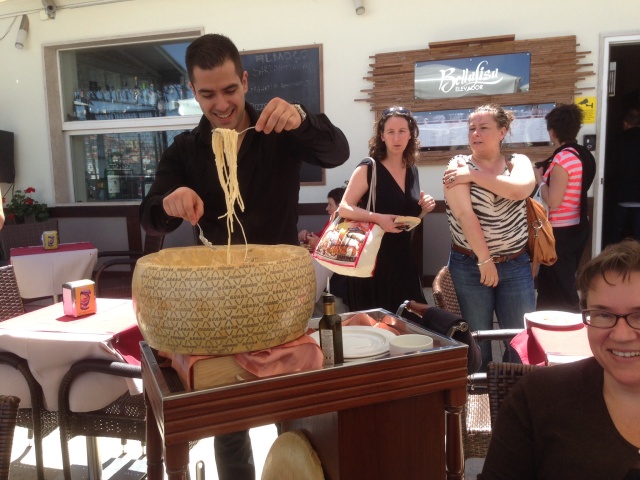 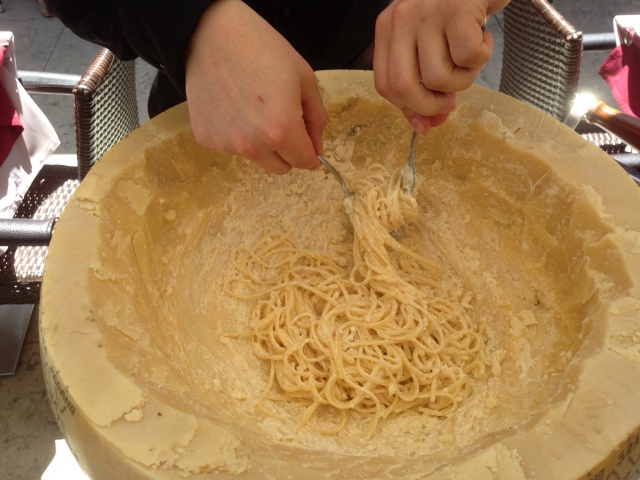 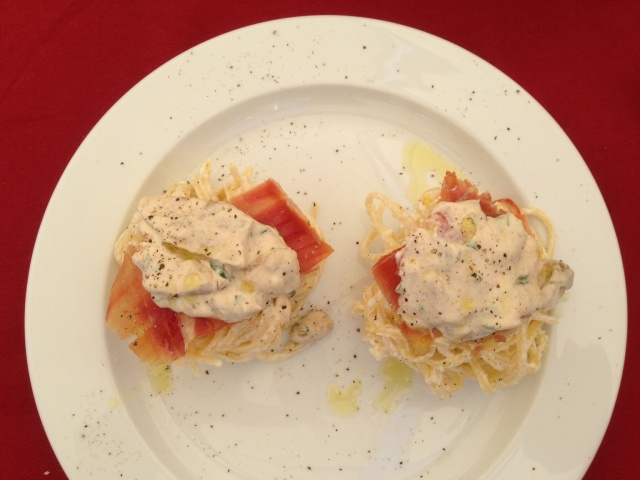 After lunch we took the elevator down to the lower level and were greeted by Aurélio and his wife Rita. Aurélio lives in Lisbon and is a member of a camino forum that I belong to and has been very helpful with suggestions and answering questions. It was lovely to meet him after communicating over the internet. He and Rita took us to a cafe for coffee and another pasteis de nata, this time eaten in the traditional way with a shake of cinnamon and icing sugar, accompanied by the tiniest cup of strong black coffee I have ever seen. Now, I drink hot water because I don’t actually like coffee, but of course I couldn’t refuse, and I was surprised that I actually enjoyed the taste, lno.the bitterness of the coffee being counteracted by the sweetness of the pastry.

Our new friends then spent half a day of their precious mayday holiday showing us around their city and pointing out things of interest that we would never otherwise have known about. They were so kind and patient, answering all our questions and taking us to the cathedral to get our second carimbo on our credencials. We eventually parted from them at 6pm and then we took the number 28 tram for a full ride from one end of the circuit to the other, and then back again. 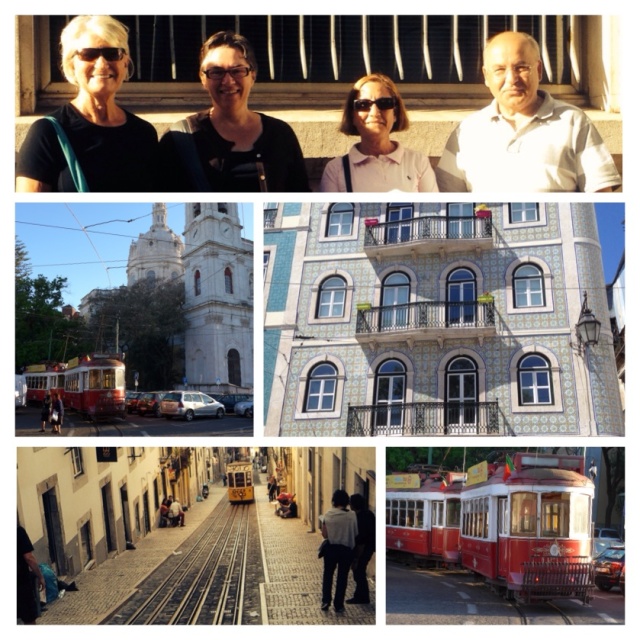 The trams are all part of the fun of being in Lisbon and can turn up three or four at a time, or leave you waiting for twenty or thirty minutes without appearing. 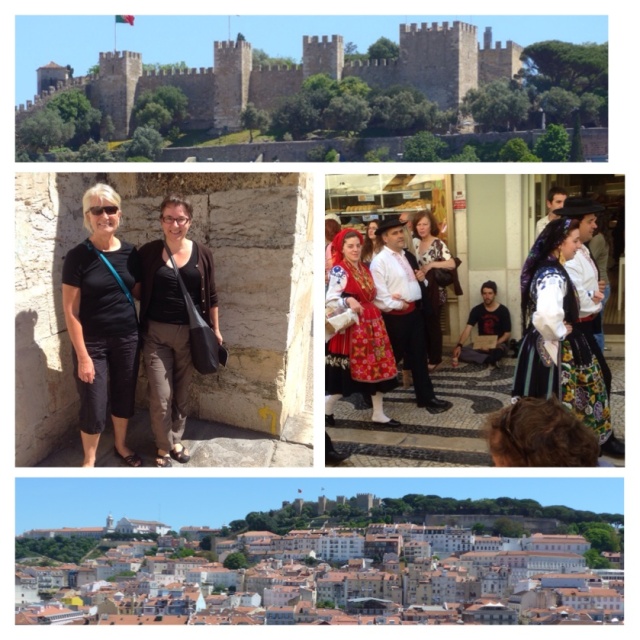 Elly and I then had a quick bite to eat and found our way back to the apartment via a different route to usual, taking in a different view of the city by night. 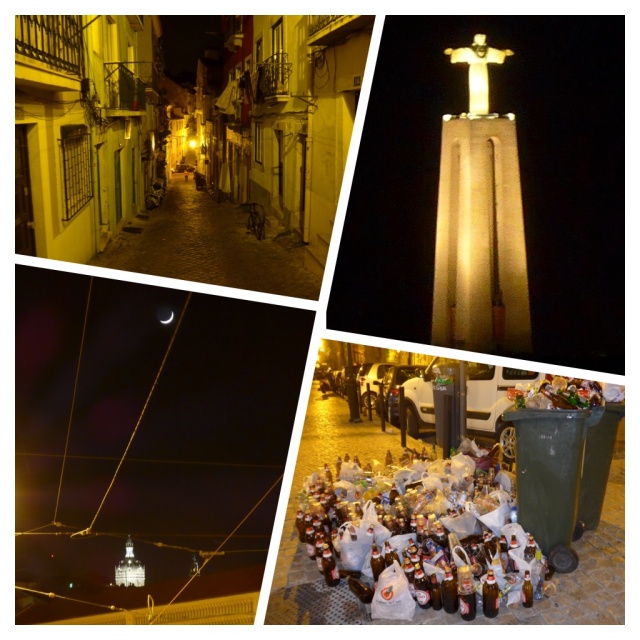 Lisbon is a fabulous city, quite compact and easy to negotiate and most of all, great fun. I would love to come back for a more relaxed visit.

16 Responses to Making my acquaintance with Lisbon