I forgot to put in yesterday’s post that Fernanda first took in a German pilgrim who was in dire need of help and had been turned way by all she approached. After first also saying no, Fernanda had a chnge of heart and took the woman in, which became the start of her hospitality to pilgrims from all over the world. She thinks that in the intervening years she has put up somewhere between 25,000 and 30,000 pilgrims.

It was good to see the American family again yesterday. But if I keep up my distances I don’t suppose I shall see them again. Leah, Sharon and Anil, it was great to know you. I wish you a truly great camino with no more unexpected diversions!

I set off before breakfast was served this morning and was met by a brightening sky, dry weather and a slight chill in the air. I even put my gloves on for half an hour. It was a fabulous morning and I walked along through woodland and farmland to a chorus from blackbirds, a cuckoo and a woodpecker. I love to see the vines growing on frames that pass right over the roads – it looks so pretty.

I came across these very odd structures for hanging hay from – I saw a few along the way. 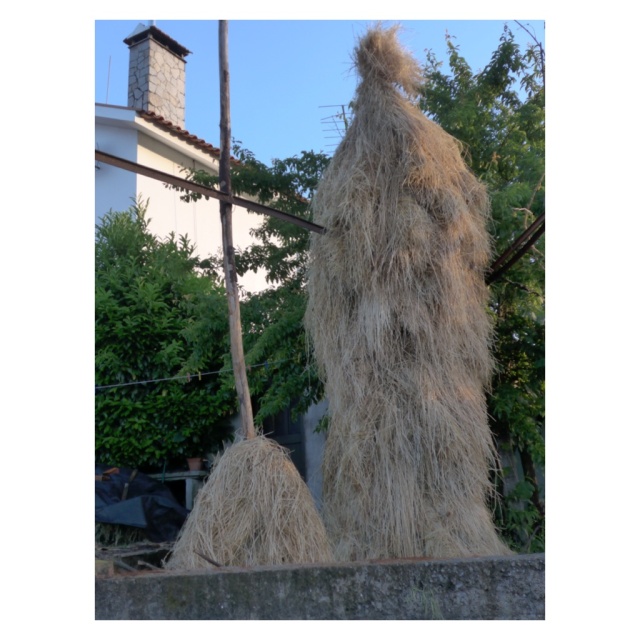 For a while the trail took the form of every pilgrim’s dream – compacted sand – so nice to walk on after all the cobbles. And all the way to Ponte de Lima the track meandered between woodland and villages – progress wasn’t very fast because I was stopping every few minutes (or seconds sometimes!) to take pics. I didn’t meet a soul during 15 km – apart from a few farmers – it was bliss. You will have to let me know if you are bored with raindrop photos, sorry but I just can’t resist them. 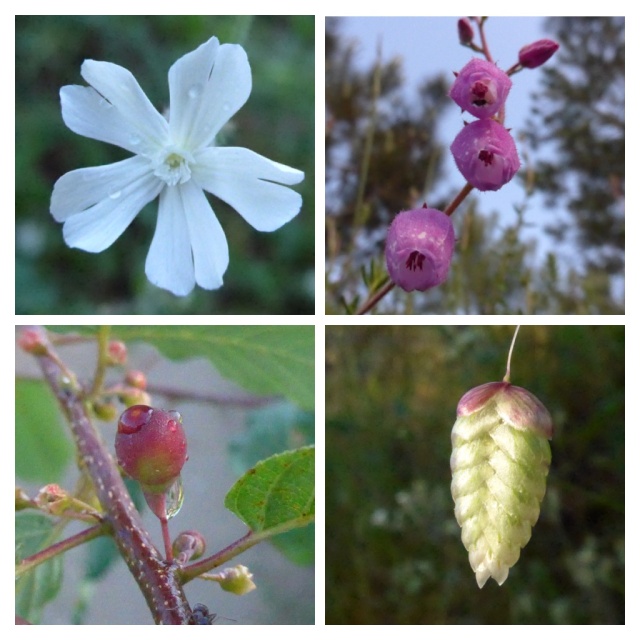 I also couldn’t resist these scallop shells that were hanging by a thread, high above the track, outside the walls of a Quinta.

I was passed by several groups of cyclists today. There seem to be a better class of cyclist on the Portuguese route, they are all extremely polite, give good warning of their approach and and always greet me with a bom dia and bom caminho (not at all like the ruffians on the Frances route!)

This little chap posed for a couple of photos on the outskirts of Ponte de Lima – who can possibly resist the charms of a robin? 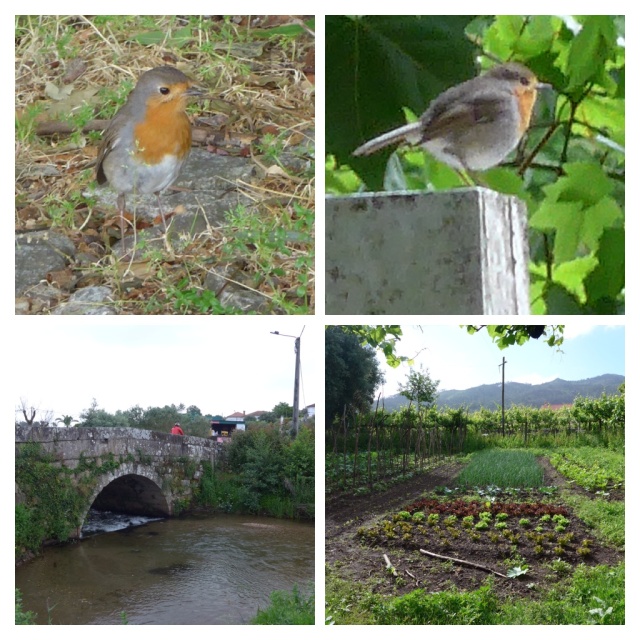 The approach into Ponte de Lima is most attractive along a beautifully cobbled avenue of towering lime trees – very majestic, but just as I reached the far end it started to rain quite hard, so I quickly dived into a cafe for a mid morning break.

Once I left the town the track became very muddy and quite difficult to negotiate, with deep puddles running the full width of the path and for many meters.

After a while I came to a long stretch where some kind person had put a layer of sand along the way and soon enough I could thank him for myself. 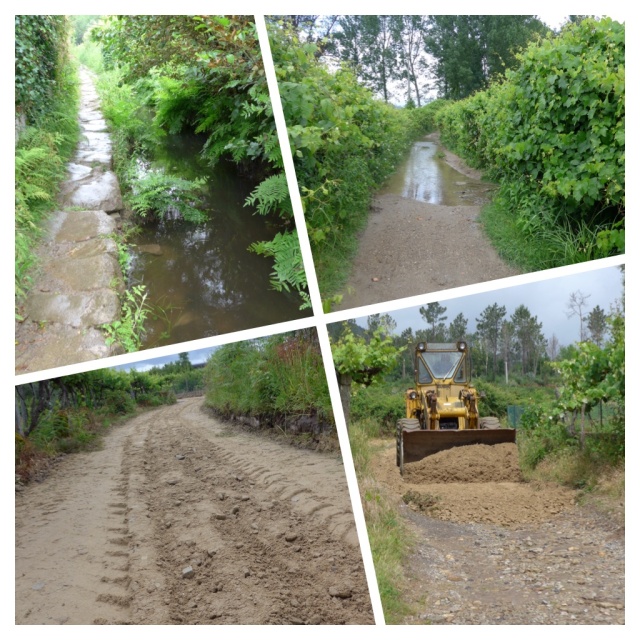 I came across a pile of mini cobbles, either just taken up or waiting to be laid. These very small cobbles, just a couple of inches across, are perfectly comfortable to walk on. It is the bigger ones that hurt so much. 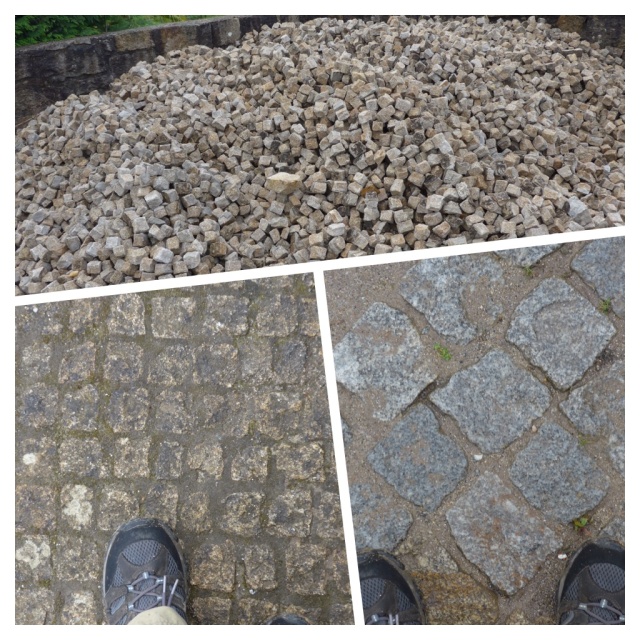 I’ve noticed that all the cemeteries I have passed all have real flowers on the graves, always fresh and beautiful. No long-lasting plastic ones here.

Once the other side of Ponte de Lima there is a huge climb to be tackled. I thought (once again) that a big fuss was being made of nothing much. The very steep paths were interspersed with a section of flat track and were quite comfortable to negotiate. However once again I was wrong – the actual climb hadn’t started yet, and when it did, there were no flat areas, just 5 km of extreme assent. However it was a stunningly beautiful walk and I plugged into some music to give my legs a little encouragement.

Deep into the woods there were countless pines that had been tapped for sap, but here the sap is collected in polythene bags. When I first saw one, I thought it was a pag of pee that someone had left propped against a tree – although I can’t imagine for a moment why anyone would pee into a bag in the woods. However it soon became apparent what was happening, there were so many of them. I gave one of the bags a poke and it was totally liquid, not at all viscous, which surprised me. They were all full, so I expect someone will come to collect them soon. Do they empty them I to a container or do they seal the bags? So many questions, and I don’t expect I shall get to know the answer. 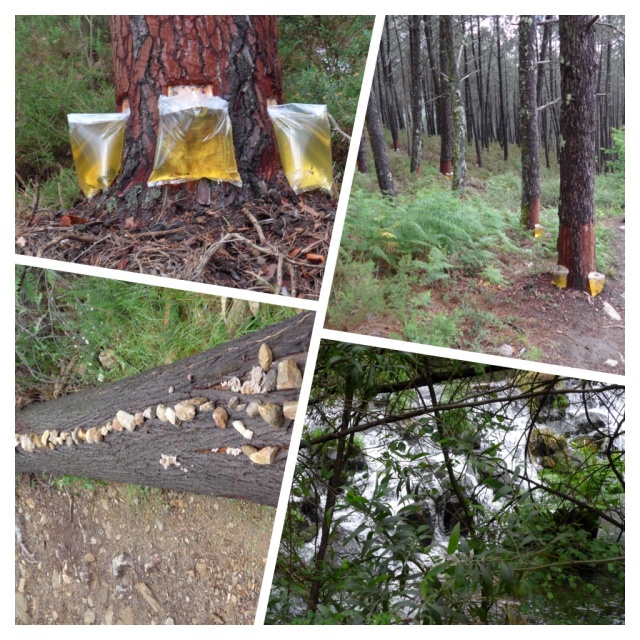 There were several stone crosses where people had left stones and mementos, and I added a couple of stones, one for my parents and one for Charles.

As I neared the peak at Alto da Portela Grande I came across a flat-ish platform of land from where there was a stunning view down into the Lima Valley. As I removed my earplugs I could hear machinery and then heard a tree coming down. As I walked around a bend I was confronted with my second dumper of the day, pulling the felled trees into place and I had to wait for him to move off the camino path.

The descent was not so steep, but certainly steep enough, on slippery stones and rock. It was good to get to the bottom, whereupon I met with my third camino machine which was hauling huge stones for the builders of another new and beautiful stone wall. 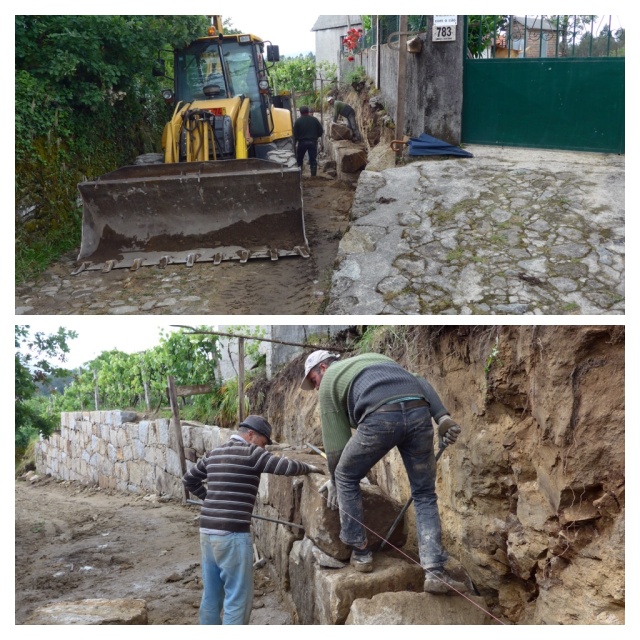 Once again, I was entirely alone – as I have been all day. I rather like it. Although walking through the woods I thought this tree was giving me the evil eye. 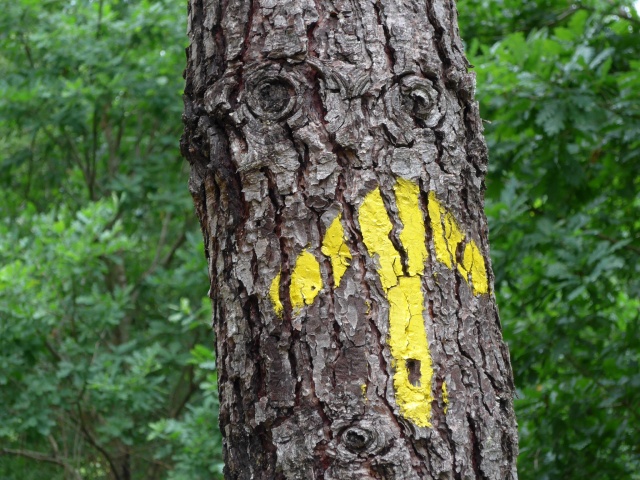 A little further on I came across one of the Australian guys from a couple of nights previously and he and another of their party are staying in the same accommodation with me tonight, which was recommended to me by a couple of guys from Fernanda’s last night. They had met on the camino Frances and didn’t want to stop when they reached Santiago so continued to walk the Portuguese route in reverse. This is quite easy because there are arrows all the way beyond Porto that point towards Fatima.

The accommodation tonight is fairly new and called Ninho. It is a little further on from the municipal albergue. There are 9 or 10 beds, some bunks, some singles, a bathroom with two showers and two loos and a nice kitchen lounge area. Breakfast is included and I was invited to eat when I arrived. The cost is 15 euros, which is a bit expensive I think. Linen and towels are included and the owner is very attentive.

I’m glad the Aussies have turned up. The only other person here when I arrived was a sickly German guy who has been suffering with food poisoning he thinks and was not great company.

This has been my second quite long day, but my feet are holding up well, even with all the cobbles and rocks I encounterd today. I am enjoying the longer distances – I like to get going early in the morning and don’t like to stop too early in the day.