It started with a bang……..and ended in disaster

A volley of rockets was launched at about 7 am to announce the forthcoming party. It was a beautiful clear morning, albeit rather windy, and I was in the stable preparing liana’s breakfast. As usual she took absolutely no notice of the loud explosions, being interested only in her food.

Yesterday (Sunday 29 June) the village of Canillas de Albaida celebrated San Juan, with a fiesta at our wonderful picnic and recreation area – La Fabrica de la Luz. As soon as Liana had finished eating I set about making her even more beautiful than normal and plaited her tail and mane ready for David to ride her in the romeria (procession). David likes this type of social riding, whereas I prefer to wander the mountains on our own, so I was very happy for him to be in the driving set for this occasion.

He left to join the assembling villagers whilst I washed off the stable dust and got changed before setting off about an hour later, expecting to be walking alone the few kilometres to La Fabrica. A couple of mountain streams converge here and there is always plenty of water for people to enjoy splashing about. There are various areas with picnic tables and barbecues for use only during the winter months. It is a much loved and well used facility.

Although an extremely hot day there was a strong gusty wind and
as it happened I came across the party after less than a kilometer as the procession of villagers on foot, horses and mule drawn carriages, a couple of vehicles with decorated trailers full of pretty girls all in their flamenco finery, had all come to a stop for the first refreshment break where beers and soft drinks and filled bocadillos were handed out to one and all.

I still haven’t got to grips with all the many fiestas that the local villages celebrate. On this occasion the statue of San Juan was taken from the church and carried on a beautifully decorated mule drawn cart. It was a charming and happy event with people of all ages making the journey to celebrate an outdoor mass at La Fabrica and then to party. There was music and singing along the way, with one guy who was playing a whistle with one hand and banging a drum with the other, and now and them one of the old guys would break out with a haunting flamenco song. The sense of community in these villages is wonderful and I feel really honoured that I am allowed to join the festivities.

On arrival, the horses were tied up in the shade, those that chose accompanied the icon to an area for the mass where the ladies’ choir, all dressed in their matching flamenco dresses, sang hymns. And then it was time to party. A bar had been set up, mountains of food had been prepared, a canopy of striped tarpaulin had been harnessed between the trees to provide shade, and the giant audio speakers were assembled.

A (fairly) orderly queue had formed to wait in line for the food (3.50 euros could purchase a huge bowl of braised pork and a beer or soft drink). We were sitting near to the food so were able to be at the front of the queue and managed to start eating before the alcalde (mayor) of the village stood on a level above the crowd and tried to get everyone’s attention. He was eventually able to announce that a serious fire had broken out near to the village and that everyone must leave the area straight away as there was a danger of being trapped by the fast spreading fire that was being driven in all directions by the strong hot winds.

The last photo shows the first sight of smoke rising above the mountain.

Our village is on the very border of the Parque Natural, a vast protected area of pine forest and scrub land. We were told by a Guardia Civil officer that the fire had started on the goat track, only a couple of hundred meters from our house. We had the horse and the dog with us and were sure that the cat would look after herself, but I was very concerned for my neighbour who has a riding stable with probably 15 or more horses, so whilst David rode back to the village I got a lift up to my neighbour’s house to see if she needed any help.

The smoke and flames were alarmingly close and there were many helicopters and planes dumping water on the various areas of fire which was spreading in the gusty wind. Fortunately for us (although of course very unfortunately for others) the wind took the flames away from our property and towards Cómpeta. 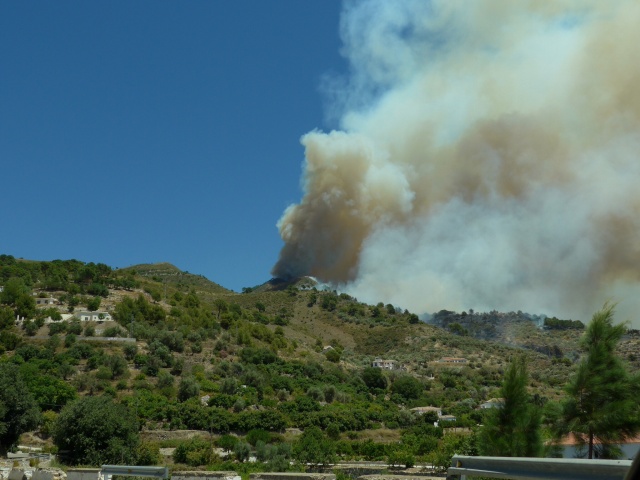 The helicopters were sounding sirens and buzzing to and fro to Lake Vinuela to fill their giant buckets with water and empty it on the flames. There were also water collecting planes and reconnaissance craft and personnel carrying helicopters dropping firefighters at the scene. Reports say that there were seventeen aircraft in total working from about 2pm on Sunday and still operating this afternoon (Monday) at 5pm dropping water up behind our property.

Several of my friends were among the 500 evacuated during the afternoon from housing developments high above Cómpeta and I have heard that three properties were completely gutted in the area of Cruz del Monte. As far as I am aware there was no human casualty although I don’t know if any domestic animals were caught in the blaze, but I have seen a photograph of a dead ibex. The fire was very close to the town of Cómpeta and apparently there were warnings to be aware of many snakes in the area that have been coming out of their normal habitat to seek shelter from the heat. Ash was said to be falling as far away as Nerja on the coast.

A control centre was set up from where the fire fighting operation was directed and monitored. The disaster was reported nationwide on many TV channels and in the press, and even in the Telegraph newspaper in the UK. It was reported that the fire had been brought under control at 9 pm

After dark the mountainside was lit up like a Christmas tree with pockets of fire. An amazing sight that I have only seen by photograph.

I walked the dog at 7:30 this morning and took the goat track towards Cómpeta to take a look at the damage done there. I saw these firefighters descending from the mountain after a long hard night protecting us, and another group taking a break high above me. And the helicopters had started dumping water again.

It makes sense to me that the fire did start in this area, it was directly bordering the much used path that connects the two villages. It would not have travelled in this direction from elsewhere because the wind was gusting the opposite way. I have heard a rumour that someone was clearing some land with a strimmer and when refilling, the petrol ignited. It is a feasible explanation but I am sure there will be many such rumours over the coming days and weeks.

From the goat track this morning. Many olive trees look as though they might survive, but the olives don’t look too healthy!

We drove to the Fabrica this afternoon, rather belatedly, to see if any clearing up was needed. The place was spotless, with no sign of the abruptly abandoned party. Helicopters were still dumping water at 5pm and we could see the devastation high up in the natural park. It is reported that around 100 hectares (250 acres) of land on the edge of the Sierra Almijara have been affected.

All is quiet now at 7 pm and I haven’t heard any aircraft engines for a while. Hopefully all is well and truly under control and our supremely brave firefighters can have some well earned rest.

Trepidatious Traveller - camino blog is about preparing for and walking the Camino de Santiago. Many future pilgrims have found the blog useful and inspiring, and many who have no plans to walk the camino have simply enjoyed the dialogue http://www.magwood.me
View all posts by magwood →
This entry was posted in A view of life, Expats in andalucia, Horse riding in the mountains of andalucia and tagged Canillas de Albaida, Cómpeta, Cómpeta fire, Fabrica de la Luz, fiesta, fire fighters, romeria, San Juan, Sierra Almijara. Bookmark the permalink.

36 Responses to It started with a bang……..and ended in disaster