Hosted jointly in a charming courtyard setting by Bar Fernan and El Recreo, the event kicked off at 7pm with live musical entertainment, right through until about 12:30 am. There were African drummers, the delightful and talented Ella, an eclectic set from the ‘Booze Brothers’, our friends ‘MPG’ who just get better and better, and finally my favourite rock band ‘Guiri’ rounded off the evening. All artists donated their services to the cause.

I hadn’t previously been inside the new bar ‘El Recreo’ and I climbed to the roof terrace to be rewarded with some lovely views down onto the revellers, and in the other direction past the church tower towards the main square Plaza Almijara.

There was an almost full moon rising at the same time as the sun was creating a splash of colour as it sunk behind the mountains. 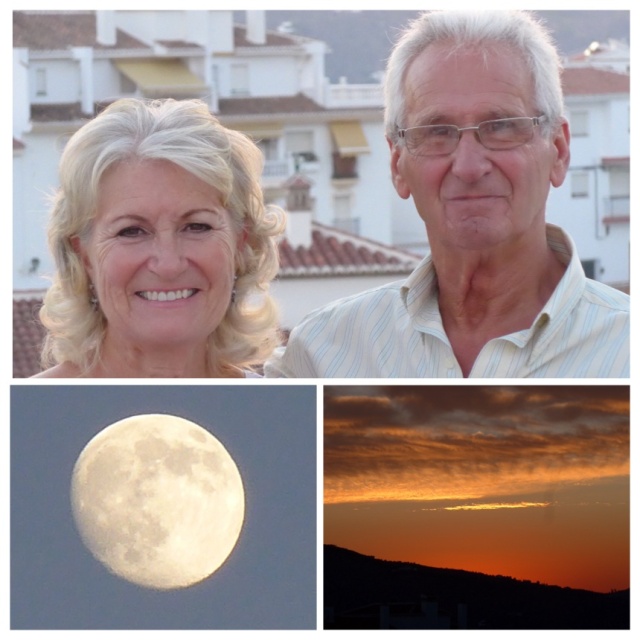 Meanwhile our taste buds were treated to a grand buffet which would have been acceptable at the finest occasion, all prepared by a team of hard working volunteers. There wasn’t much food left on the plates at the end of the meal! A few lucky guests won some fabulous raffle prizes, including a half day cruise.

Those of us attending from the outset paid a mere 15 euros for our tickets, including the food and a welcome drink. But at 9pm the doors were opened to one and all for a small charge of 3 euros and the crowd swelled to fill the space. The atmosphere was superb, with a great party vibe and with much dancing.

As darkness fell, the views became more dramatic and the beautiful church tower shone bright against the black sky. A fitting end to a excellent evening. I can’t imagine that an event could have been better organised. Well done to all involved – thank you!

Trepidatious Traveller - camino blog is about preparing for and walking the Camino de Santiago. Many future pilgrims have found the blog useful and inspiring, and many who have no plans to walk the camino have simply enjoyed the dialogue http://www.magwood.me
View all posts by magwood →
This entry was posted in A view of life, Expats in andalucia and tagged Bar Fernan, Cómpeta, Cómpeta Rocks, El Recreo, Expats in Andalucia, Guiri, MPG, Spain, travel. Bookmark the permalink.