David (and Maggie) versus Goliath

I’ve been away for a very long time, leaving Spain for the UK on 2 December 2014 to help out with my beautiful premature granddaughter, and only returning today on 1 January 2015.

A lot of ‘stuff’ had accumulated during that time 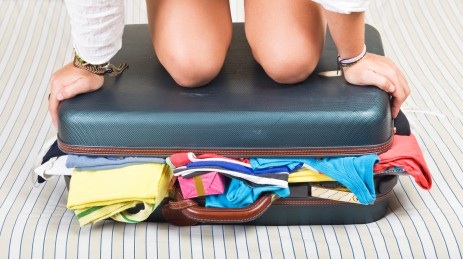 It was fairly obvious that all this extra stuff was not going to fit in our carry on cases, so I bit the bullet and paid £18 for a 20 kilo hold bag.

Now I didn’t have a bag that would hold 20 kilos of stuff, but we had two smaller spare bags that together totalled 20 kilos. And so we set off for Gatwick airport bright and early this morning (well, early anyway, it is January 1st after all), with two bags each.

We confidentially approached the baggage drop area and hefted the two bags onto the weighing belt. As expected they registered just shy of 20 kilos. But, as you may have guessed, there was a problem. The kind man behind the Easyjet desk informed me that the weight had to be presented in one bag, not two. Two bags would involve the payment of an additional £30. But he was helpful and suggested that we might go over to the bag wrapping stand and get the bags conjoined for £10.

Over we trotted only to be told by the not do kind attendant that joining two bags in one wrap would involve two fees of £10, with no guarantee of a successful bonding due to the fact that both bags were soft bodied and different shapes.

We retreated to consider the situation. We didn’t want to pay the bolshy bloke on the wrapping machine for a job we weren’t confident would be accepted. And then I remembered that amongst the household ‘stuff’ in my bag were a couple of rolls of cling wrap. (Please note that cling wrap is available in Spain, but there was a good reason for me wanting this particular type – I won’t explain – you won’t be interested).

So we both removed our belts and tried to attach these two irregular shaped bags together and wrap them in domestic cling film. I have to say that the only success in our endeavours was to keep a few weary travellers amused for a while. The film was intended to wrap a pork chop, not join two cases in readiness for an adventure along the conveyor belts and thrown hither and thither by uncaring baggage loaders. So we resigned ourselves to paying the £30 charge for an extra bag (£18 if booked in advance) and stuffed the cling film back in the bag and rejoined the queue for the Easyjet check in.

Whilst we were inching forward ever closer to our unwanted expense, David hatched a cunning plan. How about if I checked in my bag as planned, and volunteered my carry on bag to go in the hold. This is usually an option (without charge) as there are always too many carry on bags for the amount of space in the overhead lockers. Meanwhile David would take the other two bags and wait for me, and then we would take one bag each as carry on.

Ha! We could get one over on the big guys – it just needed a bit of creative thinking.

Two bags were duly checked in for the price of one, I joined David, took one of his bags and rather smugly made our way to the boarding gate.

We were so close to winning the day, but hadn’t counted on an over-zealous, over-observant boarding gate clerk who saw on his screen that I had checked in my carry on bag, but was still in fact carrying on a bag. And guess what? The charge for the extra bag at the boarding gate was £45. Huh! So much for cunning plans!

Trepidatious Traveller - camino blog is about preparing for and walking the Camino de Santiago. Many future pilgrims have found the blog useful and inspiring, and many who have no plans to walk the camino have simply enjoyed the dialogue http://www.magwood.me
View all posts by magwood →
This entry was posted in A view of life, Expats in andalucia and tagged carry on baggage, David and Goliath, Easyjet. Bookmark the permalink.

12 Responses to David (and Maggie) versus Goliath