There were ultimately no disasters relating to the top bunk – I took a chair from the dining room and once standing on this was able perch my bum on the bed and swing my legs up. Most ladylike! However this morning was a different matter. I was ready and out the door well before 07:30 and was merrily striding out when I realised I was not wearing my visor. This home made head-gear has been worn every step of the way on two and a half caminos, but I thought twice about turning around and going back to fetch it. In the end common sense prevailed and I turned tail after virtually one km and headed back into town. I first came across the slow-coaches who I shared my room with last night and they said that lovely Hungarian Andrea had found it and passed it to lovely single French guy (not single as in eligible, but single as in walking alone – not one of the four French guys walking together). As I was approaching the Albergue I spied LSFG, aka Olivier, with said visor attached to his pack strap – what a star. We walk at a similar pace and have spent some time chatting in spanish, which I have enjoyed as his level is about the same as mine and it is easy to understand him because he has to think about what he is saying, which slows him down to my pace. 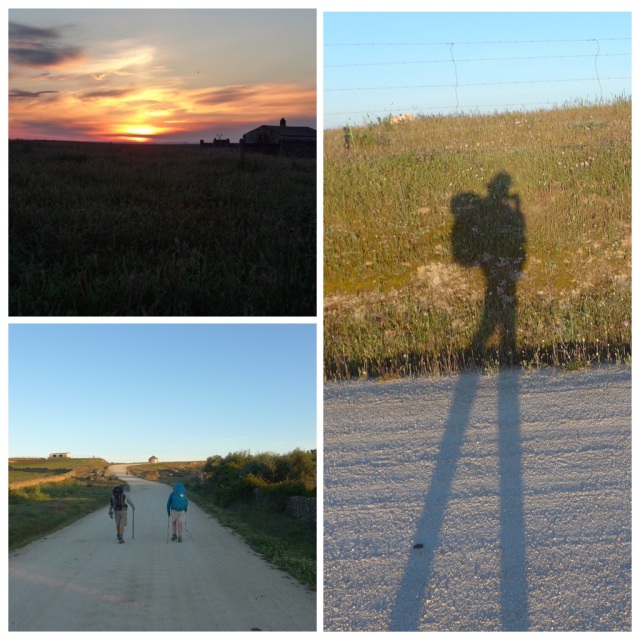 We walked together for quite a while today, on and off, along rather prettier flat sandy tracks with lots of cows who patiently posed for me. I stopped for a boots-off break after around 12 km and Olivier walked on. A huge reservoir came into sight – beautiful blue water. But a bridge is in the process of being constructed across the water (two in fact) and I had to endure a long diversion to by-pass the construction site. It is part of a new fast rail line ( although it looked more like a road to me)being built to connect Madrid with Extremadura and continue to the Portuguese border. Eventually I was led onto the shoulder of a road, not much traffic, but very fast moving. The first thing to pass me was a big lorry and I lost my hat for the second time today when the back-draught whipped it from my head. I quickly grabbed it before it disappeared out of reach. The vehicles on this road seemed to be mostly construction lorries and big shiny motorbikes a few at a time, which seemed to be using the road as a racing track, whizzing past at enormous speed and huge noise. I caught back up with Olivier just here and admired the new bridge works from the road bridge that we were travelling on. Apparently there is a town below the reservoir but all I could see were shoals of massive fish.

We eventually reached the Albergue where Olivier is stopping, along with all the rest of the pilgrims I have been seeing for the last few days. I called in for a top up of my water supplies and as the day was getting very hot, I soaked my long scarf in water and wrapped it around my neck. This is such s treat – it’s a wonderful way to keep the sun at bay and when It got even hotter, I put it over my head.

So I bade farewell to Olivier and Javier and continued on my way, as were a couple of German pilgrims who had been in my room last night. The track climbed high above the water and I got a different view of the new bridge in construction. The track was now very stoney and rocky and hard work to walk on. I slowed my pace right down. It is really hard walking on this type of track and it is necessary to watch almost every step – it would be so easy to turn my foot or trip – especially as the day wears on and I become tired. But luckily there were no mishaps and I trundled on taking my time on the uneven track, And now and then refreshing my scarf with more water.

The town of Cañaveral comes into sight from quite a distance but never seems to get any closer. I followed instructions on my app guide to ignore certain signs and carry straight on, but looking at my GPS route, I can see that I should have followed said signs to the town and saved myself quite a few km’s wandering about on the hillside. After following those app instructions I eventually came to a site where there is a big wooden notice board erected by the Ayuntamiento with a wooden arrow marker pointing to the left along a very narrow track. I followed this for a while but it didn’t feel right, so before I got too far, I returned to the notice board and this time noticed a very faded yellow arrow pointing to the right, which my instinct told me was correct. So I in turn followed this path for at least 500 metres, but it seemed to be taking me further away from the village. I decided to return to the board yet again, and this time I phoned the Albergue where I was due to stay and was told to take the direction I originally went to the left, and eventually there were some arrows. I finally reached the Albergue at around 5 pm. I had consumed more than three litres of water today and could easily have drunk more.

But the prize at the end of this hard slog was worth the effort. Quite the nicest (private) Albergue, charging 15€ and providing crisp sheets and duvet in spacious rooms of four beds – Of which two are occupied in my room. And the lovely hospitalera machine washed almost every item of my clothing and hung it out to dry for me. They also serve a three course menu with wine for 7€ – about time I had a decent meal. 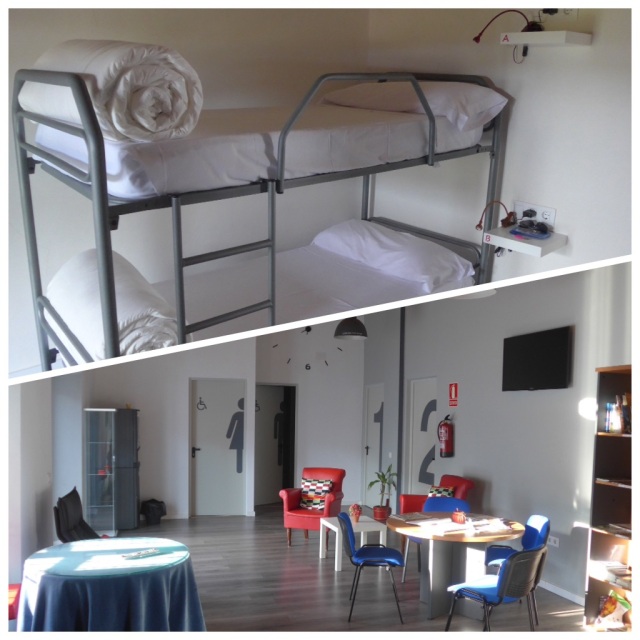 Although my distance walked is 38.5, about 1.5 of that involved returning for my hat and probably the same or more wandering about in the wilderness. The various guides state anything between 32 and 36, so I would take a guess at somewhere between 34-35 being correct.