Well, if yesterday started off chilly, today was bloody freezing and I have the photos to prove it! The hand socks were pulled on, the buff headband was applied over the visor (could be a new look, but unfortunately I didn’t get to see what a great style it was), and the rain jacket kept the fresh air off my chest. But once the sun lifted in the sky, the air warmed and all was well. The sky was a stunning deep shade of blue all day without a cloud to be seen, but a fresh light breeze kept conditions perfect. 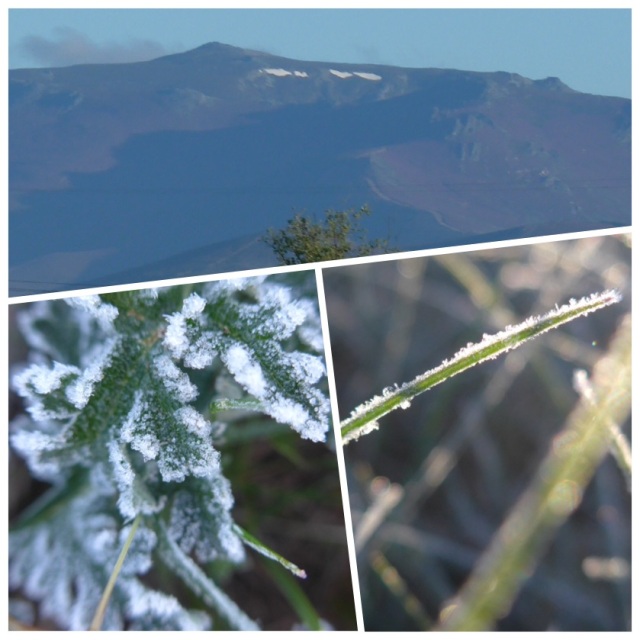 Today was another delight. Just how I like it. Lots of villages between start and finish and each one increasingly pretty and charming, with many stone buildings and an abundance of bright orange California poppies lining the village streets.

I stopped for a coffee at Mombuey and bought a new supply of tissues to receive the industrial waste that my nose has been producing for weeks. Once past this sizeable town I was on a path lined with brambles and in true Beatrix Potter style Peter Rabbit and all his friends came out to play, darting across the path and challenging me to catch them on camera. I did actually manage one shot, but by luck rather than judgement.

A couple of km’s further, much larger animals came out to play on the track and I managed to catch a shot of what I think was a deer, although I couldn’t be sure as it was some distance away and unfortunately the camera was on macro setting so it is very blurred, but it is certainly there. I was told yesterday that there are wolves in this area, that have been so successful in breeding that they are culled every year. Wouldn’t a wolf be a great addition to my portfolio? 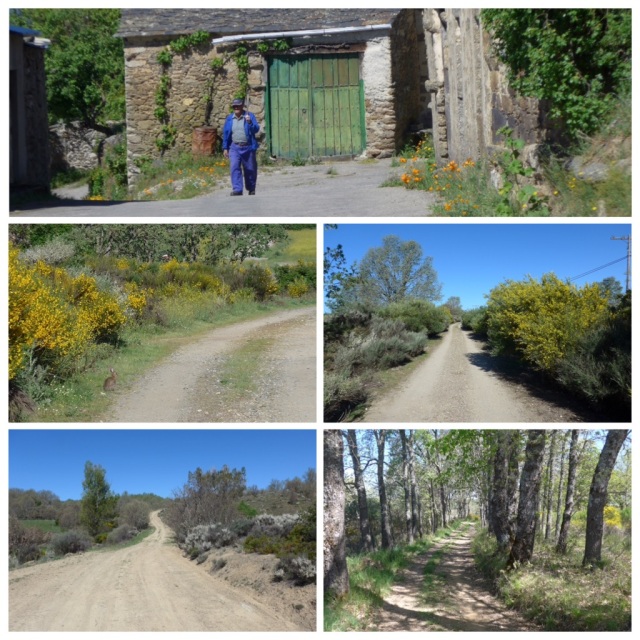 Butterflies were also out in force today, flitting around showing off their spectacular colours – such a variety – and all avoiding my attempts to catch them on camera.

The tracks were once again lined with yellow and white broom and the aroma was delicious. A couple of big hills made me puff a bit, but there are plenty more to come over the next few days. I am very glad that the great delights of this camino were at the beginning and the end, and the parts that were perhaps a bit boring were in the middle. I am looking forward to the last couple of weeks of this camino – entering Galicia in three days and reaching Santiago on the 26th. I will then walk to Finisterre and spend a rest day there and (if flights permit) return home on 1 June. Paul, with whom have been keeping pace for more than two weeks, isn’t sure he wants to do 30+ km days when we get to more mountainous country. I will be sad to lose his very easy company, but I really want to reach Santiago by the 26th so that I can meet up with George before setting off for the final few days towards the Atlantic Ocean.

Paul caught up with me about two thirds of the way and we arrived at our destination of Asturianos together, where we are staying in a rather unusual albergue, attached to the town’s polideportivo (sports centre). There are six beds in three bunks. Jesus and Mary had arrived before us and taken two lower beds and I took a top bunk in recognition of Paul’s great(er) age – there’s friendship for you. Then arrived the Korean/spanish couple (still haven’t learned their names) and the stragglers had to make do with mattresses on the floor, thus far Alke and Patrick and Jose Antonio. The albergue is some distance outside the town and has a bar attached, which seemed a bit strange at first, but it is well used by locals. The facilities are excellent and clean and the cost is 4€, and the surrounding grounds are beautiful.

I must tell you about the gastronomic delights of last night. After our tuna mousse appetiser, we were served cardo braised in cream and served with almonds. I first thought I was eating chunky celery, but found that cardo translates as thistle. Apparently though, it is neither thistle nor celery, but a very large plant that grows to around a metre and a half and is traditionally served in Northern Spain for Christmas lunch. It was delicious. Then followed a scrumptious wild mushroom risotto. The third course for the vegetarians was cod with vegetables cooked in foil, and for us carnivores pork loin with lots of garlic and a crunchy apple salad. We finished with tiramisu and icecream. The incredible 10€ price included as much wine as desired, a liquor and coffee to finish. I am sure this will be the best food eaten on any menu del dia at that price. And the fabulous chef/owner made me a breakfast bocadillo with the meat I couldn’t eat. (All that garlic was a good way to start the day – lucky I was walking alone!) 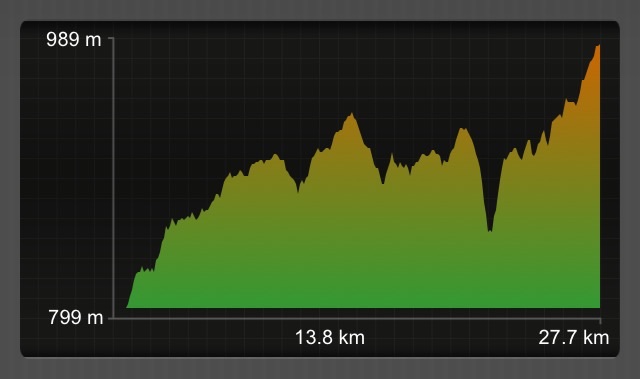