…..and then there was one

Well, that very odd feeling of being alone in a bustling city is here again. Very strange after being in the company of new but much appreciated friends for so long.

Yesterday morning (Saturday) Olivier and I stowed our backpacks in the hold and clambered onto the coach from Finisterre to Santiago. He stayed in a small hotel immediately off the Praza de Obradoiro whilst I checked into the albergue ‘The Last Stamp’ once again.

In my excitement about the last day’s walk I forgot to mention that I came across both Swiss Peter and the German ‘chuckle brothers’ on my way to the coast. When I thnk about all those people that stayed in the albergue the previous night and that I only saw a couple of them en route, and yet I saw these guys that I had spent time with a week or so before – it’s quite a coincidence. And then this morning, just after I had met with Olivier for a spot of breakfast I bumped straight into my favourite Austrian woman and her husband who had walked to Muxia and returned to Santiago on this morning’s bus. So now I have seen almost everyone with whom I spent camino moments, except, sadly Aase, but she sent me a message today and I was very pleased to see that. 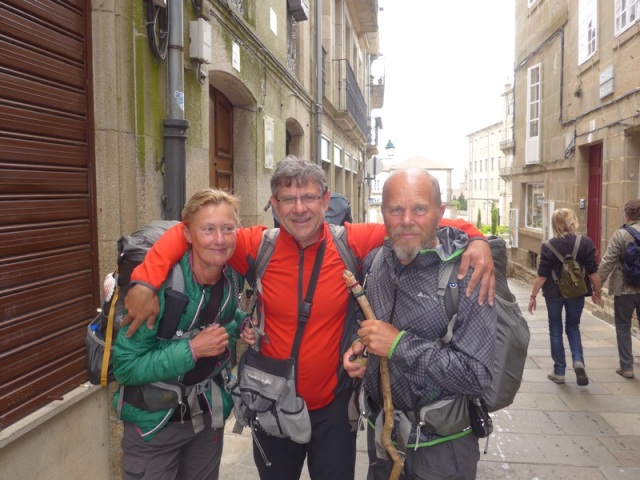 The chocolate and churros I had planned for my breakfast weren’t forthcoming because my favourite cafe was closed, so we wandered round to the area by the food market and found a nice bar for a coffee and cola cao, and then we stayed for a glass of wine. Olivier then decided he would like to try another type of wine and then another. At Bar Pepe a plateful of tapas is served with each drink and I was soon feeling full and not a little lightheaded – before 1pm. And then it was time to walk my friend to the bus stop and bid him farewell. Of all the people I have met on this camino, Olivier was definitely the hardest to communicate with, having to converse in Spanish could be very tiring, occasionally frustrating, and often hilarious.  He has plans to visit Andalucia with a friend in August and I think I may have tempted him to pay me a visit by telling him about Cómpeta’s annual wine fiesta ‘La Noche del Vino’. If free wine, food and music can’t tempt and French man, I don’t know what can.

As I returned from the bus stop I came upon a drumming group numbering not far off 100 drummers. I love the sound of drums and stood around watching them for a very long time. The charismatic conductor was jumping all over the place and it was impossible not to be mesmerised, even for the very young. The group is called Batebatuke – take a look at the link – I’m sure you’ll enjoy it.

I then met up with Janet, an Australian woman who has been walking in Europe for the best part of a year. We are members of the same pilgrim internet forum. She is involved with the ‘amigos’ in Australia and is giving a speech at an international amigos conference taking place next week.

Then it was time for a siesta. All the time I was walking, I don’t remember needing a siesta even once, but now I have stopped I am exhausted. It is normal and I remember feeling the same last year. But now I realise that poor Olivier was feeling just like this when I arrived in Finisterre full of energy and dragged him up to the lighthouse. No wonder he lagged behind. I should feel guilty, but I don’t at all.

So now all my friends have departed and I’m not really interested in trying to make any new ones. Luckily I am sharing my cubicle for four with a mother and daughter and another woman, who all seem very quiet. And they are here for another night, as I am, so hopefully I will be able to catch up on my sleep before flying home on Tuesday.

I had originally planned to take a bus up to the north coast for a couple of days, but the weather has turned very dull and I don’t really fancy a big unfamiliar city. I feel quite comfortable here amongst the ‘circus’ of excited arriving pilgrims and tourist groups. But I shall be very, very glad to return home.

Quick update – I went out for some fresh air this evening and came across the delightful Christian, a young German guy who I have met a few times and then we saw Dutch Marga who I haven’t seen for a couple of weeks. It was lovely to see them both and when Christian went off to do some sketching from the park, Marga and I went for drink. This camino keeps on keeping on.

Please stick around for a few more camino related posts over the next few weeks. And thank you so much for all the encouraging and humorous comments, and for the great support I have received from so many people that I have never met but who feel like true friends.

31 Responses to …..and then there was one