A jaunt to Jerez

Apologies that there has been a bit of a hiatus between my account of the trip that I took with my daughter Ella to Seville (at the end of November) and the continuation of this trip to Jerez – all that Christmasy stuff got in the way. Here, now are some lovely photos and a few words about the final two days of our Andalusian meander (around Málaga), saunter (through Sevilla) and jaunt (to Jerez)…

After a busy weekend in Seville, Monday saw us boarding the 10:30 train for the hour+ journey to Jerez de la Frontera and then found our way to the Hotel Doña Blanca (3*, lovely spacious room for 34 euros per night), which was very centrally located only a few minutes’ walk from the main square Plaza Arenal. 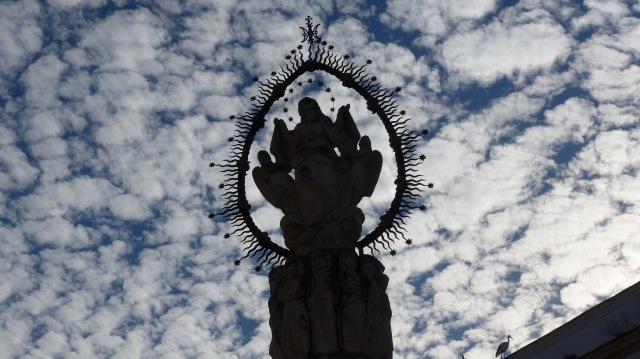 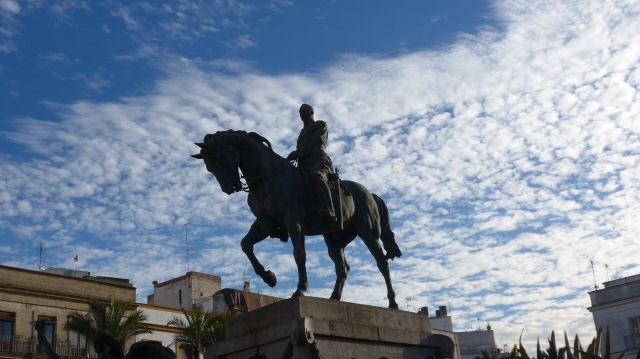 We made a quick turn-around and were soon out and about, looking around the food market, stopping for a drink and tapas for lunch and then popping into the tourist information office to get our bearings. 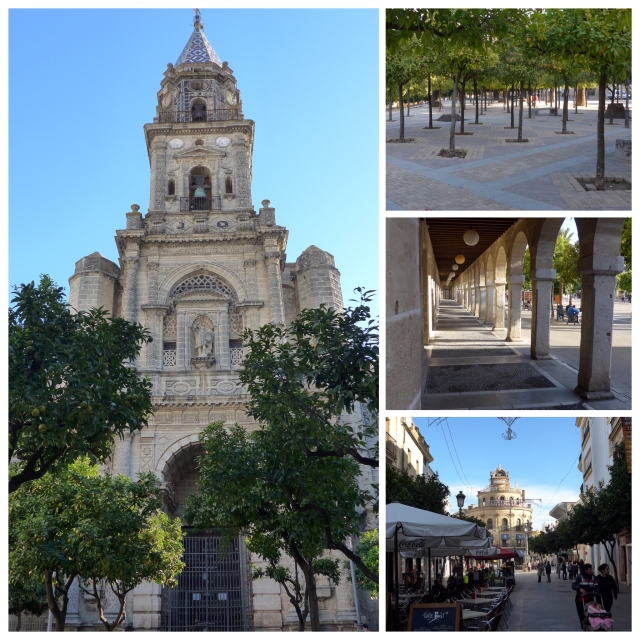 We were both keen to visit one of the famous sherry bodegas and the nearest was the Tio Pepe Bodega. The tour didn’t take place until later in the afternoon, so in the meantime we wandered to the Alcazar (originating from the 11th century when it was a Moorish fortress). We were delighted to discover that on Mondays entry was free and surprised to find that not many people were taking advantage of this offer and that we had the place practically to ourselves. I loved it. So peaceful and charming with courtyards and cloistered patios both intimate and grand, a lovely garden, towering palm trees, turrets to climb, bath houses to admire, a fascinating mooch around the former palace and the beautifully preserved pharmacy. There is also a camera obscura, but unfortunately it was not open, I guess because it was a ‘free’ day. But there were so many vantage points to look out over the city rooftops and the cathedral that it wasn’t too disappointing. We spent a good couple of hours just soaking up the atmosphere on a beautifully sunny afternoon. 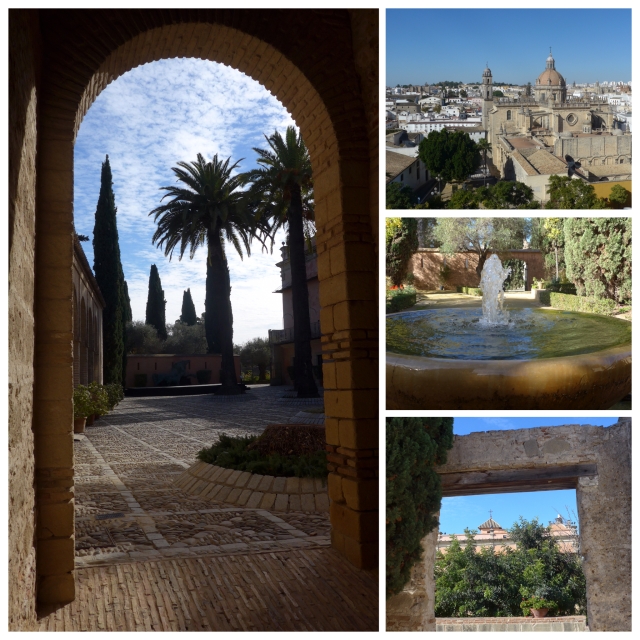 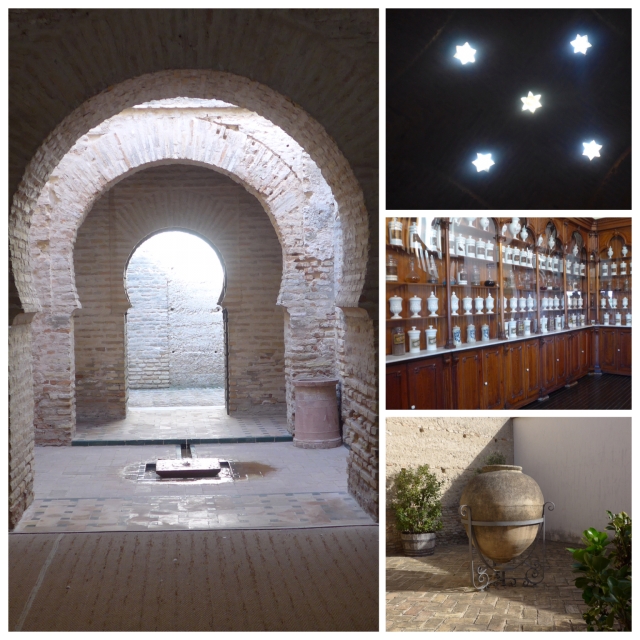 On leaving, we strolled past the very impressive cathedral and wandered around the narrow back streets and small plazas, stopping for another drink and tapa before arriving at the Tio Pepe Bodega for our 5pm sherry and brandy tour. 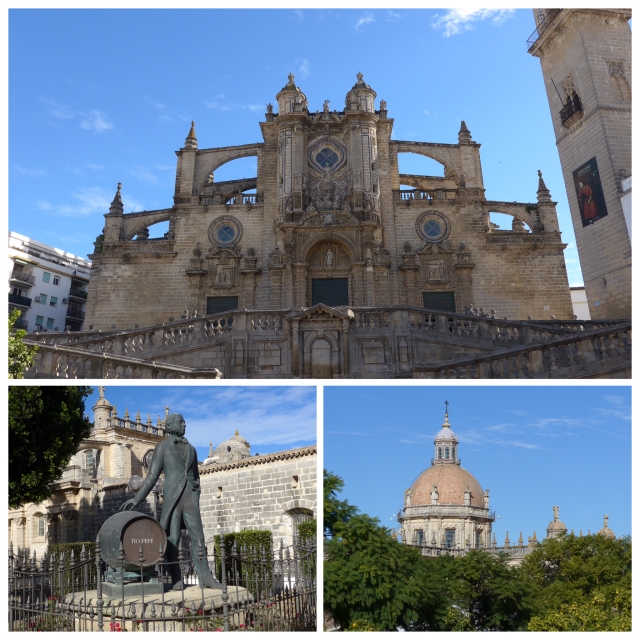 There were various tour options – and we chose the guided tour with tastings of two sherries at 13 euros – other potions included four tastings and tapas. There were about eight of us for the tour and I was a bit miffed that we were invited to board a silly train to drive us around the extensive site, and we could only view what promised to be really interesting cellars through windows as we passed by. But we were eventually allowed to disembark and our knowledgeable guide led us into a building which housed antique distillation equipment and ancient barrels and she explained in Spanish and English about the history of the bodega. 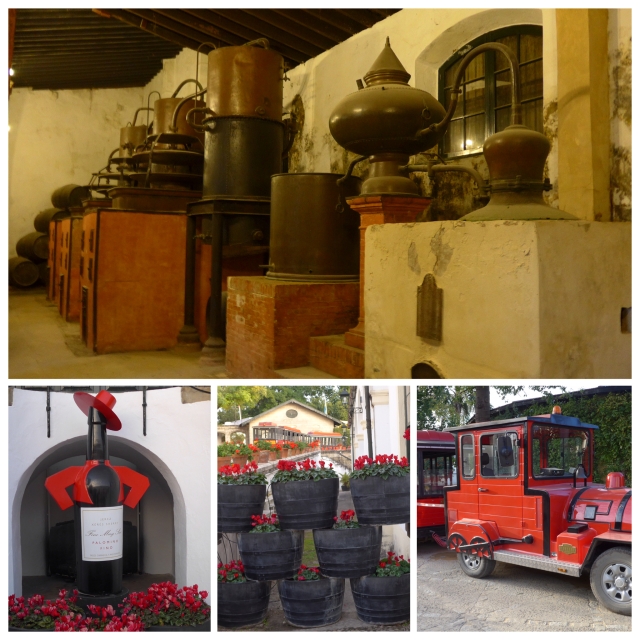 We were then taken to another cellar where there were viewing rooms in which we were shown an interesting film about the founder and the origins of the sherry business, and after that the train was dismissed and we were able to walk around this fascinating and immaculately maintained bodega. 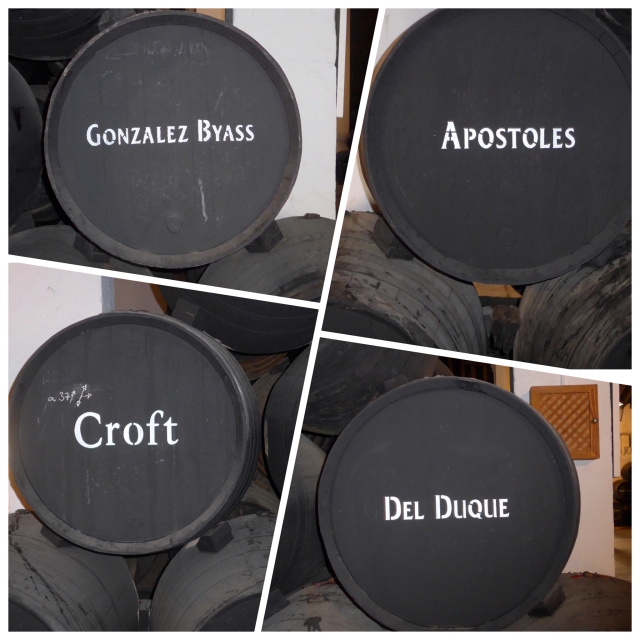 Some of the well- known brands from the Tio Pepe Bodega 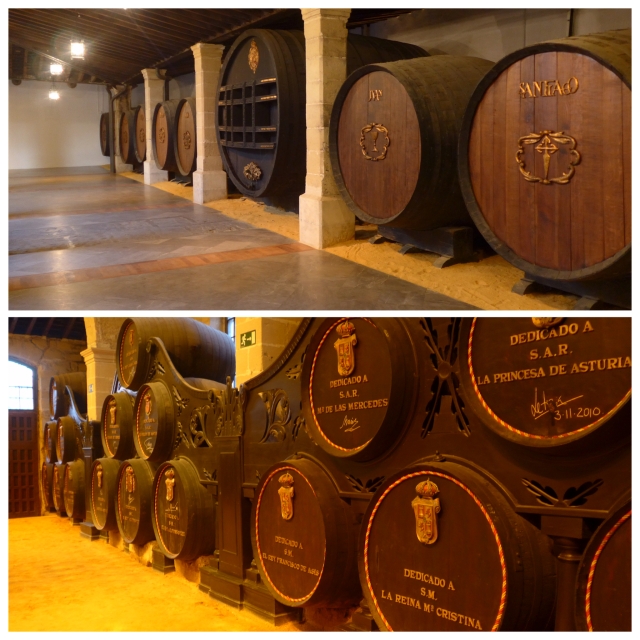 Barrels dedicated to Jesus and his apostles, and also to the Spanish Royal family 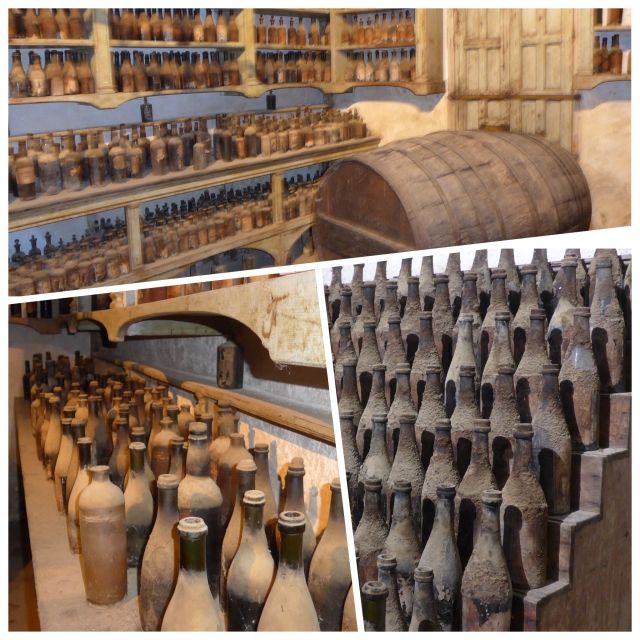 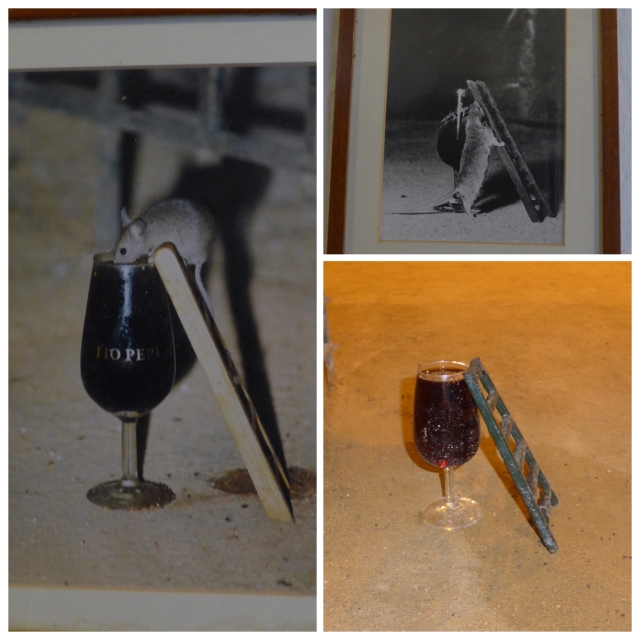 I really loved this visit in such interesting and beautiful surroundings, and it was topped off with a generous taste of both dry and sweet sherry. By the time we emerged from the bar, dusk had fallen and we were treated to a sight of the castle and cathedral floodlit against the inky sky – quite stunning.

A fitting conclusion to a fabulous tour 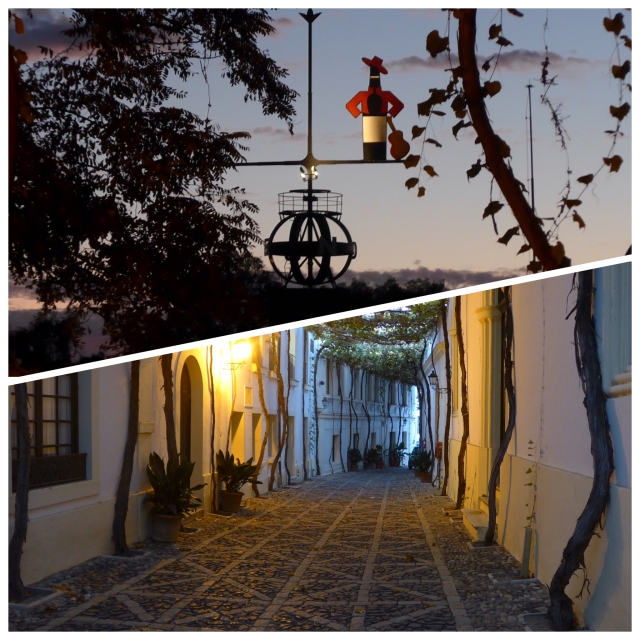 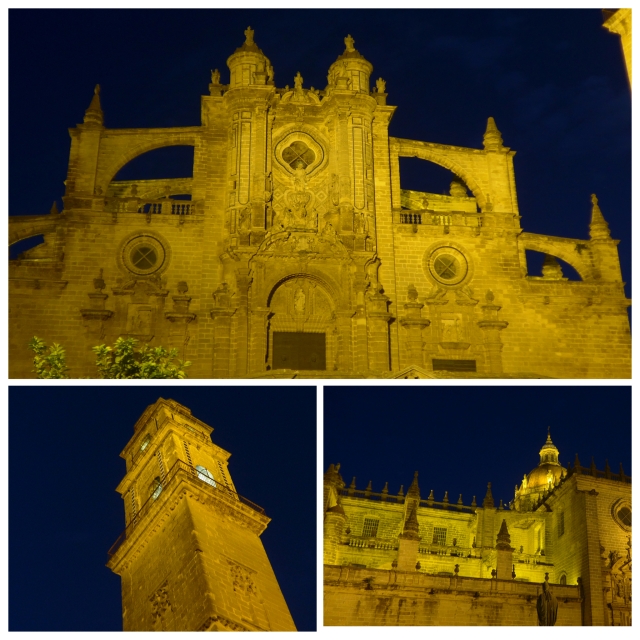 The remainder of our stay in Jerez consisted of wandering around, eating and drinking and a visit the following day to the Real Escuela Andaluza del Arte Ecuestre (the Royal Andalusian School of Equestrian Art). Disappointingly I wasn’t allowed to take any photographs during the performance of these beautiful animals. We booked on line and paid considerably less than the advertised price.

By the end of our second day in Jerez we were running out of steam so didn’t look for anything else touristy to do, but we did enjoy some of the best food I have tasted for a long time – all from tapas menus, and it was the perfect way to wind-down after a few hectic days.

Wednesday morning saw us catching the train back to Seville and then returning to Malaga train station where Ella and I went our separate ways – Ella to the airport to return to the UK and I caught the bus back to Cómpeta.

It was a fabulous way to spend some quality time with my daughter and to enjoy three beautiful Andalusian cities in just five days.

Trepidatious Traveller - camino blog is about preparing for and walking the Camino de Santiago. Many future pilgrims have found the blog useful and inspiring, and many who have no plans to walk the camino have simply enjoyed the dialogue http://www.magwood.me
View all posts by magwood →
This entry was posted in A view of life, Expats in andalucia and tagged Jerez de la Frontera, Málaga, Real Escuela Andaluza del Arte Ecuestre, Royal Andalusian School of Equestrian Art, Sevilla, Seville, Tio Pepe. Bookmark the permalink.

15 Responses to A jaunt to Jerez