Today started well with a path alongside a river and some really charming tiny villages. Followed by a long stretch through woodland with a variety of path surfaces. Stopped at around 8 km at the beautiful and peaceful site of the Monasterio de Zenarruza, with a very pretty cloister. I took a look inside the chapel and was about to leave when four monks arrived at the altar and started chanting. It was a very special moment and not the only one I experienced today.

Most of the walk today was through pine forrest and the footing was often treacherous. Deep muddy puddles stretching over the entire track and as soon as you had negotiated one, another was there waiting to bog you down. I spent some time walking with German Carsten, and bumped into Mexican Alan and American Niki from time to time (but only when they had stopped for a rest – they are so much faster than me).

At one point in the woods I heard and then spied a generator and signs of works being undertaken – lots of tape marking an alternative route which was even more steep than the original one. Unfortunately I took a bit of a fall and somehow managed to be flipped over and land on my front. I have a bruised forearm which took the brunt, and a tender thigh, but all in all I got away quite likely. A little further on, I could see what work was being carried out – wooden steps were being erected along the very steep path, which will make life a little easier for future pilgrims. There were several sections that had been completed, but these were still cordoned off. After obediently not walking on the first section, I decided life and limb were more important than obeying rules and ducked under the tape (not easy with a backpack) and walked down the last set of steps. All along today’s walk I could see signs of the French guy who is riding the trail. Some of these tracks must have been so tricky to manoeuvre a horse down. 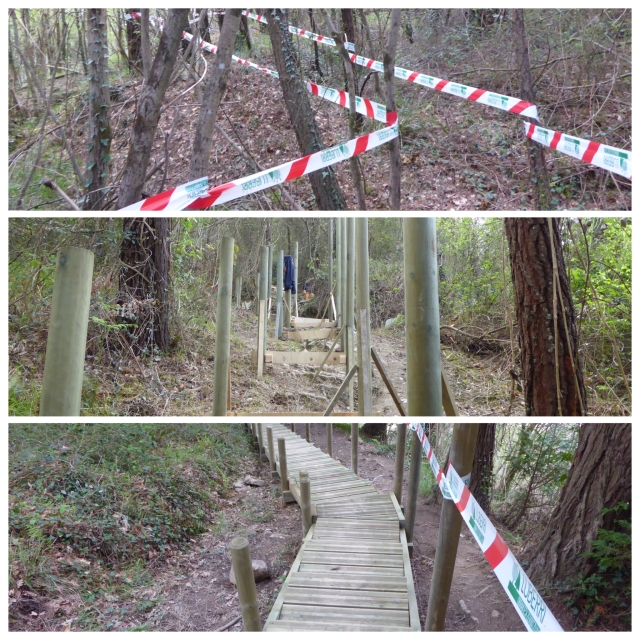 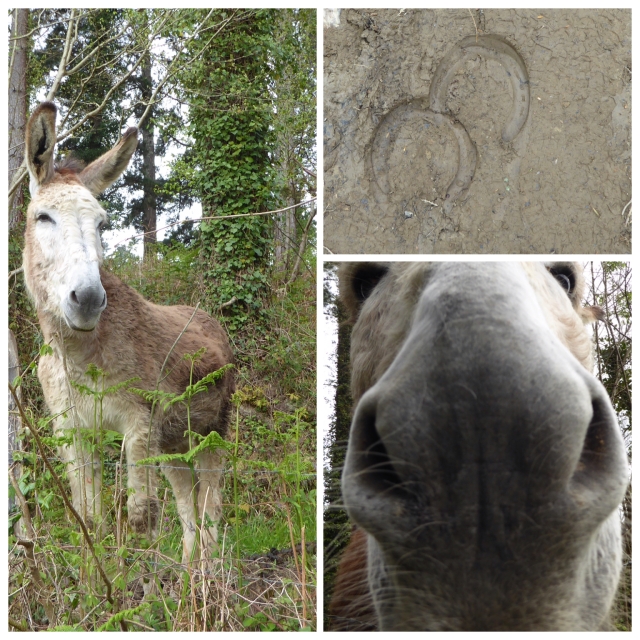 I felt a bit of a hotspot on my right heel and when I had the opportunity to sit down somewhere that was not boggy mud I took a look and applied some tape and a bit of hiker’s wool.

Carsten caught up with me again and just as we were approaching Guernica we spied our friends in a bar chatting to a very jovial Irish man (aren’t they all?).

Guernica is the suggested stopping place on this stage and was around 26 km. I had decided to walk on to the next accommodation as I wanted a shorter walk tomorrow into Bilbao. I called into the tourist information office in the city centre to get directions to the copy of Picasso’s artwork of the same name as the city.

From Wikipedia – Guernica is a mural-sized oil painting on canvas by Spanish artist Pablo Picasso completed by June 1937. The painting, which uses a palette of gray, black, and white, is regarded by many art critics as one of the most moving and powerful anti-war paintings in history. Standing at 3.49 metres (11 ft 5 in) tall and 7.76 metres (25 ft 6 in) wide, the large mural shows the suffering of people, animals, and buildings wrenched by violence and chaos.

The painting is believed to be a response to the bombing of Guernica, a Basque Country village in northern Spain, by German and Italian warplanes at the request of the Spanish Nationalists. Upon completion, Guernica was displayed around the world in a brief tour, becoming famous and widely acclaimed, and believed to have helped bring worldwide attention to the Spanish Civil War.

I was directed by the tourist lady across the central plaza where the town hall is situated. As I reached the far side of the square I was taken aback by the commencement of an extremely loud siren, wailing up and down. I saw very close by a guy operating the sound equipment and I mimed to him ‘what’s going on?’ He gestured back the impression of something falling from the sky, and I realised that it was something to do with the bombing of the city. The time was exactly 15:45. The siren continued for some time, accompanied by the chiming of bells from the church and I stood still and contemplated the occasion. It was literally hair-raising and very emotional. When the siren eventually tailed off into silence I went over to the guy and asked if today was an anniversary and he told me it was 79 years to the minute that the city was bombed. It is reported that at the time of the attack the city had a population of around 7,000 and 1,654 people were killed.

After the event I walked the few metres to the mural with which I was very familiar as an ex-colleague of mine had a poster of the artwork in her office. I had never realised the depth of meaning of the work. I felt truly humbled to be present at such a somber occasion.

On the way out of the city I could tell that my hotspot was still ‘hot’ and stopped to take a look., I discovered the beginning of a large blister on my heel which I had more or less missed with the hikers’ wool. I applied an ‘Engo’ patch to my boot, and immediately felt the relief when there was no longer any friction. If you don’t know what an Engo patch is, look it up. Expensive but effective.

The rest of the walk to Eskerika seemed to go on forever with more persistent inclines through woods, and eventually on the road for some time. We finally made it to the private albergue at 19:00 and were welcomed by our host. This is a lovely rural location with 20 beds, two bathrooms, outdoor kitchen, washer/dryer/ and peaceful garden. Pilgrims can order a meal or buy food to cook themselves. Alan, Niki, a Japanese girl and I are the only residents for the night and we pooled all our supplies and bought a few more items and a wonderful meal was made, and all plates were left clean at the end of the evening. I took no part in the preparation, so did the washing up. The cost for a bed here is 14 euros and breakfast is available for 2 euros more. 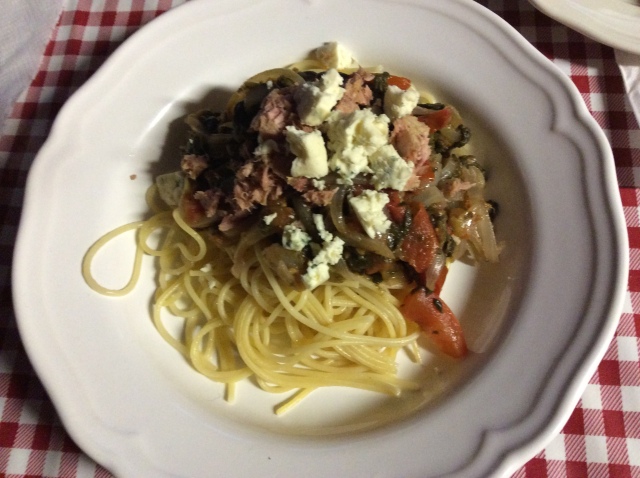 I was totally knackered on arrival, but really satisfied that I put in a long distance. A very special camino day.