Ah, the joys of sharing a room with young women (once they stopped chattering and settled down). Not a sound, no creaking beds or grunting or getting up in the night for the bathroom – just total silence. Bliss!

I forgot to mention yesterday that I had no great after-effects from my fall. My arm and thigh are a little sore if I prod them – but there is an easy solution to that. And the blister receded – those Engo patches certainly do a good job.

I enjoyed my walk through and out of the city this morning, I popped back to the Plaza Nueva to appreciate its ambience one more time and then headed towards the Rio Nervión. There are various options by which to depart the city and I chose to walk alongside the river with the water to my left. This took me on the opposite bank from the Guggenheim which I predicted would give me better views across the water. I wasn’t disappointed. It’s a magnificent piece of architecture and the reflections in the water were lovely. 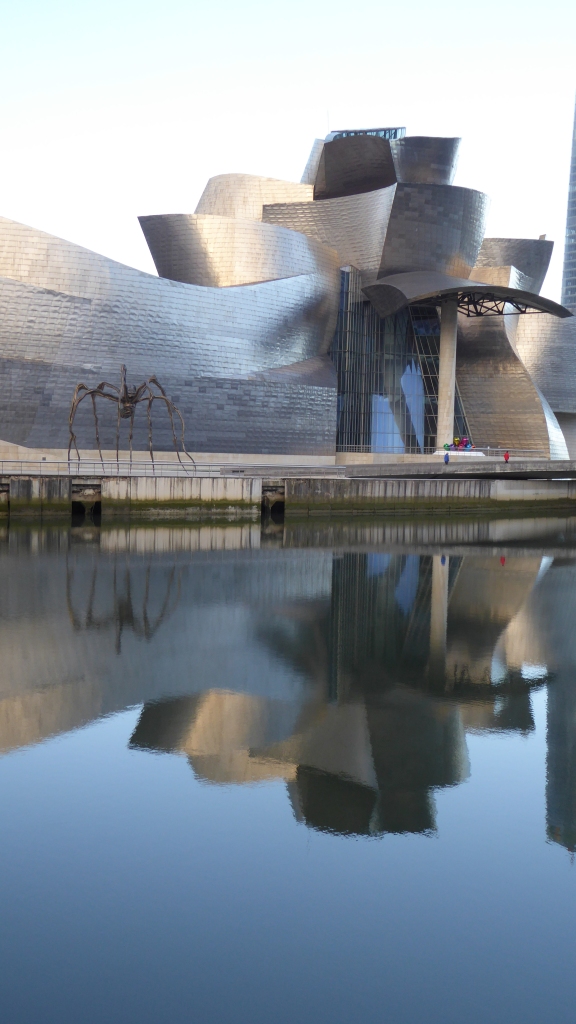 There isn’t a great deal to commend the walk after this point, it becomes more and more industrial and less and less attractive. After 14 km I reached the amazing Vizcaya hanging transporter bridge that crosses the river to Portugalete. Built in 1893 and designed by Alberto Palacio, one of Gustave Eiffel’s disciples, to provide access between the towns of Getxo and Portugalete without disrupting the shipping activities of the Port of Bilbao. Since completion it has only been out of action for four years – during the Spanish Civil War. During the day it runs every eight minutes, and is able to transport 6 cars and dozens of pedestrians. During the night it operates every hour. It cost me 40 centimos to take the trip and was a great experince. It is also possible to take an elevator 50 metres up to the top of the bridge for magnificent views of the port and Abra bay, and to cross by foot. 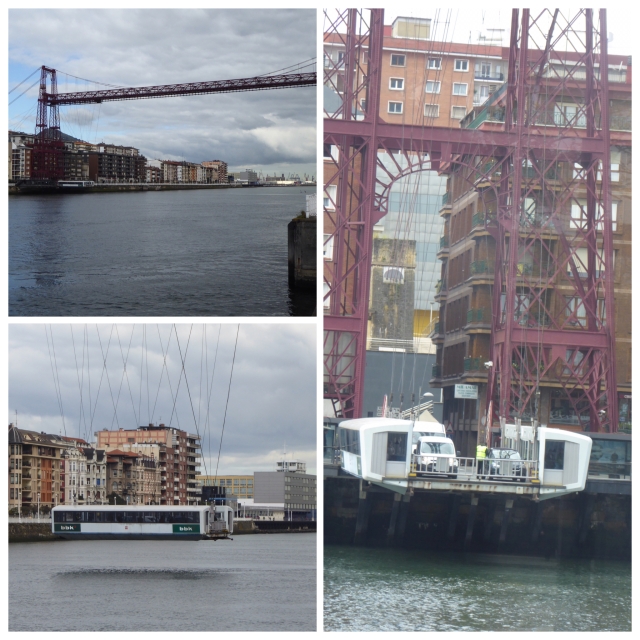 I stopped off in Portugalete to buy some bread and a pastry. If you are taking is route, you might like to find a bar here for your last coffee and comfort break before the destination of Pobeña. I thank my stars daily on the camino that I rarely need to make such advanced planning as I seem to have been blessed with an iron-cast bladder. I have only ever been caught out a couple of times, last year on the Mozarabe when there were extremely long stages without benefit of any such facilities. I shall enjoy this freedom whilst I have it, because I expect advancing years will put an end to this good fortune.

The people of Portugalete are rather spoiled – they have been provided with a series of escalators running up a steep hill into the town. You’ll be pleased to learn that I remained pure in my actions and propelled myself up the hill with no mechanical help. The trail eventually leads to a bridge over a complicated motorway intersection via a cycling/walking track. There is another option at this point to divert via the town of Ortuella or stay on the cycle track, which I chose to do. And there I remained virtually all the way into Pobeña. From Bilbao a total of 26 kms walking on paved surface, with only one glimpse of the ocean on the way. The track was well used by both cyclists and walkers and I received many ‘buen caminos’ from both groups. I also had a lovely elderly lady stop me earlier in the day. She asked if I was walking to Santiago, and beamed when I told her I was. She grabbed my hand and squeezed it and wished me Buen Camino. I was very touched (emotionally as well as physically!)

The last km of the walk was glorious, on a sandy track that lead to a huge swathe of sandy beach, and the last stretch was via a boardwalk on the beach. The small town of Pobeña is quite pretty and has an albergue, but this time my guide book was correct, and it was closed until 1 May. I didn’t want to walk further (17.5 kms to Castro-Urdiales) so my only option was to stay at a tourist accommodation above the restaurant Mugarri. A bit of a budget-buster at 35 euros, but I actually have a small apartment with kitchen – even washing machine. An Austrian woman arrived shortly after me and was allocated a small room for the same money. I had already asked about the cost to share a room if someone else came along, but it was only a saving of 5 euros and I think both the Austrian (who I hadn’t seen previously as she only started her Camino from Bilbao this morning) and I wouldn’t have wanted to share with each other. 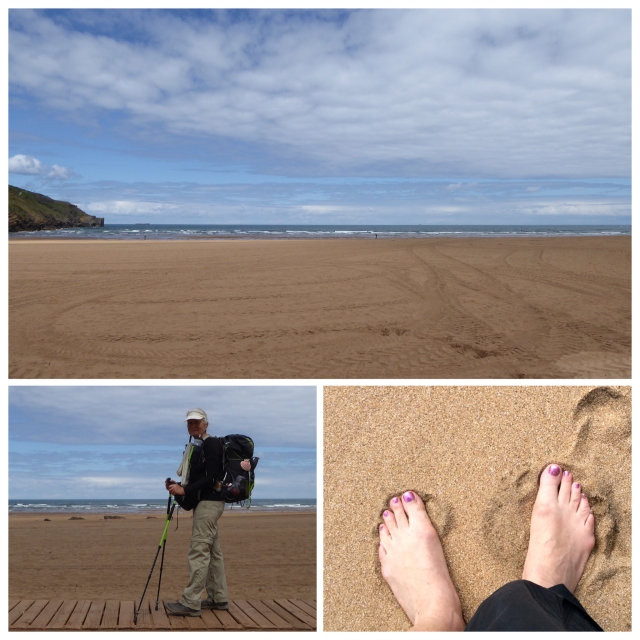 So I have the luxury of spreading my stuff all over the place and taking a hot drink whenever I fancy. I have written this sitting on the beach where I found a spot behind a beak water, out of the cool wind. However the wind has just crept around to find me so I shall finish this post in the warmth, maybe with a glass of wine to hand.