Today’s Camino started under another grey sky but with the promise that the sun might break through. But the promise wasn’t kept, other than a few very brief moments. But it made for good walking conditions apart from the couple of occasions when a brisk wind picked up.

After a couple of km’s I became rather uncomfortable when I thought I was being followed by a non-pilgrim man. He had changed his direction to follow me and as soon as I became aware of this I stopped walking so that he had to pass me. I would rather have someone I wasn’t sure about in front of me than behind. The following walk entailed a very remote area and there were no other pilgrims in sight. I was constantly on the look-out for this guy both in front and behind me, but I could not see him anywhere, even though he was wearing a red jacket and would easily be seen. The track itself was very odd and I wasn’t really sure I was going the right way, but was very glad to eventually see some indication by way of a shell tile. I continued to be vigilant for several more km’s until I finally reached a small village and decided to take one more look behind me before allowing myself to relax. I turned around, and there he was 20 metres behind me. I hurried into the village and darted up a side street and hid around a corner in a position where I could see when he passed, which he did after a few minutes. I waited a while longer so that he would be well in front of me before setting off again, and when I emerged onto the street he was coming back towards me in the opposite direction. He then took one route and I took another and I soon reached a larger town where there was a cafe. I went in and ordered a drink whilst watching the window and saw him pass. I stayed in the cafe for a long time to put some distance between us. It was a very odd route for a non-pilgrim to be walking.

Soon after I set off again I met up with a Belgian guy and happily walked with him for the rest of the journey. As we passed through the next quite large town I passed the guy in the red jacket, sitting on the side-walk begging. And I wondered if he had intended to rob me. I couldn’t possibly know what his intention was, but his behaviour was very suspicious. I was very glad of the company of Luc and was able to relax for the rest of the walk.

There have been other incidents that I have heard about, relating to local men exposing themselves. One guy who flashed my delightful German friend and then did it again because he hadn’t been as erect as he had wished the first time. And she had spoken to an older woman who had also been flashed by another pervert on a separate occasion. ‘Flashed’ is too tame a word to describe these incidents that are intended to intimidate lone women. I do not want to spread alarm, but wish to tell it as it is. Lone women need to be aware of their surroundings without feeling intimidated or victimised. Just be aware. Take avoiding action if possible. Wait for someone else to turn up if you are unsure of a situation. Walk tall and be strong and do not allow yourself to be a victim.

Moving on…the rain kept off, and we finally reached the albergue at around 15:00. It is newly built, with eighteen beds, separate facilities with shower and two loos in each. Very adequate, 5 euros. I just claimed a bed, registered and wandered straight off into the town to find a bar to send yesterday’s post. I was delighted to meet German Christina and share her lunch table and talk and talk. I have absolutely fallen for this charming woman – an absolute breath of fresh air.

When I left the bar I had no idea of the way to get back to the albergue (nothing to do with the two glasses of wine I had drunk) and had to call into a shop to ask directions. It was by now steadily drizzling and the weather progressed to a downpour. Good to get it done once the walking is over.

I took very few photos today, firstly due to my anxiety and later because nothing much inspired me. But I am particularly fond of the feline photo, especially because the Siamese looking moggy on the right is very similar to my Sheba. 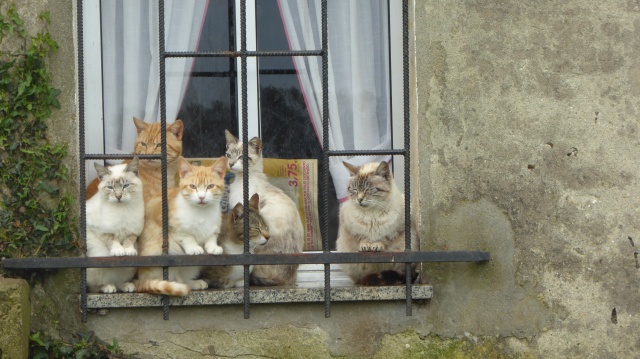 I have now walked four 30+km stages in a row and am looking forward to a shorter day tomorrow into Ribadeo, my last stage of the Camino del Norte. The weather is forecast to be increasingly brighter over the next few days, so my side trip, which was always rather weather dependant, is looking likely to happen. My boundaries will well and truly pushed over the next week.

There is a nice bunch of pilgrims staying here tonight, the Brits and Slovakian girl, Danish Hannah, my new Belgian friend Luc and quite a few Spanish. No French as far as I am aware. Maybe twenty two of us thus far.