Hanging out in Santiago

It was great to meet up with George last evening. For those of you who don’t know, George and I walked the first part of the Camino Mozárabe together last year. We met for the first time at the church of Santiago in Malaga and continued to spend eighteen days in eachother’s company, seeing very briefly only three other pilgrims in all that time. On day eighteen we reached Mérida where the Mozárabe meets with the Via de la Plata, and George and I went our separate ways as he was on a slightly shorter timescale than me. This year George has walked up from Cádiz joining the VdlP at Seville. His grandson Thomas came to meet him at Santiago and they walked to and from Finisterre together. It was a delight to meet Thomas who is an absolute credit to his family – if only all young people were so polite and engaging.

I returned to the albergue at around 22:30 and was about to get ready for bed when the thought occurred that I had never really wandered around the streets of Santiago after dark, so back out I went, to take a few night shots. I worked my way around to the Praza do Obradoiro and was drawn to some lively music being played under the arches of the ayuntamiento building opposite the cathedral. There was a troupe of twelve musicians playing a variety of instruments and singing, to the delight of a small crowd. I stayed, listened and watched for the best part of an hour until they stopped – they were such fun and very professional. I was making my way back once again to my accommodation when I noticed through the window of a bar more musicians, who looked as though they might be playing my type of music – four guys with two guitars, a violin and a flute. The music sounded Irish but was probably Galician – whatever it was, I loved it and stayed there for another forty minutes or so, and treated myself to a cd before leaving. I have to say, I felt like a dirty stop-out when I crept into my bed in the wee small hours. But I had enjoyed an excellent evening of entertainment. 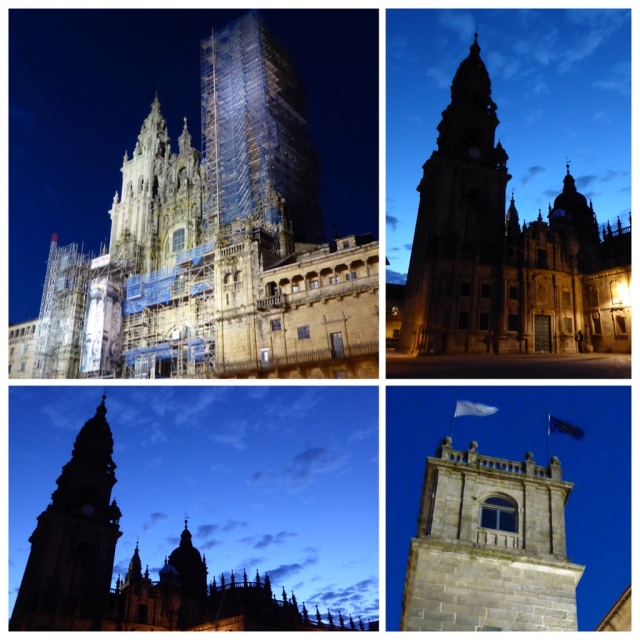 I spent this morning mooching around. First I visited the pilgrims’ office again to collect my Compostela, but even at 08:00 there was a huge queue – once again I didn’t wait. I would like to add my name to the list of pilgrims having walked this month, but am not too bothered about receiving a certificate. I already have quite a collection that I never look at and I have the more important credencial as my momento.

There followed a visit to the food market, and the post office to send my walking poles and penknife home. Then I went in search of the ‘Pilgrim House’, a welcome centre that offers backpack storage, laundry facility, wifi and printing. Situated at Rúa Nova 19, tel 981 585 788, open 11:00 to 20:00, but closed Wednesday and Sunday. There is a reading library, comfortable lounging area and a patio garden. It is a place to meet with others and share experiences, or just quietly reflect on your Camino. You will receive a warm welcome from very kind people. Look them up on line at pilgrimhousesantiago.com.

Nate and Faith who run the Pilgrim House, and their tribute to Denise Thiem, a pilgrim who was murdered on the Camino last year.

I then trotted across to the office of Ivar who runs one of the Camino forums. I’m not sure if this was a good idea as I think he was busy, but he graciously spared me a few minutes to touch base.

Then it was time for a very important mission. To find a peluquería where I could have my hair washed and tamed, which was so very nice after five weeks of unremitting frizz.

Back at the cathedral, I entered via the holy door, which is only opened during holy years. I don’t think I qualify for my sins to be forgiven as I am not a Catholic, but it couldn’t do any harm (I hope).

The musician in the black mask was playing again and of course I had to stop in the square for a drink. When he finished playing I complimented him on his fabulous music, by which time he had unmasked himself. I asked ‘why the mask’ and he said it was by way of his tribute to the musicians of New Orleans. he told me he is from Uruguay and has been playing in this spot for seventeen years. I bought a cd, which was rather expensive at 15 euros, and a difficult decision to make because there were several to choose from. He then very kindly gave me a second cd free of charge – I think he was in celebratory mood because he was due to fly to Ibiza later in the day to visit his sons. I was obviously in the right place at the right time.

The barman told me that he had to clear the tables and chairs from the square as they were closing, but I could move to a table under the arches. That was a good move as, soon after, the heavens opened for the promised downpour and I was comfortably seated with a glass of wine and a bowl of crisps whilst all around made a dash to get out of the rain and wait until it subsided. I fear my de-frizz will be very short-lived.

The above was written yesterday (Friday). It’s now early Saturday morning and I will be on my way home in a few hours. But I just want to share with you a few words and photos from my last evening in Santiago. I was delighted to have been in touch with some pilgrims that I walked alongside from time to time during the first days of this Camino. Alan from Mexico was at the albergue in Irún on the very first evening. I met American Niki walking out of San Sebastián on day 2, and Carsten from Germany a day or two later. We had arranged to meet in front of the cathedral at 19:00. Niki was first to arrive, looking as beautiful as ever, just like a breath of fresh air. And whilst we were chatting someone else walked over. I couldn’t have been more surprised to see Peter standing there, Dutch Peter with whom I had walked the first week of my first Camino in 2013. This was the best surprise I could have received at the end of my journey. Peter and I have remained in touch via Facebook and I knew he had been walking a few days with his son. I couldn’t believe my eyes at seeing such a dear and familiar face. We caught up with eachother’s family news for a while before he had to leave for the airport.

Then Alan and Carsten arrived and we were joined by Dutch Andre, who I had met briefly during my time walking with Gunter. We enjoyed an excellent meal at Casa Manolo (where I ate with George the night before – fabulous value menu with mounds of quality food for 9.50 euros, including water but not wine – highly recommended). We then regrouped at a bar specialising in strong beer – Niki and Carsten being aficionados of the brew. I bravely tried a couple before resorting to my favourite Alboriño. By midnight Andre had already left and it was my turn to leave the young ones to their last night. Thanks you guys for including me in such a fabulous evening – it made my last day very special.

As you can imagine, there were lots of smiley, huggy photos taken and I unashamedly give you a selection here. 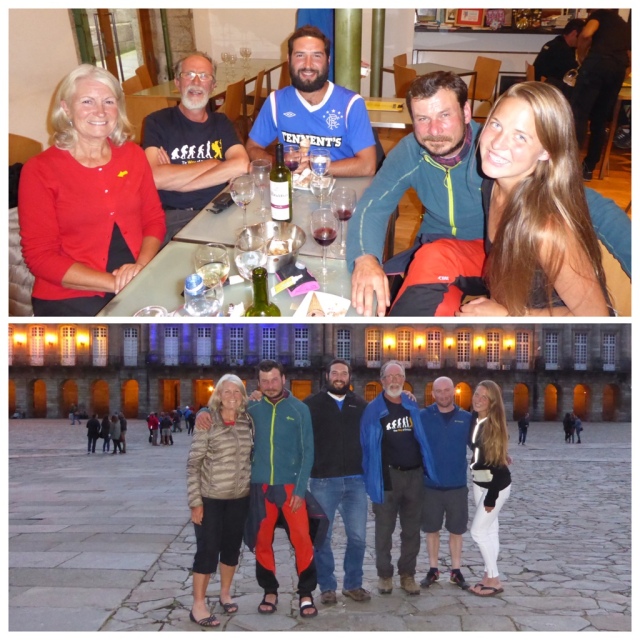 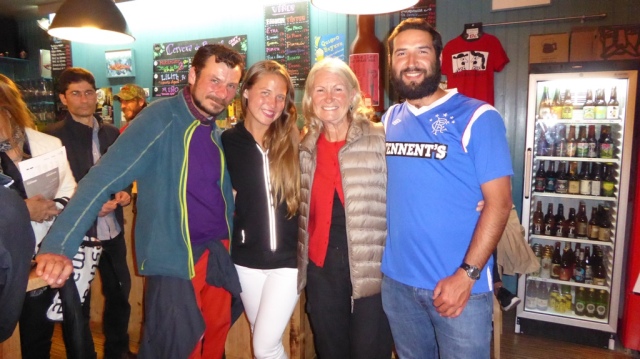 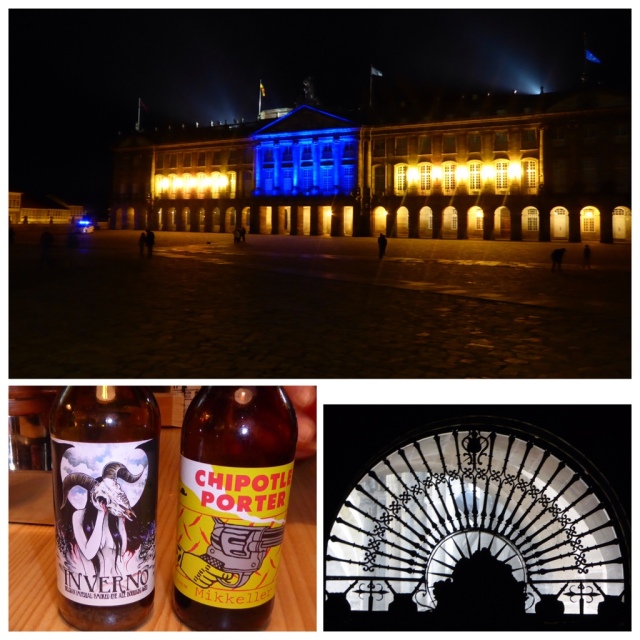 41 Responses to Hanging out in Santiago