A long and lazy summer

It’s been a while since my last post (slightly more than three months in fact). I did start writing the following six weeks ago…

As I start to write this (and I may well not complete it for a few months) it is six weeks since I returned from my latest camino. That just seems ridiculous to me, it feels like an aeon ago. I spent three of those weeks in Spain trying to whip my garden into some semblance of order after six weeks absence during which time there had been an abundance of rain to assist the weeds in growing to unbelievable heights – not all unwelcome – the poppies were so abundant that the garden was reminiscent of the installation at the Tower of London a couple of years ago.

The last three weeks have been spent in the UK, helping my daughter and her partner with support and child care running up to their wedding and post nuptials whilst they enjoyed a child-free honeymoon.

My daughter’s wedding took place on the first sunny day for what seemed like weeks of rain and cloud, she looked absolutely stunning and her husband scrubbed up nicely too. Sophia at 20 months behaved as well as could have been hoped and Mikey at 5 managed to keep clean until the end of the ceremony, although he was sporting some impressive grass stains on his trousers by the time of the reception.

It was a wonderful occasion full of rarely seen family members and friends young and not so young. Rosie hadn’t left a single thing to chance and the day went smoothly from noon to midnight, with fabulous food, wonderful conversations and irresistible dancing music. I couldn’t have been more proud.

And during all of this six week period many of my limited brain cells were filled with the prospect, and then shocking reality, of Brexit. There has never in my experience been such a turbulent time in British politics. All very absorbing and exciting, particularly now that the vitriolic comments on social media have, to a great extent, died down.

And so my walk along the Camino del Norte has been pushed far from my mind during this time, unlike in previous years when it was never far from the surface of my consciousness during the days, weeks and months that followed.

Whilst walking this year, I was aware that I wasn’t thinking about where my next camino would take me. I remember wondering if I was caminoed-out – at the ‘been there, done that’ stage.

Don’t get me wrong, I really enjoyed this camino, I met some lovely people and experienced some pretty amazing adventures. But it just seems a world away from me this year…

And now, another six weeks later, I don’t have much more to share. I have done almost no long walks (morning 5 km dog walks excepted), other than with my camino pal Carsten from Germany who was travelling Spain in a motor home and stopped off to see me for a couple of days. This was in the middle of August and it was really scorching here, but we still managed a 15km walk through the mountains to the lost village of Acebuchal where David met us for a bite to eat and a lift home. 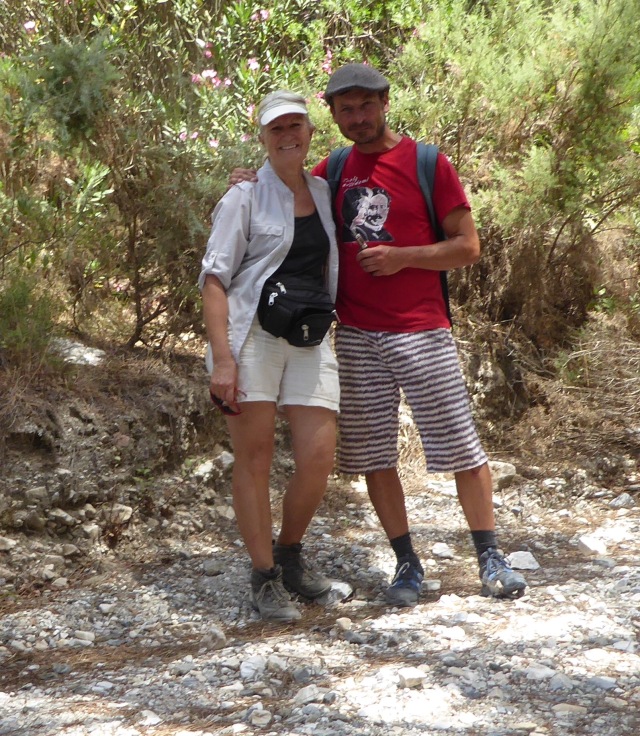 I am glad to report that during the last few weeks my camino mojo has made a long awaited reappearance and I am planning a route for next year. And at the moment I am leaning towards the Camino de Madrid (320 km) which meets the Camino Frances at Sahagún. Then 54 km along the CF to León where I will peel off onto the Camino del Salvador (120 km) to Oviedo and then on to the Camino Primitivo which joins back up with the CF at Melide, two stages short of Santiago (314 km). So, a bit of a dogleg that totals 808 km, and possibly a continuation to Finisterre which will round it up to 900 km. 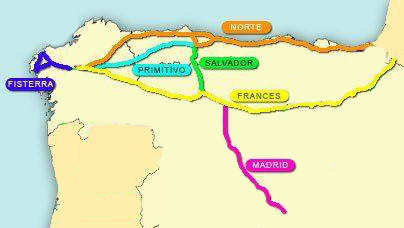 Last evening the first rain in weeks fell on our parched earth and I am hoping that the temperatures will now drop sufficiently to allow my walking season to commence and I can get back into shape after my summer of inaction.

Now that I have broken my silence I hope to soon post a review of the clothes and gear that I took on my latest camino. Watch this space (but don’t hold your breath).

33 Responses to A long and lazy summer