Friday is the day that we have been told all week that it will rain. But Friday dawned bright and warm. Within an hour of walking I had stripped to sleeveless T-shirt and shorts, and immediately afterwards a brisk cooling breeze picked up. It was a pleasant walking temperature once again along wide stony tracks between huge expanses of crop fields.

At around 8 km we reached the first village, which was all but deserted. No sign of life amongst the ruins, an overgrown children’s playground, and most of the buildings built of mud and straw adobe bricks. Very appealing to the eye, but perhaps not very practical in modern life. There was no enticement for us to linger here, so we walked right on. 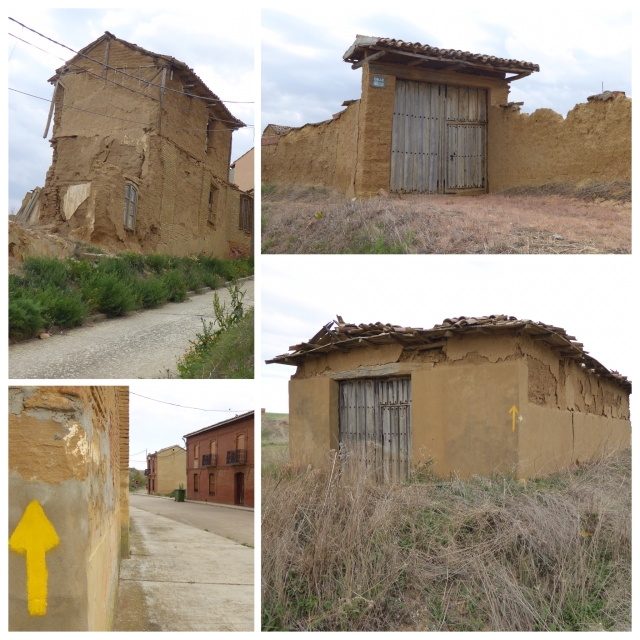 At 16 km we reached Santervás de Campos, were we were promised a bar, both by our guide and by a sign at the edge of the village. We found two, but both were closed. A kindly señora went to knock on the door of the private bar but came back to tell us there was no response and perhaps they were on holiday. We were just resigning ourselves to eating some breakfast supplies on the side of the road when a guy came up to us and told us to follow him. He was the owner of the cleanest, most pleasant bar we have encountered on this camino and we ordered hot drinks and toast to see us on our way. 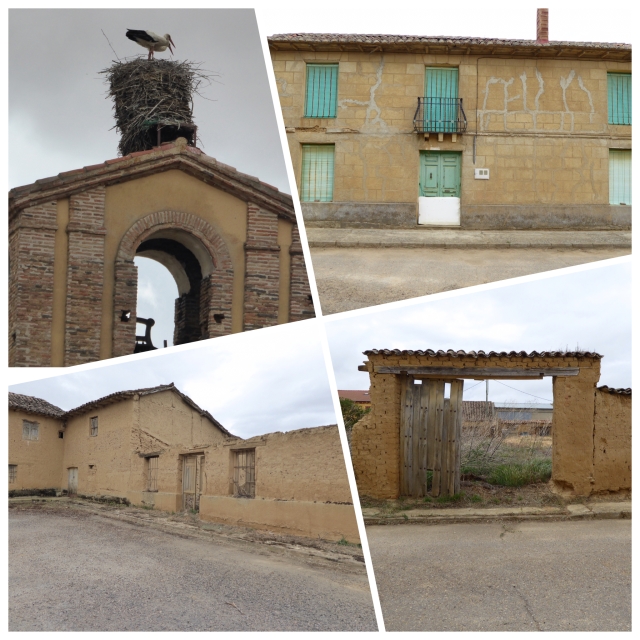 Eli was some way behind, having opted to find breakfast in Villalón. She also had other plans for the day – to take the shorter route to Melgar de Arriba, whereby she would cut off a section of the camino Frances. We three had decided to stick with plan ‘A’ and continue in a different direction to Grajal de Campos, a town with not only two castles, but also a palace.

We continued for a further 15 km, during which time the wind gathered force and the rain started to fall, but never more than a heavy spit. It remained good walking weather. The latter part of the stage was on the bank of a river on lovely soft grass – heaven! The banks of the river had been burned off and there were fried snail shells all along the way – I wondered what other poor creatures had been decimated by this treatment. Lots of trees had also suffered – a rather extreme method of weed control, but maybe better than liquid weed killer alongside a waterway.

Finally the castle and church of Grajal came into view, albeit several kilometres in the distance. We arrived into the Plaza Mayor looking for a very special building. We were told that a telephone number would be displayed on the door, but no such number was visible. We wandered over to the bar and were given the number which I duly phoned and arranged a rendezvous a few minutes later. I left Marilyn and Paul in the bar and went off to meet the hospitalero.

I was given a key and went back to join the others at the Meson Las Cepas where we had an extremely good lunch and then I lead the way back to our palatial accommodation. I do not exaggerate with this description – we are staying the night in a palace – it might be in a partly ruinous state, but the albergue accommodation is brand new. There are 24 places, blankets still in their wrappers, FOUR, yes FOUR bathrooms, each with loo, shower and basin. We have one each – absolute pilgrim heaven. No kitchen or utensils, only a microwave. No wifi in this palace, cost 6 euros.

We have free reign to wander around the palace at will. I was like a child in a sweet shop and poked my nose around every door I could push open. It was fascinating. There were rooms full of beams, others full of stone artefacts, another with farming equipment. The central courtyard is in excellent condition but there are several rooms and minor stairways that have fallen to pieces. No health and safety restrictions here, much to my delight. Behind one door I found a huge garden where our washing was hung to dry. I doubt I will get to hang my knickers in a palace garden again! 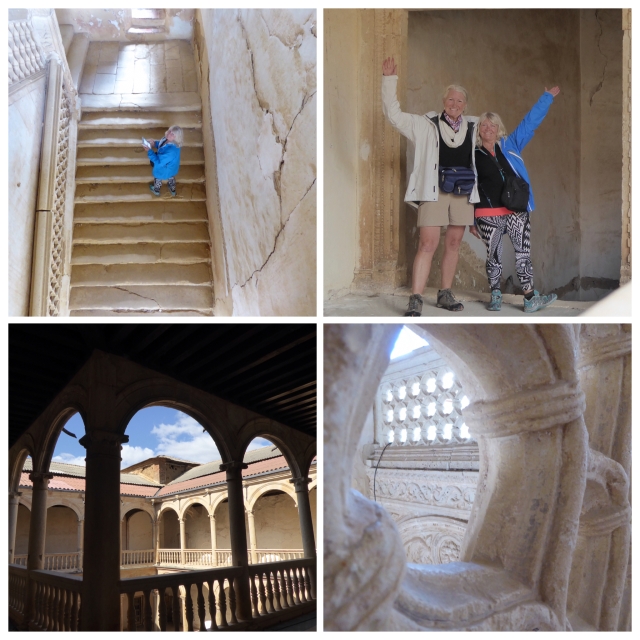 Unfortunately this weekend is party time in Grajal de Campos. The Plaza is set up with a stage and lighting and a bar. I anticipate that the music will still be playing when we rise in the morning. We can dance our way out of town.
(I have just returned to the albergue at 22:00 and the band is practising. Our beds are about five metres from the stage. Lucky I have lots of experience of trying to sleep under these conditions!)

This place in an absolute must for anyone walking the Camino de Madrid. It is also the last full stage, tomorrow we will cross over on to the Camino Frances for a couple of days. I’m not looking forward to encountering the hoards after such a quiet camino, but hey-ho, it will be what it will be. Patience will be called for – I shall have to muster some for the occasion.