I felt very sluggish this morning as I walked the three km out of Plasencia. I haven’t eaten that well the last couple of days and maybe I am lacking some nutrients. 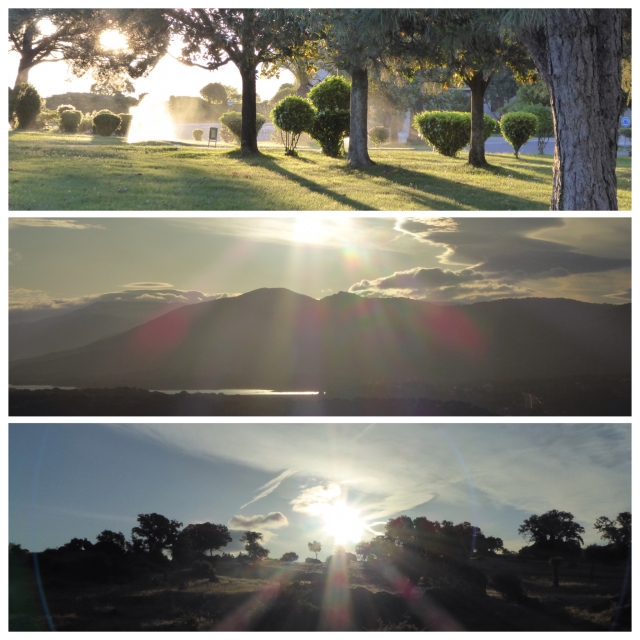 As we passed the last house in town the countryside opened up to us. Great swathes of green hillsides with a glimpse of the sunrise bouncing off the Rio Jerte in the distance.

We were immediately walking through land strewn with giant boulders and dotted with holm and cork oaks. That was good, but the not so good was that we were soon enough faced with a steep climb up to a church at the top of a hill, and even worse was that we were walking on a Roman road. Now I’m sure these guys built brilliant roads in their time, but really, they are the very worst surface to walk on…EVER. They play havoc with your feet, twisting and turning and tripping.

But the prize was the view from the top of the hill through the arches at the back of the church. 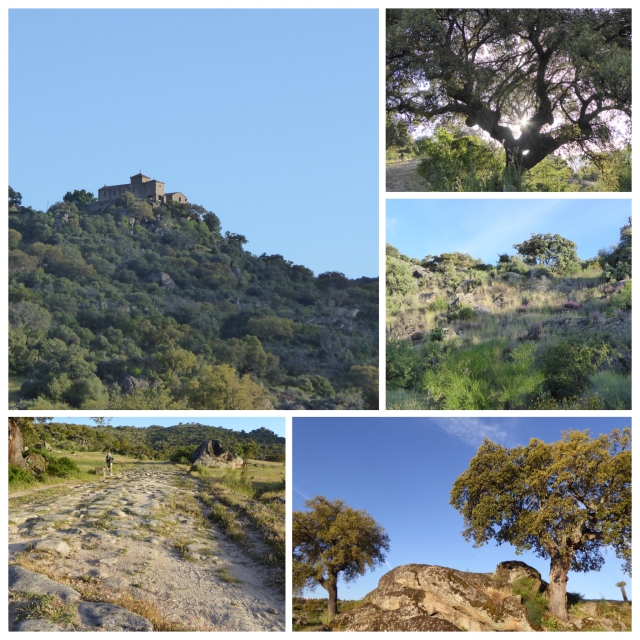 And then we walked up and down through fabulous countryside on grassy paths, through meadows and woodland. We were sharing some of the walk with cows and their calves and therefore inevitably there were areas of boggy slosh to negotiate, but all in all it was a spectacular walk. The cork trees hereabouts have their bark harvested and the resulting dark reddish brown of their stripped trunks looks spectacular in the sunshine. A lot of the cork oaks have died, and I guess that the harvesting of the bark saps their strength. 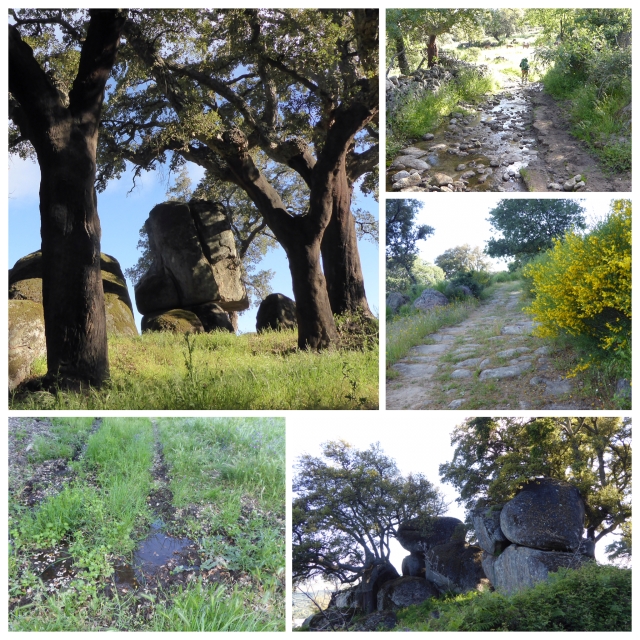 We have passed the first instance of broom in flower and the scent is delicious.

We pass through many gates – some well maintained and easy to open and close. Others not so, made of old bed springs and coils of wire and bailers’ twine and almost impossible to manoeuvre. We eventually find ourselves on tracks through dehesas. There are a multitude of tracks and it is difficult to follow our route. I have to keep my eye on my phone screen almost all the time to make sure we stay on track, which isn’t great. We have to walk across the middle of fields on several occasions to regain our route. It is a real puzzle and we would not have stood a chance of finding our way without a track on maps.me.

The dreaded Roman road keeps popping up time and again just to remind us that this is not a walk in the park!

After around 14 km we start to see more regular signage including the occasional yellow arrow,  and I wonder if we are now on an alternative route of the Via de la Plata (VdlP). 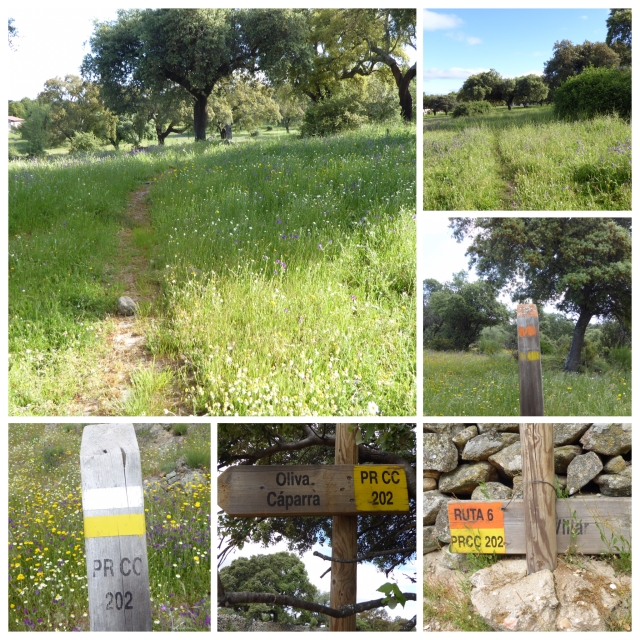 All in all it is a morning of quite hard but very beautiful walking.

At 17 km we reach the village of Villar de Plasencia, entered by way of a pretty (Roman?) bridge and some delightful mosaics outside a children’s playground, but the rest of the village is rather ugly, although we do find a welcome bar for a late breakfast of tostada con tomate. 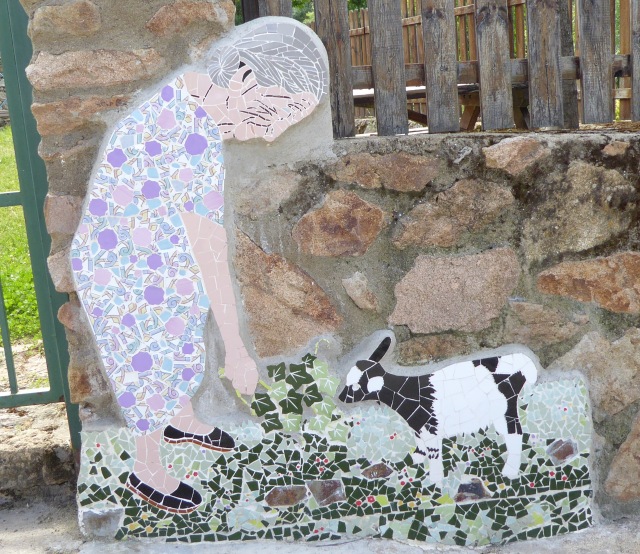 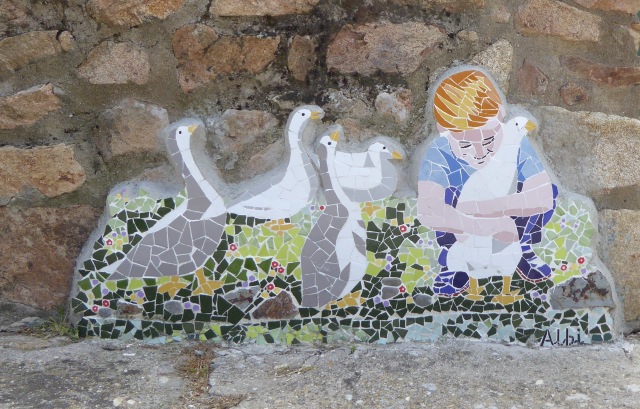 Following the track that I have downloaded we join the N-630 at 20 km and remain on it for 5 km. we stop at the rather depressing Hostal Asturias for a drink, which appears to be a truckers’ stop. Sadly there was a lorry parked up with a load of pigs onboard which were crying plaintively and we were very pleased to leave.

At 25 km we were back onto a track for most of what remained of the stage. At 30 km we have joined up with the Via de la Plata camino that runs north from Seville and we saw the first camino signs since leaving the Mozárabe at Magacela.  Perhaps the last 1.5 km was on the road into Aldeanueva del Camino and on arriving we made our way to a private albergue ‘La Casa de mi Abuela’. We have both stayed here before and liked the place. We have bottom bunks and we are two of three women and many more men of various nationalities. 13€ including bedding. We are now back on a regular camino and will have to get used to sharing our space.

I enjoyed a supper of pre-packaged rice and quinoa to which I added tomato, avocado and courgette. Very tasty and nourishing.

I would like to recommend the bar on the main road in Aldeanueva.  It’s on a corner I think with a terrace garden at the front with palm trees.  I asked for a cafe con leche grande for Marilyn. He showed me a largish glass and I indicated larger.  He made her a delicious coffee in a half pint glass. I then cheekily asked for a vino blanco grande and received exactly that – two or three times the size of recent stingy measures.  He charged us one euro each.  What a bargain!

Sorry for the delayed posting – I had no signal on either my phone or iPad in the albergue and the wifi was useless!