There was a tearful farewell this morning as I departed from my best camino buddy. But there is no doubt that we will walk together again. Farewell my friend for the time being and safe journey home to South Africa.

We were walking on a track almost immediately on leaving the city. It was a cold start, but we were walking on a lovely track past copses of poplars with a fast running stream alongside and granite blocks forming bridges across the water.

We pass through the first village at 3.5 km – I like the stages that have lots of communities to pass through as there are interesting things to see and people to communicate with. I made slow going through the woods as I was collecting flowers to make a bouquet to send (via whatsapp) to Marilyn to wish her a safe journey home.

After passing through the village we are on the road for about 2 km, then back onto a beautiful track. Village two came at 5 km, then on quiet road for another couple of km, then back on track. Next village at 7.5 km…this format of village/quiet country road/track formed the pattern for the day and was repeated over and over. Perfect camino walking, but with a considerable amount of elevation. 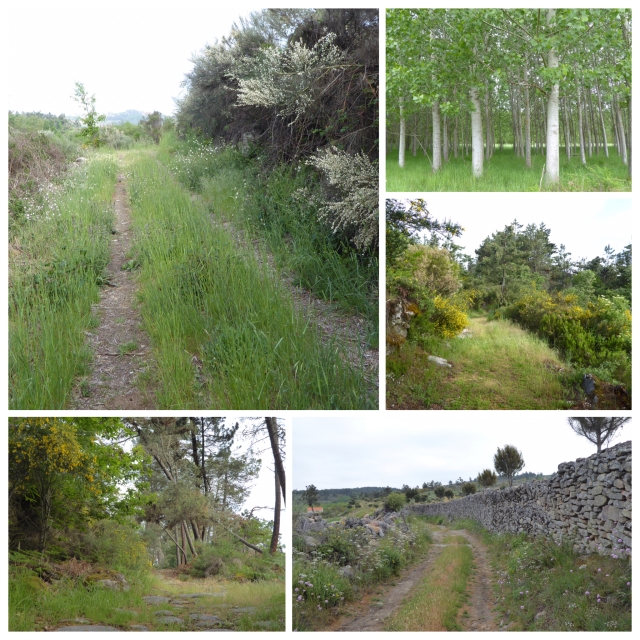 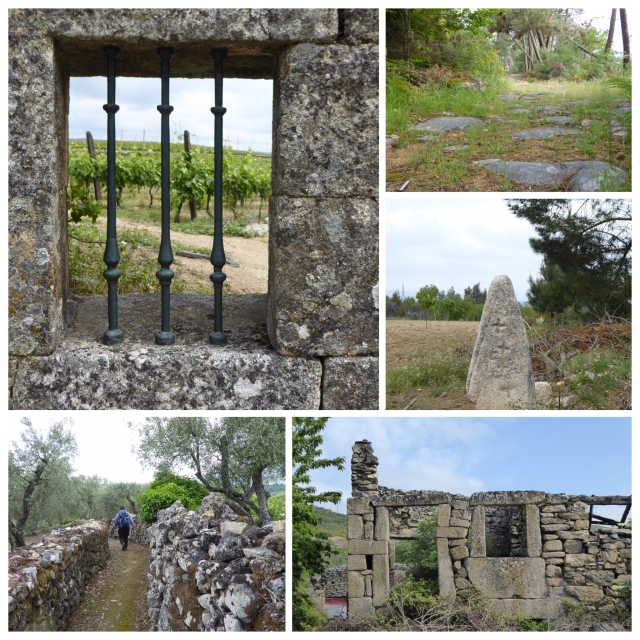 There was a battle between the sun and cloud today. There is heavy cloud cover and when the sun manages to put in an appearance it is very warm, but otherwise it is quite cool with a fresh but gentle wind. Sleeves are raised and lowered very regularly.

I managed to lose the track amongst the many apple orchards , but when I joined up with Eli, I discovered that she has done the same. So perhaps the route has been slightly diverted from the tracks we downloaded. Generally the signage was very good today.

The fruit trees are planted just 2 feet apart although there is space between the rows for a picking machine. It seems very close, and when the trees grow they will form a solid wall.

I have seen a lot of elder trees growing – until now just occasional trees growing at the edges of fields and tracks. But today I see them cultivated in orchards. I haven’t seen this before and am told that the produce is exported to Germany as jelly. There are also lots of beech trees. And cherries, and quince, and vines. 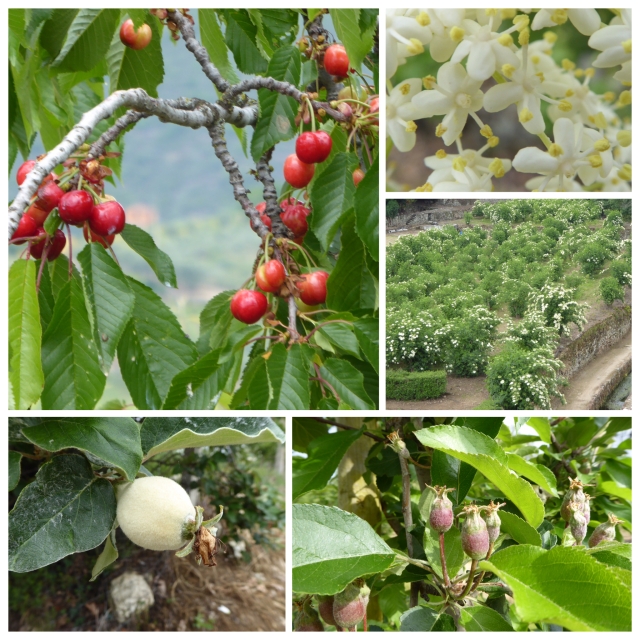 We dip steeply down to Ucanha an ancient and charming village with an impressive stone bridge spanning the Rio Varosa. As we reach the bridge a young man invites us to climb the tower at its approach. 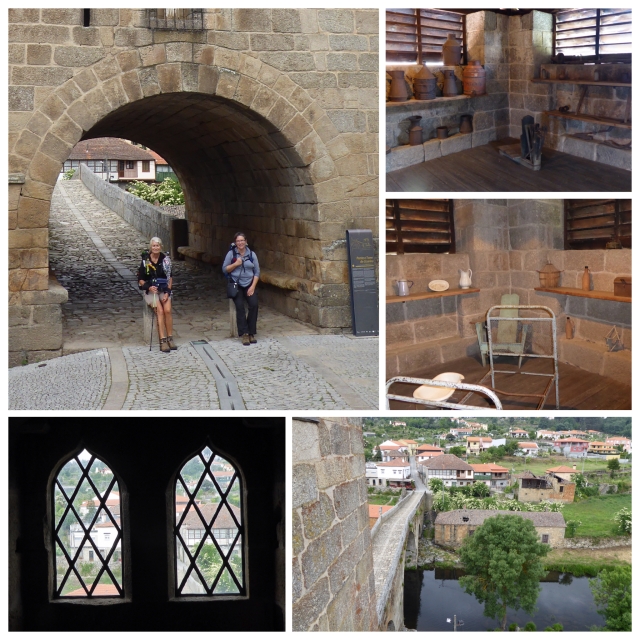 We climb four flights to stairs to the top of the tower and survey the quaint houses and ruins of the village and the rich green valley beyond. I love the opportunity to explore such places and have great fun peeping through arrow slits and down the gaps made for pouring boiling oil on those who refused to pay the toll to cross the. bridge.

Practically every inch of these fertile valleys is packed with fruit trees and vines, and there are many new orchards being established. I admit to scrumping some delicious cherries from the roadside and stashing a small supply for later.

Our last steep descent and climb take us to our destination, Lamego, where we look around the cathedral and then take the weight off our feet in a bar opposite whilst we await the arrival of Aurelio, who had returned from visiting his mother. We are staying in Resedencial Solar de Sé, twin room for Eli and me 39€, breakfast included, very clean, nice bathroom. We open the curtains to find that there are doors to a tiny balcony which is facing the cathedral.

Aurelio tells us that we are meeting with his friend who lives in the city. We shower and change and walk out to meet them, expecting to have a drink in a bar, but no, we are ushered into his car and driven to see a monastery – quite a substantial drive that takes us back in the direction from which we walked today. We arrived at Mosteira de São João de Tarouca and were given a guided tour of the ancient church next door to the ruined monastery. 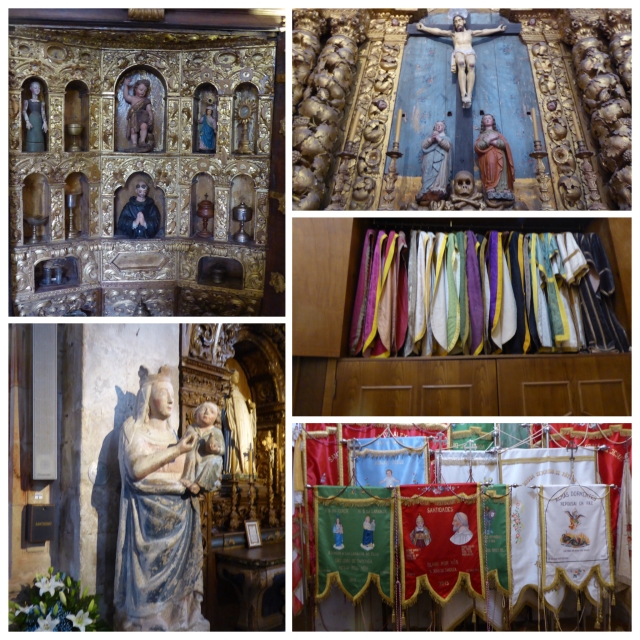 After that we returned to Lamego under dark stormy skies accompanied by thunder and lightning and a little rain – my thoughts were centred around finding a supermarket in this large town so that I could buy some healthy food, but we were whisked across town and wound our way up to the top of a very high hill to a viewing point where we could (only just due to the dark sky) look over the Douro Valley to the river far below.

Then we were told we were going to eat cherries (well, I had been doing that most of the afternoon!). Back down the hill we went, through town again and then back up a hill on the other side until we reached the gates of our new friend’s house where we went into his back garden and raided his cherry tree. It finally dawned on me that we were actually going to eat with this kind man and his wife who was busy in the kitchen preparing mounds of food.

Eli and I were ushered into the living room where we were served Portuguese Espumante (the equivalent of champagne) made from grapes harvested from vineyards we could see from his window. When we were called into the kitchen to eat, my eyes almost popped out of my head when I saw the extravagant spread of food, mostly made with me in mind. A huge plate of delicious vegetables topped with fried onion and mushrooms, a colourful mixed salad, a plate of lettuce just plucked from the garden and tomatoes, a cauldron of sticky rice and a plate of meat for the others. I felt so honoured to be catered for like this and the food was so very wonderful to eat. For the finale of this culinary extravaganza a bottle of Port was brought to the table. Not any old Port mind you, this nectar was sixty years old and tasted so smooth and sweet and delicious. 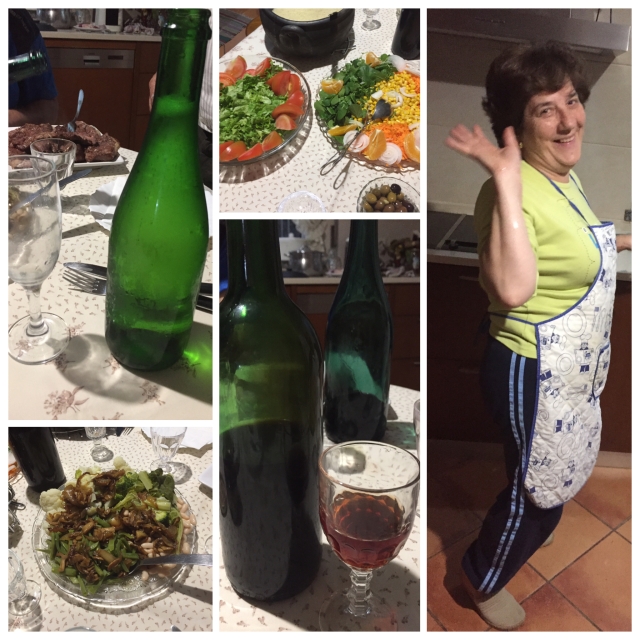 We were then driven back to our accommodation where the cathedral was lit up and shining through our window. It was a fabulous day’s walking and an amazing surprise after we arrived. Such wonderful hospitality was offered to complete strangers. It will be a day that I will always remember. The only thing that was missing was my dear friend Marilyn who found herself with transport difficulties and had to wait all day for a train to Salamanca before her onward trip to Madrid.