A day in Dubrovnik

Well, this evening my legs feel as though I’ve been in a gym all day, working out on a stair master.  My day started early.  I was awake at 06:00 and out of the door by 06:30 – it was planned to be earlier but someone was hogging the one and only loo.  I headed towards Park Orsula, east of the city, reported as one of the places to witness a spectacular sunrise.

There are always steps, either up or down when departing from the hostel. This morning they were up and I exited through the city wall via the Buža gate.  After walking through the outskirts google maps directed me to cross the road and take a left turn. Google failed however to warn me that the left turn involved a never ending flight of steps – one hundred and eight five of them to be exact. Then I was walking along a narrow one way road with no shoulder which was never intended to be walked. Up and up it went. Luckily at that time in the morning there wasn’t much traffic but it was a bit hairy and probably 2-ish km. 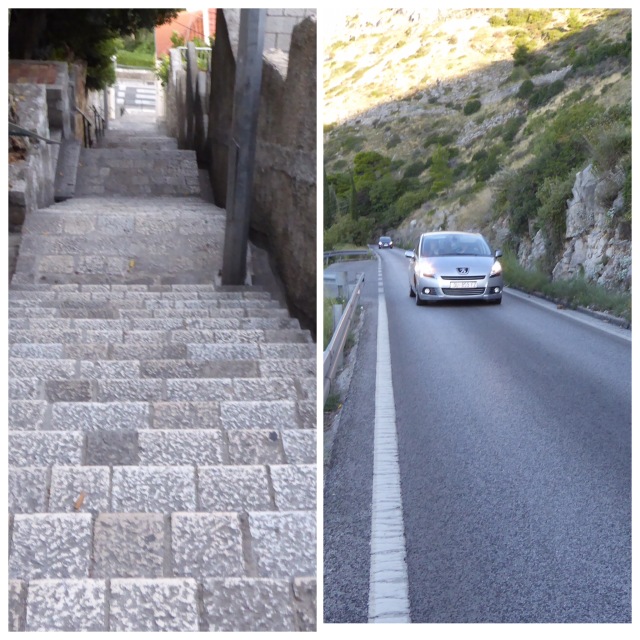 I looked back to the old town a couple of times and saw a very pale and insipid sun rising, which soon disappeared from sight completely.   Hardly worth the effort I thought.  But I was already committed to my jaunt, so carried on regardless. It wasn’t until I reached the peak and rounded the bend of this road that I realised (D’oh! – dumb or what!) that what I had been looking at was the moon sinking over the city whilst the sun rising over the mountains of Montenegro almost blinded me. 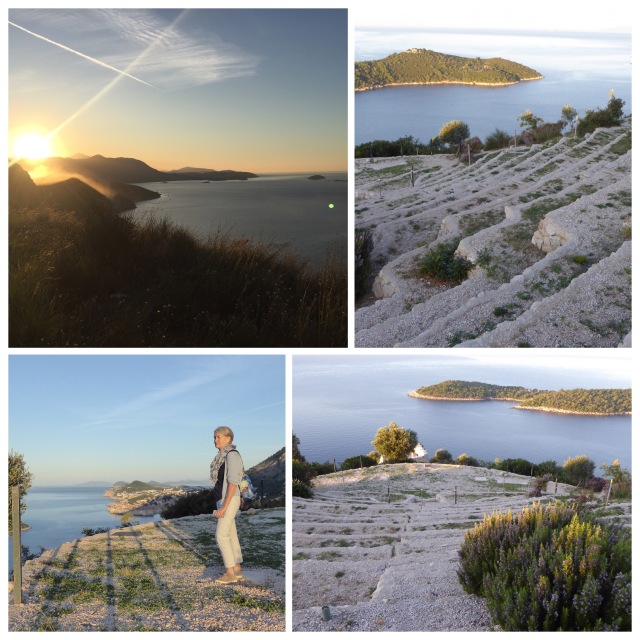 The area looks as though it is just a viewing point with some parking lay-bys – not a park at all. I was rather disappointed after my 3.5 km early morning uphill hike.  But wait!  I spied a gate. It led down steep rocky steps to a primitive amphitheatre with the Adriatic Sea for a backdrop.  I had the place absolutely to myself and it was magical. I watched as the sun gradually swept across the old town, highlighting the harbour and the city walls. Stunning!  I hung around for ages, spellbound by the atmosphere. I finally tore myself away and retraced my steps.

I thought it would be slightly more comfortable walking back down the road with the traffic coming towards me, but I was wrong. It was much worse seeing vehicles speeding towards me and sailing past with maybe a metre to spare. I can’t recommend walking to this point, but an early morning taxi might be the way to go.

I bought a bread roll and packet of biscuits when I returned to town and dropped into the hostel to change into something cooler (my ever-useful camino skirt and top).  There is a lovely roof terrace at the hostel where I ate the roll and some cherry tomatoes that I had brought from home.

Having breakfasted and changed, I headed back down the 100 steps towards the main street – Stradun – and received a real shock to the system. What had been a calm and welcoming environment when I arrived last evening was, at 10 am, a boiling mass of tourists – group after group of guided tours filling the street – really not my cup of tea.  But I dutifully purchased my ticket to walk the city wall at a staggering cost of 200 kuna (£23!).  That was well outside my spending comfort zone, but it had to be done. The wall entirely circles the city – it was well worth the small fortune!  Of course there are many steps up and down and always the sparkling Adriatic Sea to be admired. 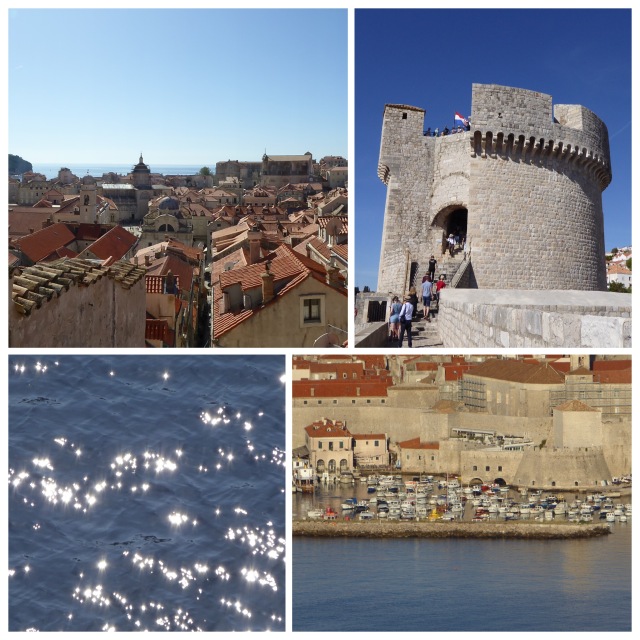 This tourist city is expensive for my stingy wallet. 50 Kuna (£6) for a glass of wine – and I needed several glasses last evening to make up for my protracted abstinence.  After circumnavigating the wall I visited the highly recommended vegan restaurant ‘Nishta’ and I wasn’t disappointed.  I ordered a  falafel wrap which was delicious and sufficient for lunch with plenty left over for a takeaway supper, 69 Kuna (£8). And then it was time to climb the 100+ steps back to the hostel for a much needed snooze.

Next on the list was a visit to the cable car that whizzes up to the plateau of Srdj Mountain. In just four minutes you find yourself at 400 metres above sea level with incredible views over the city. I opted for a one way ticket at 90 kuna (£10.50 – 170 kuna return trip).

I chose to take the long and winding road back down to the city. And it was a long zig-zagging rocky, stony track through wooded hillsides. I was glad that I was walking down rather than up, but I felt the need to  be aware of very step I took on the loose stones.

I would say it was three quarters rough track, and one quarter suburban path and I was well and truly knackered by the time I walked back through the city wall via Pile Gate and headed up many more steep steps towards ‘the place’ to witness the sunset at Bar Buža. I was in the company of hundreds of like-minded tourists lining the uneven steps that led to the vertical cliff dropping into the Adriatic, where a few brave souls dived unknown metres into the sea.

The sunset was not quite as fabulous as that over the Atlantic at Finisterre, but not far behind. 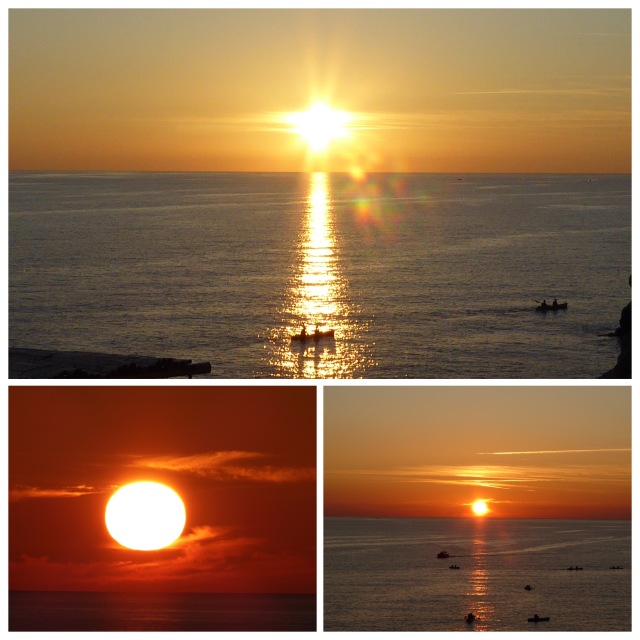 I am writing this sitting in a bar/restaurant on Stadrum, listening to beautiful live music and enjoying very expensive wine. I am on holiday after all!

As a point of interest…the main reason I chose Dubrovnik as the starting point for what I hope will be a series of trips to previously unvisited European cities, is an old song by Liza Minnelli. From the 1972 album ‘Liza with a Z’. My cassette tape of this soundtrack was played over and over in my car for many years. When my kids came along more than ten years later the tape was still in the car and they both remember me accompanying Liza belting out the songs (there’s nothing like a captive audience!). The words of the track ‘Ring Them Bells’ have stayed in my mind over the years, in particular…”Try Dubrovnik, dear before you go home”. Whether of not you are familiar with the song, take a look at the video – she is such a talented performer.

Trepidatious Traveller - camino blog is about preparing for and walking the Camino de Santiago. Many future pilgrims have found the blog useful and inspiring, and many who have no plans to walk the camino have simply enjoyed the dialogue http://www.magwood.me
View all posts by magwood →
This entry was posted in A view of life, Camino de Santiago de Compostela, Discovering Europe and tagged Croatia, Dubrovnik, Europe, Liza Minnelli, Sunrise, sunset, travel. Bookmark the permalink.

5 Responses to A day in Dubrovnik