After a long and very restful night’s sleep I slowly packed up and left my bag at the accommodation whilst I went to visit the Vera Spila cave. I followed the marked path but soon realised I had missed a sign (I have enough experience of missing signs on the camino to know the signs!). I retraced my steps until I found a likely looking narrow and very steep lane and checked with someone on the way up that I was going in the right direction and soon started to see the signs again. Once above the town the track was entirely on a concrete path with, of course, many steps, that led through olive groves and afforded a more impressive view over the bay below with every few steps. I finally reached the entrance to the cave after climbing 130 metres over about a kilometre. 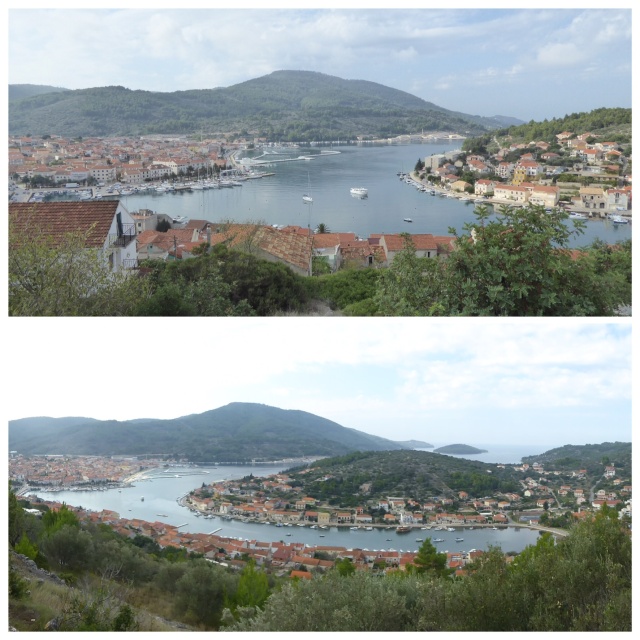 Although the cave is due to open at 11:00 the gates remain firmly shut until finally a middle-aged woman comes panting up the track calling out her apologies for being late. The other couple waiting had come up on the road by car. Although very interesting, the cave is not spectacular, other than the two openings to the sky. No stalactites or stalagmites, no interesting formations, just rock and mud. The woman in charge, having regained her breath, thought I was together with the other couple and said that as we had to wait she would just charge for two rather than three. The entrance fee is only 15 kuna anyway. When I explained that I was alone, she insisted that I come in for free. And when I put up a weak argument she said well, they are younger than you – let them pay! So age wins out over youth yet again! Another result for us grannies – you’ve got to take them where you find them!

Lovely lady suggested I visit the museum in town where I can see all the artefacts they have excavated from the cave, which I duly did, and was duly impressed. 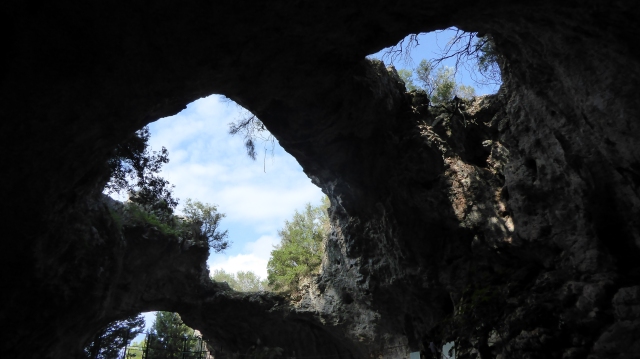 Vela spila is located on the southern side of Pinski Rat Mountain, 130 m above the cove of Kale in Vela Luka and is one of the most important prehistoric archaeological localities in Europe.

The archaeological finds from this site prove that several prehistoric communities have been living here and using the cave in their every-day life and for burying their dead.
These extremely significant finds include thousands of pieces of ceramics, whole vessels and other objects made of earthenware. They serve as the proof of the long history of cultural, social, spiritual and economic relations between the inhabitants of Vela Spila and other parts of the Adriatic and the Mediterranean.

Excavations and the archaeological investigation of the site lead to the conclusion that the cave has been continuously inhabited from the early Stone Age (about 20 000 bc), and there is evidence of an occasional human presence in the following periods – Iron Age and Copper Age. To this day it has been used by the Greeks, the Romans, the Byzantines and many others.

The entrance to the cave is 1 to 10 meters wide, up to 4 meters high, facing south and offering a beautiful view of a large bay, fruitful Blatsko Polje, the islands of Ošjak, Kamenjak and Proizd, as well as of more distant islands like Vis, Sušac, Sv. Andrija, Biševo and the open sea.

There is a valuable archaeological collection of objects that have been found on this site in the Culture Centre Museum in the town centre of Vela Luka, and visitors can visit the cave in two ways: By car, for there is a 2,5 km road leading from Kale cove to the cave, or on foot along a walking path on the Pinski Rat Mountain.

I then had a couple of hours to kill before needing to retrieve my pack and head for the ferry. So I found myself a sunny bench overlooking the quay and caught up with a few episodes of ‘The Archers’. There were tears shed. I shan’t say why just in case anyone reading this has yet to catch up with recent happenings – but let’s just say I got through two tissues!

Then it was time to grab my pack and head for the ferry – the 15:00 car ferry to Split. Much more utilitarian than the relatively luxurious foot passenger ferry I caught a couple of days ago. I catch up on a couple of episodes of the French thriller ‘The Disappearance’ – a jolly good series and no tissues required!

Three hours later we arrive in Split. Such a change in tempo. There is a great buzz to the town. I eventually locate my accommodation (Downtown Hostel, £28.50 for a bunk for two nights). It is situated right in the heart of the town which will probably mean its likely to be a bit noisy at night, but we shall see.

What a difference a town makes! Split is totally buzzing – a real party town. Bursting at the seams with young people. More discoveries to be made in daylight tomorrow – but on brief acquaintance it feels entirely different from Dubrovnik.

Trepidatious Traveller - camino blog is about preparing for and walking the Camino de Santiago. Many future pilgrims have found the blog useful and inspiring, and many who have no plans to walk the camino have simply enjoyed the dialogue http://www.magwood.me
View all posts by magwood →
This entry was posted in A view of life, Discovering Europe and tagged Croatia, Europe, European cities, Korcula, Split, travel, Vela Luka, Vela Spila. Bookmark the permalink.

3 Responses to Vela Luka to Split