So life is just about back to normal.

It took longer than it should have because, after being home for a week, two things interrupted ‘normal’.

On the Sunday afternoon we had been to see one of our favourite bands – Guiri – and on returning home I had a call from Carol, the lovely lady who runs the local garden club, asking if I would fill the gap left by the speaker who could not attend the next meeting due to a car accident.

I’m sure you are aware of the maxim ‘put your brain into gear before engaging your mouth’. Well, my brain stalled, and before I could control my tongue I heard myself saying yes.

Of course, this could have had something to do with the several glasses of wine that I had consumed during the afternoon. In fact I am positive that it was entirely due to the wine because I had just agreed to speak in public for the first time, at an event that was only eight days away, when my daughter Rosie, her partner Mike, her Dad and my gorgeous grandson were arriving the next day and staying for a week.

Oh yes, and this was compounded by our car having an argument with a lorry on Monday morning and losing. The front end and light unit were destroyed and I needed the car in the evening to collect my family from the airport. Oh, and then discovering that the car seat we had arranged to hire was too small for Mikey, and I had to buy one locally. 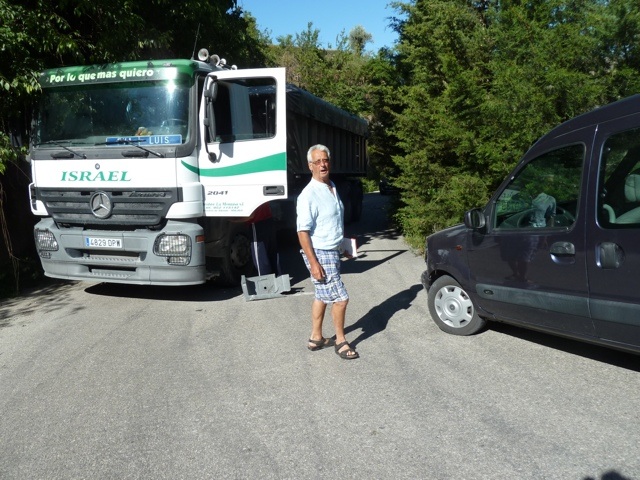 Amazingly everything was sorted in time, thanks to ‘La Boutique’ in Cómpeta I was able to purchase the car seat that Rosie wanted for her son, and David arranged a temporary repair on the car so that I could legally drive to the airport.

Of course I was absolutely delighted to have my family visit, the only problem was that I wanted to spend as much time as possible with them, which left little time to prepare my presentation. The week was a blur of bbq’s, picnic at La Fabrica (thanks Janice for organising and everyone for joining us), visit to the beach, lots of eating out and a truly fabulous time with my wonderful family. 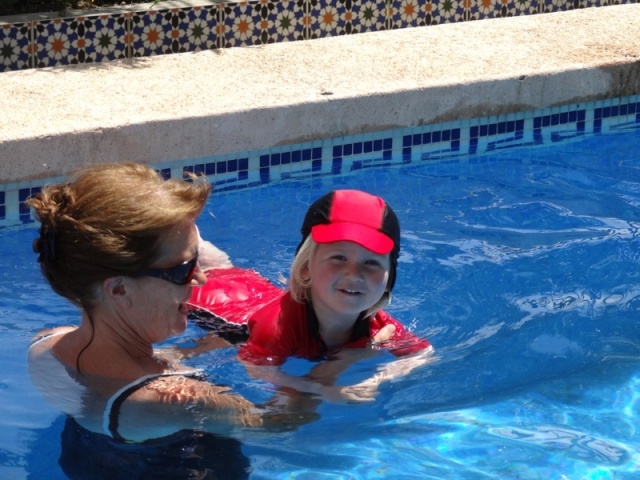 So then I just had to work out how to prepare a presentation, using a selection of the hundreds of photos I had taken during my camino, and decide on the words I wanted to say to convey the amazing journey that Ella and I had undertaken.

After a quick google search I decided to use Microsoft Photo Story, a free piece of software that was simple and easy to master. Now I just had to write the accompanying words and fit them to the photos. I grabbed every moment that I wasn’t with my family, and finally finished to my satisfaction (more or less) at 3:00 am on Tuesday morning, ready for the presentation at 11:00 am that same day.

There was a respectable turnout of both garden club members and others and it all seemed to go rather well. I had my head down in my notes way too much, and I think I would be more confident in talking ‘off the cuff’ if I was to do it again. All in all I was pleased that I had done it, and if I had had more time to prepare I would probably still have been up until the early hours of the morning of the presentation.

I was able to announce that David had collected 820 euros in sponsorship from the marvellous people of Cómpeta and Canillas de Albaida, with help from Oscar from Taberna de Oscar and Sergio from La Casona who both contributed a meal for two to be raffled. This money will be passed to the charity Cudeca Foundation, which operates a cancer hospice for residents of Málaga province, financed entirely by donations, 90% of which come from the public.

David worked really hard, accosting the unsuspecting souls of the villages, and people have been astonishingly generous with several donations of 50 euros and many of 20 or 25. And there are plenty of other charitable events calling upon the generosity of locals, raising money for the same charity, also for the poor of the villages, and for animal charities. So once again, a huge thank you to one and all.

I, on the other hand, have not done very well with raising funds from my UK friends and family. Solely I am sure, because I haven’t mentioned it sufficiently. If anyone would like to make a donation to Macmillan Cancer Support they can do so by visiting the ‘Just Giving’ website.

I have set up a donation page at http://www.justgiving.com/Magwood, or if the link doesn’t work, then google ‘Just Giving’ and near the top of the page is a search box for ‘friend’s name’, type ‘magwood’ here and my page should be at the top of the list.

Click on ‘Maggie’s page’ and in the top section there is a button to click if you wish to donate.

I don’t expect to raise anywhere near as much as we have done here in Spain, but it would be great if I could increase it from £80, where it stands at the moment. The Just Giving site is used by most charities because it is so easy for individuals to make donations. The entire donation goes to the chosen charity within a few days. Just Giving claim gift aid on donations. The charity pays a fee. All profits are re-invested into ‘technology and innovation’. See here http://www.justgiving.com/en/about-us/how-justgiving-works.

And just to add to the stress of the week, on Saturday night we returned home after an evening out, to find that we had suffered a visit from our local thief. One of very many over the last five years. He entered through a small bathroom window, the only window without security bars (although it has them now!). The thief is called David, he lives in Canillas, and he suffers with ‘mental issues’. He also drives everyone in the area to distraction by his frequent visits. It seems the police can do nothing because of his mental status. But in fact he is very wily. He takes odd things and sometimes even returns them later. He also occasionally leaves things he has taken from elsewhere. He left a boxed silver bangle in our garage a few years ago. If anyone recognises it, please let me know.

On Saturday night he just took sterling, £60 that I had in my purse and £45 that David had in a drawer. Right next to my handbag where he found my purse was the carrier bag in which David had a considerable amount of sponsorship money, totally untouched. Also left in place were an ipad, mini ipad, laptop, printer, iPhone and another mobile phone.

He has caused us, and many others, so much trouble and stress over the years. I went to his house on Sunday morning and spoke to his mother, but from what we understand the whole family are involved in some way or another. We went to the Guardia Civil this morning to denounce him. But I suspect nothing will be done. They are sympathetic but their hands are tied. They don’t have a ‘crime scene’ department and do not take fingerprints for ‘small crimes’.

I am not at all intimidated by this thief, who is in his thirties. A couple of years ago I just stood in front of him and took his photo. His appearance varies from time to time – with or without specs, with or without facial hair – but almost always with a back pack and he always operates at night or very early morning.

Please, if anyone has been the subject of his activities, take the time to go to the Guardia Civil in Cómpeta and make a denuncia against him, and then take a copy to the mayor of Canillas. We all need to make the effort to put a stop to his activities.

Rant over. Apologies. It is just a shame that this has to be included under the heading ‘back to normal’!

I was very pleased when my friend Pepe turned up yesterday morning. It is ages since he called round to ride together and as I was already halfway through preparing Liana for a ride, his timing was perfect

Summer has truly arrived this week with temperatures well into the thirties. I don’t know how long I can wait before turning on the AC, but if it continues like this, it won’t be long.

I am planning to write a couple of posts summarising the camino, reflecting on the experience and rating my gear. I most definitely don’t have the discipline that I had on the camino to post regularly, but I hope to retrospectively tell the story of last year’s trip to the Far East and maybe the odd tale of life in the campo of Canillas.