Hung out to dry

We took a trip down the mountain to the coast today.

We have been considering a new phone/internet service for some time (months, actually) and finally got around to doing something about it – or not, as it turns out. The tariff that has been on offer for months with Telefonica ended on the very day we decided to go for it. If we had tootled off yesterday, we would have got the deal we wanted. Oh well, that’s what happens to procrastinators!

But seeing as we were by the sea we thought we would stop off at Caleta and give Roly a run on the beach. It was a beautifully sunny but windy morning and there was almost no one to be seen. The sand was pristine and the sea was sparkling. Roly had a wonderful time running in and out of the waves and it was just heavenly to sit on the rocks and watch him having fun. 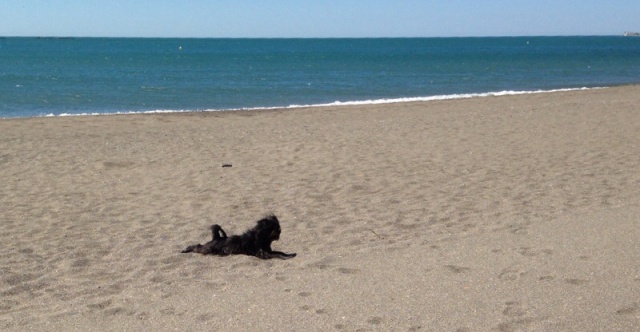 At the entrance to the beach we saw this peculiar sight – a line of fish fillets hanging out to dry. Not on private property, but alongside the parking area. Very peculiar, but a good photo opportunity. 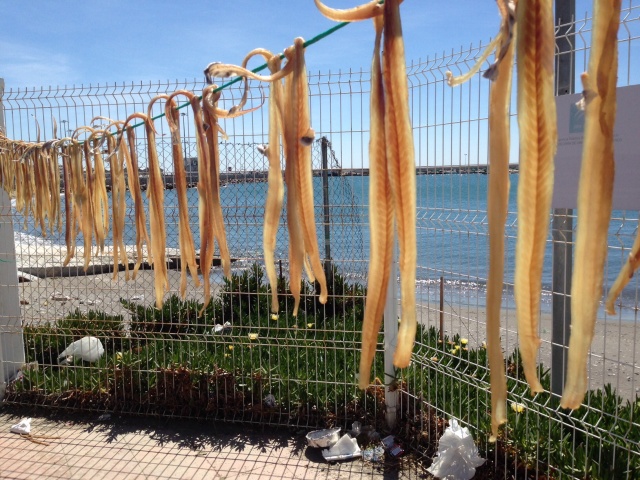 We wandered along to the marina to the restaurant El Camarote to share a tureen of what is consistently best fish soup you are ever likely to taste. By the time we drove back past the beach, the fish fillets had disappeared – they obviously didn’t take long to dry in the sun and the wind.

Trepidatious Traveller - camino blog is about preparing for and walking the Camino de Santiago. Many future pilgrims have found the blog useful and inspiring, and many who have no plans to walk the camino have simply enjoyed the dialogue http://www.magwood.me
View all posts by magwood →
This entry was posted in A view of life, Expats in andalucia and tagged Caleta de Velez, dried fish, el Camarote, Expats in Andalucia, photo opportunity. Bookmark the permalink.

5 Responses to Hung out to dry