Cuevas Bajas seemed to be a nice town with some substantial period buildings. The key to the albergue is held in Bar Toni which is opposite the church and the albergue is just around the corner. We had a drink and a tapa In the bar, for which we each paid 1.20€ and then found a pizza place which was teaming with dozens of children making the noise that only spanish children excell at. It was deafening, but we managed to put up with it for the time it took me to eat a very tasty chicken bocadillo accompanied by a glass of wine for a total of 4.50€, so I came in under my meagre budget.

I shall begin to give a bit of directional information if I think it will be useful to anyone considering this route.

When we left this morning it was not very obvious which direction we should take, so for anyone following us on this route – standing with the church on your left and Bar Toni on your right, turn left onto calle Real and continue to the bottom of the road where you turn right onto a country road. Keep on this road and you will eventually see an arrow – after this the signsge is good. We did though manage to get mixed up in the next village, Encinas Reales. Just head for the church – there is a rather ambiguous arrow opposite the church but take the small street opposite and you will soon see the next arrow. The trail is generally well marked and and is mostly on drivable track and some side roads.

After putting down my book at around 23:00 last night, I woke at 01:00 am, the same time that I had woken and stayed awake the night before, so was thinking that I would have another sleepless night. But the next thing I knew, it was 07:45 and I had slept right through. Wonderful! Poor George was all packed and ready to go, but hadn’t woken me. I’m not sure that I would be so patient.

So a rather leisurely start and after returning the key to the bar we were off and away under blue sky and sunshine – just what the doctor ordered. Shortly after leaving the town there was a very, very steep incline, which was followed by many others over the course of the day.

We reached the only village on this route at about 6 km, all of which had been walked on quiet roads and stopped for a coffee. And I actually ordered a coffee. For those that have not discovered this ?interesting? fact from previous posts – I don’t drink coffee, it makes me feel queasy, and I have always blamed it on the milk that is used. My hot drink of choice is hot water, just that, no tea bag, or lemon, or sugar. Just hot water – which you might think would be easy to obtain. But believe me it isn’t. Bar tenders think I am mad, and always need some persuading that just plain hot water is actually what I want.

Yesterday I had a eurika moment. I decided to ask for cafe descafinado, which I expected to arrive as a glass of hot water and an individual pack of nescaf. But what I actually got was a cup of hot milk and the nescaf. So I gave it a try and actually enjoyed it – with no after effects of queasiness or indigestion. So it seems I was misjudging the milk and it is the espresso that has been the villain all this time. So now, when I take a coffee break I can actually take a coffee. Who would have known there was such an easy solution to my dilemma.

We had a little difficulty leaving this village as explained above but were soon on our way through yet more olive groves, again as far as the eye could see.

We came to a point where s stream was washing over the concrete track. George hoiked up his trousers and waded across and I could see that I didn’t want to follow suit – it was much too deep, as in four or five inches and quite wide. After pondering for a while I decided to take off my boots and don my crocs for the crossing. This sounds like a quick and easy solution but actually involved

There were more climbs through more olive groves. Geogre was suffering a bit with the heat and the elevation and I had gained a lot of distance listening to my camino playlist, all tracks carefully chosen to bring some life to my legs. So after a while I took a break in the shade of an olive tree and ate a warm mandarin and some nuts, and waited for G to appear at which point he collapsed on the ground and didn’t move for about 15 minutes.

Note the change in colour of the earth in the distant hills, and yet it seemed to be no time until I was walking through that same area

The sun was quite hot for a few hours and then hid behind some could for a while. A lot of the time there was a lovely gentle cooling breeze but the effort of tackling so many hills put a strain on my water supply. I have two 750 ml bottles and I was rationing myself on the last few drops when I saw a guy unlocking a gate up ahead. I called to him for a refill and he happily obliged. I am drinking a lot more regularly with my new hydration system, and I am very pleased with it. But tomorrow I think I will buy another small refill bottle.

We passed a very few properties and I had a chat to a lovely old toothless lady and we eventually made it to the outskirts of Lucena, a sizeable town/city. Our guide papers told us that there was an albergue ‘under construction’ which I assumed (silly) would now be a nice shiny new facility. Needless to say, there was no such shiny building. A very kind man stopped ask me how many kilometres there were between malaga and santiago and I asked for his assistance. After consulting with a guy from the townhall we were advised to get our credencials stamped at the tourist information office and find a hostel to stay in, which we duly did.

It seems a nonsense that every little village and town we have passed have all gone to the effort to provide albergue facilities, but a rich and thriving city hasn’t bothered.

So now I have blown today’s budget by having to pay 22.50€ for a bed for the night. Just one of those things.

Distance according to – wikiloc (my own recording this time) 29.62 km, mapmywalk 31.86 km. From now on, if I am successful in recording the full day’s walk on wikiloc (not always the case as it sometimes cuts out for some reason) I will use this figure which I feel might be more reliable. Fitbit recorded steps 38,353 – I am now keeping the Fitbit in my waist pocket rather than on my wrist for two reasons (1) it catches on the pack strap and makes it even more awkward to put on my pack, and (2) it occurs to me that when walking down hill I only swing my arm every other stride so it might not be very accurate. 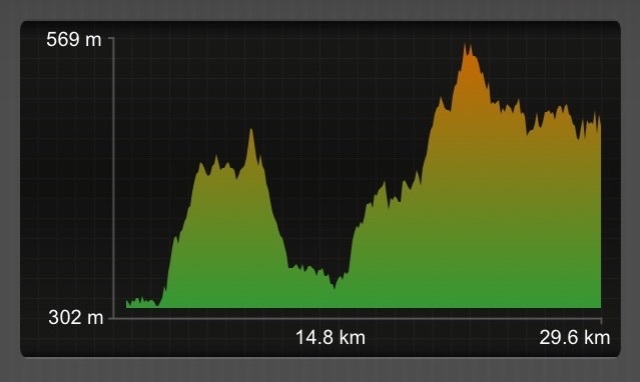