I forgot to mention the beautiful decoratively painted walls in the church of Santiago – quite amazing.

A bit more about yesterday…The rooms around the albergue courtyard seemed to be used as an advice / social centre and there was lots of coming and going as we left for supper. Then George returned whilst I went to find wifi to post my blog, with the arrangement that he would obviously leave the huge iron gate to the courtyard unlocked for me. Well, there must have been someone still in one of the rooms after George returned, and when they left they locked the gate, so that when I got back to the albergue I was locked out. Now, although the rooms we were using were close to the gate, the door was pulled to and George is quite deaf. I bellowed out his name, not thinking for a second that he would hear me, if he was even awake. I have to say I was nervously weighing up my options when thank goodness he came to let me in – phew!

I had a terrible night, not necessarily because of George’s fairly persistent snoring – I just didn’t sleep for more than a couple of hours, and spent most of the night reading and writing. But luckily I don’t seem to have suffered too much from it today.

We set off at 07:50 and left Antequera on a level path and we stayed walking on the flat for a good two thirds of the day. And at least 50% of this section was on quiet country roads, the rest being on dirt tracks! all of which was trailing through olive groves. There are olive trees for as far as the eye can see in all directions. 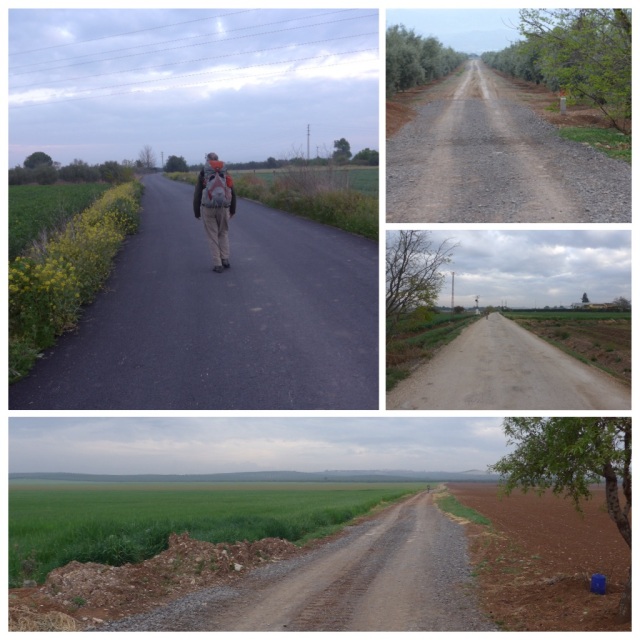 We actually passed through a couple of small towns today, first Cartaojal and then Villanueva de Algaidas, both of which may have had hidden charms, but if so they were very well concealed. We had a coffee in the first town and a cold drink in the second. The kind barman brought us a couple of complimentary tapas but George didn’t want his so I scoffed the lot! We had now covered around 25 km and had kept up an incredible pace of around 6 km per hour.

Because of our short day yesterday and awkward distances tomorrow we had made the decision to walk on to the next town of Cuevas Bajas a further 11 km – making a total walk of about 36 km. 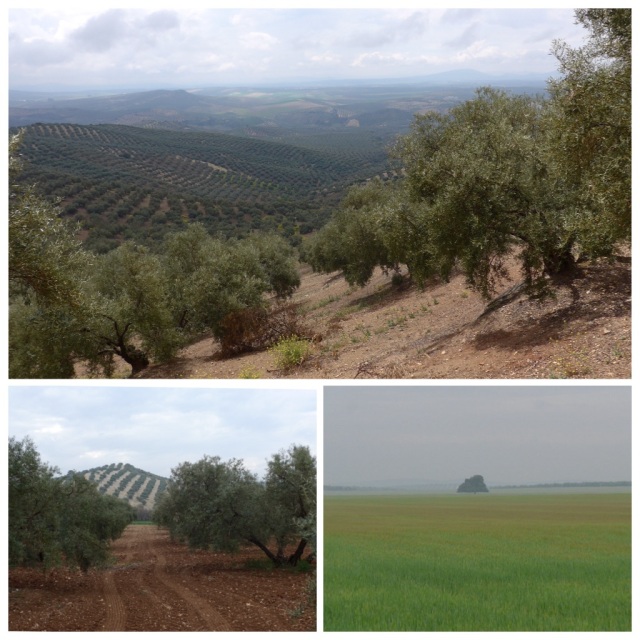 I think both of us are suffering a bit with aches and sore feet after such a long walk. I stopped on the last stretch because I thought I might be getting a blister on the ball of my foot, so I de-booted and placed some ‘hiker’s wool’ where it was feeling tender and hey presto all was well when I arrived. Yet, though it was a hard day, it puts us in a good position to set off tomorrow, and as a bonus there is a friendly bar opposite the albergue with a good wifi signal.

The weather today returned to dull and cool – I don’t know what’s going on with this spanish weather – where is all the sunshine? Although to be honest it has been pretty perfect walking conditions, except when it rained for a while on our final stage and the lovely firm dirt track that we were walking on instantly turned to clay and clogged our boots up again. Added to that, the terrain was now steeply rising for km after km, and then equally steeply descending for the rest of the way. So it wasn’t all plain sailing!

The signage has not been great again today. The were several places where we had no idea if we were on the right track. There is not really any need for the great frequency of arrows that we found during the first two days’ walk, but a reassuring splash of yellow every kilometre or so would have been appreciated today, and yesterday for that matter. The latter part of the track today shared the GR249 route that meanders through the white villages of the Axarquia region of Málaga province and passes through our local villages of Cómpeta and Canillas de Albaida.

The albergue here is really posh – shiny marble and newly decorated. Three sets of bunks, and a couple of sofas and a nice kitchen area. Another hot shower has been taken. The only let down is that there are no heaters so our clothes probably won’t get dry. Because of this I only washed the muddy zip-off section of my walking trousers today – I shall have to recycle the rest of my walking clothes for tomorrow – lucky it was cool today and not too much glowing took place (as in ladies glow, men perspire and animals sweat).

I think this evening I shall only have two or three tapas for supper, so that will restrict the cost to less than 5€, plus maybe 3€ more for a couple of vinos. This morning I had a coffee @1€, a fizzy drink @ 1.50€ and when we arrived here a tinto verano @ 1.25. With a donation to the albergue of 7€ that will make a daily total of 11.25€. To be honest, keeping track of my expenditure has made me want to restrict it. I still have nibbling supplies for tomorrow so don’t need to restock.
Four days total spend 86.20€

If George leaves the bar before me this evening I will escort him to the door and take the key back with me – I most definitely don’t want to be locked out again.