I was rather annoyed last night at the way the hostel owner charged us for food. I guess he was trying to make up for giving us a discount on the accommodation. I ate a really good menu del dia at lunchtime for 9€. I didn’t really need anything in the evening, but just to keep George company I ordered a bowl of soup. When I got the bill I found that he had charged me another 9€ for my evening meal. I challenged the price and he changed it to 7€ for a ‘half menu’. The price included drinks, but nevertheless I considered it to be taking advantage. So if you stay in the hostel ‘Casa Jose’ firstly try to negotiate him down from 20€ per night to 15€ and then be aware that the only option for food is the menu – not individual dishes. There are other bars next door and across the road. Having said that, he was a very congenial host and the food was excellent.

I mentioned in yesterday’s post the thunderstorm in the afternoon. Well, that wasn’t the only one – there was thunder and torrential rain on and off during the evening and most of the night. We had already discussed the possibility of not walking cross country because of the likelihood of treacherous mud and difficult or impossible to pass collections of water on the track, and the hostel owner confirmed that it would indeed be a difficult trek after so much rain. So we reluctantly decided to walk on the road all the way to Córdoba.

The three german pilgrims were also staying at Casa Jose and apparently two of them had decided to take the cross country route, and the third took the bus! If we meet them again, it will be interesting to find out what the track was like. 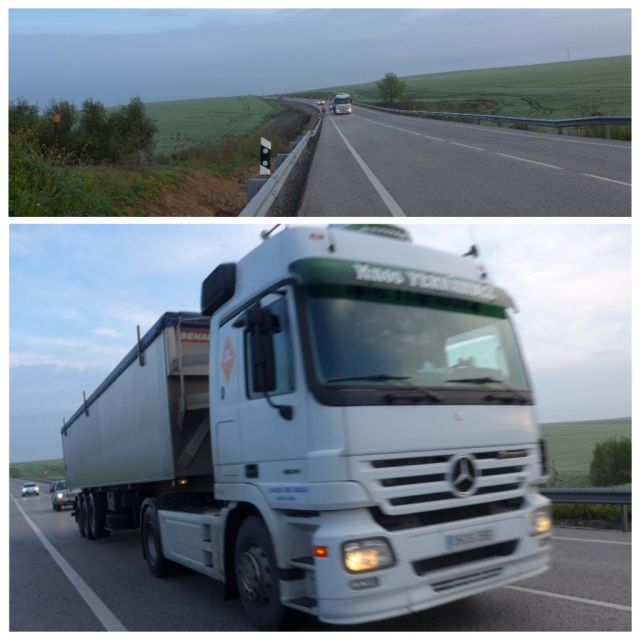 The N432 is a busy road with lots of heavy speeding traffic. There is however a decent shoulder to walk on, but it still felt A bit threatening at times. Most of the drivers were courteous and pulled over where possible. I noticed that almost all drivers would make eye contact when passing and I made sure to give a nod of thanks to all those who pulled over. We got a few beeps from people – not sure if they were wishing us well of wondering what the hell we were doing walking on such a busy road. Almost without fail, the guys who waved out were driving gruas (rescue trucks) or highway maintenance vehicles. 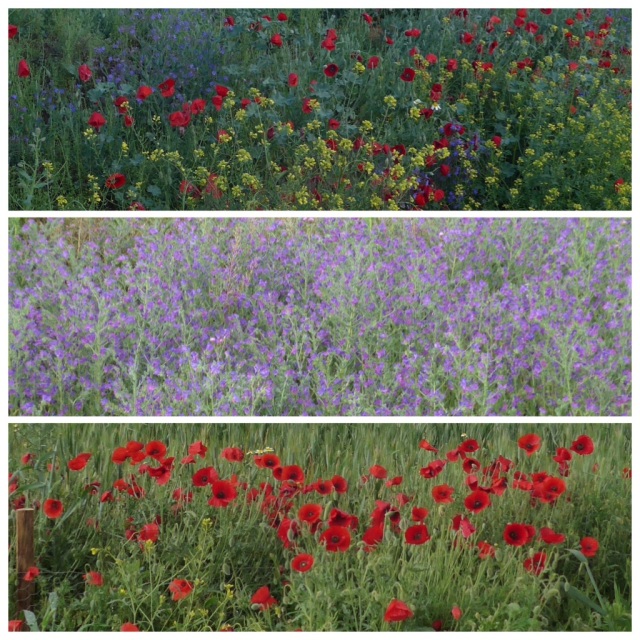 At last we have left the olive groves behind. A couple of weeks ago I couldn’t imagine being bored by olive trees, but after traipsing through them for days on end, I am glad to have a change of scene. Yesterday I noticed several fields of small young plants that I didn’t immediately recognise and thought they might be some type of green beans, but George recognised them as sunflowers. I passed many more fields of them today, still only a few inches tall. It is a shame that, as a spring walker, I shall not see them in their prime. I e only seen them in photos, and they always look so glorious in full bloom turning their heads to the sun. I shall have to take a trip to this area later in the year so that I can see them at their best (but not a walking trip!) 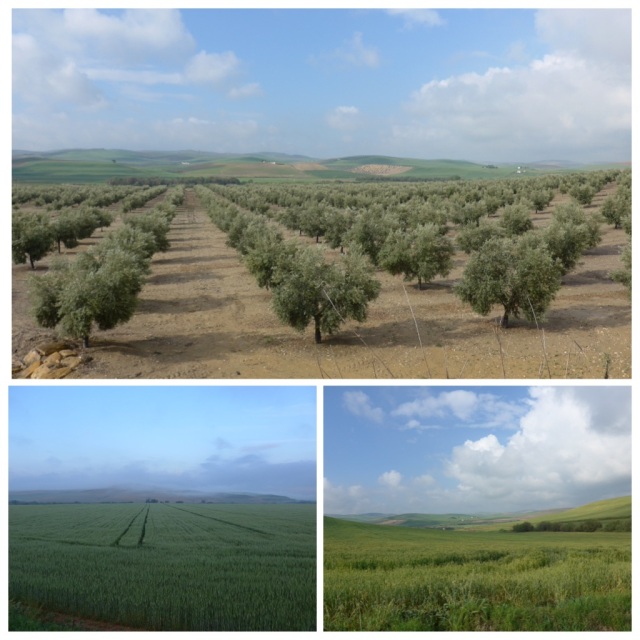 We took the opportunity to stop for a break at the only possible places along the road, a disused train station and a picnic lay-by. At the time of our second break after 17.5 km we could just see Córdoba in the far distance, and just after we set off on our last leg the rain came pelting down again, but luckily not for long. Crossing the network of roads into Córdoba was a bit of a nightmare, but at least the traffic was now moving fairly slowly and it was not too dodgy. 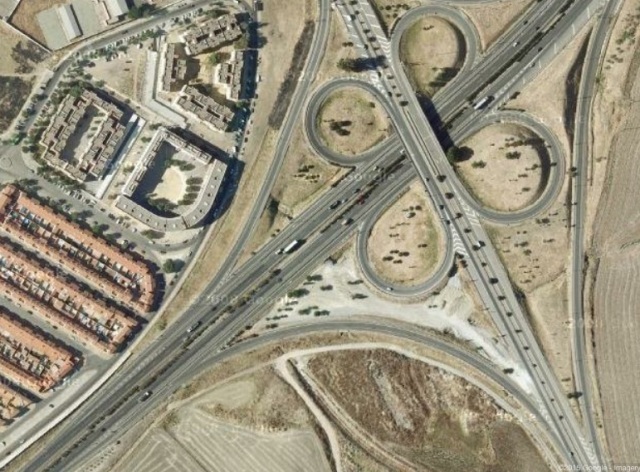 There was no industrial area to slog through, we were straight into the suburbs for a couple of kilometres and then towards the city centre. We found the youth hostel that our notes suggested right in the heart of the city, between the castle and the Mesquita.

We were each allocated a same sex shared room and I was expecting to find a dorm with 6 or more beds, but hurrah I have a twin room with shower and, so far, no room mate. I was surprised at the cost of 20€. The only other youth hostel I have stayed in was last year in Lisbon and I think I paid 12€ then. I also had to take a cold shower, which didn’t bring much cheer. The hostal is situated in a lovely building with large courtyards, so I guess I shouldn’t complain.

We found a reasonably priced menu for lunch and then visited the Mezquita. What a stunning place. I have visited Córdoba before, for a long weekend a few years ago and love the city. The old quarter is full of charm and very compact. A lovely place to spend a few days. 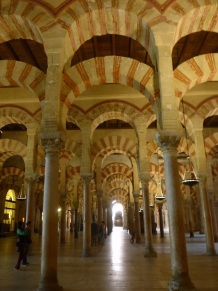 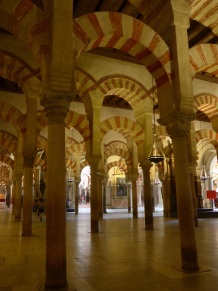 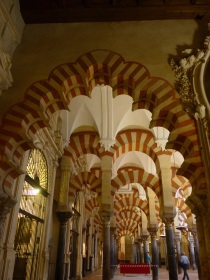 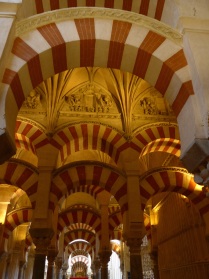 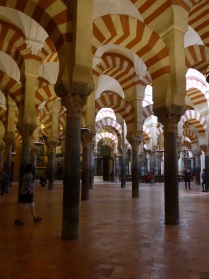 After the Mezquita I wandered around on my own for a while and found the information office to ask for a map so that we can work out our route for the morning. There is a church of Santiago where we should stop to get a stamp for our credencials, but it is quite a way from the centre, and on the route out of the city, so we will hope that it is open in the morning when we pass. 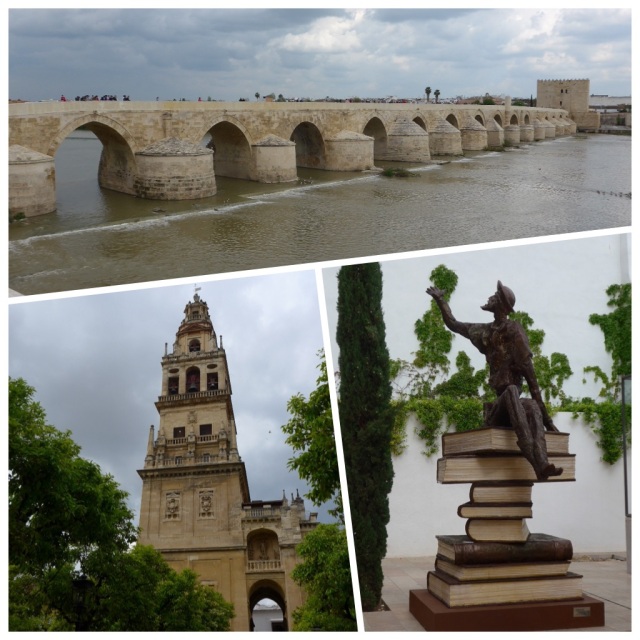 We are planning a short day tomorrow with a stay in some highly recommended accommodation, and I have just remembered that breakfast is included in the price of the youth hostal (so maybe not so expensive after all), so we will have a leisurely start in the morning with the hope that the ground will have dried out a bit by then – keep your fingers crossed for us. 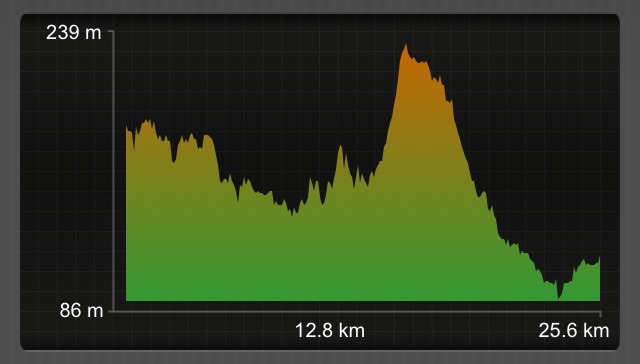