The scene of my successful attempt at finding wifi yesterday took place in restaurant/bar El Roble. Half way through my stay the landlady came over and put her phone in my hand, so that I could speak to some English speaking enquirers. As a prize for sorting out their reservation she refused payment for my wine – so now I am a paid translator!

By the time I returned to the Albergue there had arrived a total of six cyclists, all Italian I think, and a young German lad on foot. Also joining us were Alke and Patrick and a spanish guy who was there when we arrived, making the man:woman ratio 12:2. So we were fourteen for dinner, which consisted of noodle soup, a meat based paella and fruit, followed up with fire water. It was all very pleasant and after dinner José the hospitalero of this donativo Albergue handed around a box from which each of us took a lucky dip of a sentiment written on a card – mine is shown below. Very charming. And then we were treated to a recital on the spanish guitar by the spanish guy Tomas, which rounded off the night perfectly. 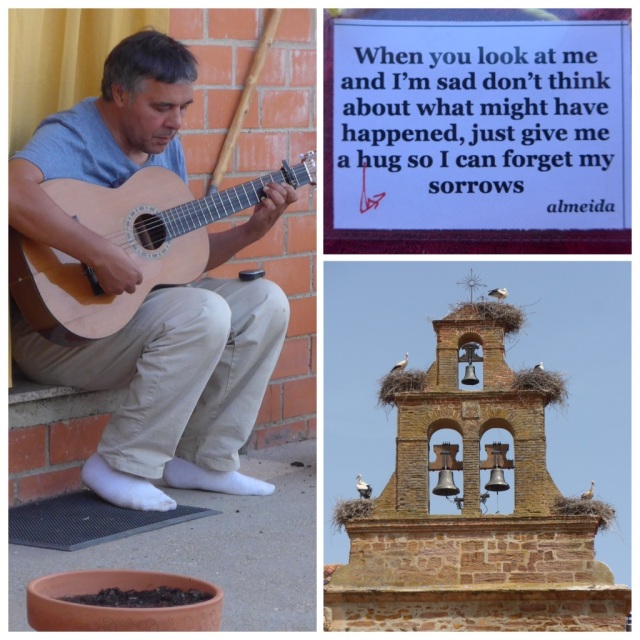 We were all instructed not to set alarms, but that we would be awoken at 06.30 with music and breakfast would be at 07:00. There was a very pleasant atmosphere, even with all the cyclists, who can be a bit over-bearing – but not in this instance.

I set off around 07:00, first of all on a very quiet country road and then once again onto a series wide gravel tracks. There were some wind turbines high above and I waited for the sun to be directly behind one of the blades to take a photo for my great friend Lyn who works in the industry.

A couple of the cyclists passed me with a cheery ‘buen camino’; but it did make me smile when the next couple passed and almost immediately came to a stop when a steep hill presented itself. I was soon walking back past them, and just to rub salt in the wound I stopped at the top of the hill to look down on them and take a photo. 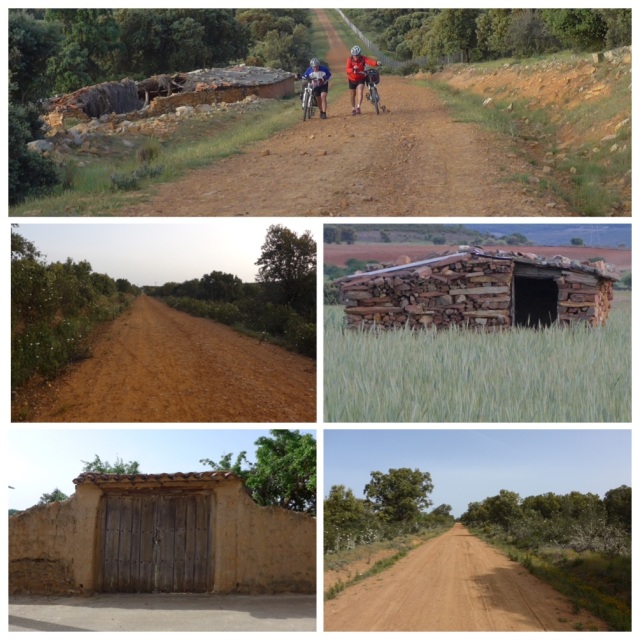 We are seeing a lot of adobe buildings, some still standing and in use, and others like this ruin by the side of the track today. I love the look and texture of these structures – amazing how a bit of mud mixed with stones and straw can stand the test of time. 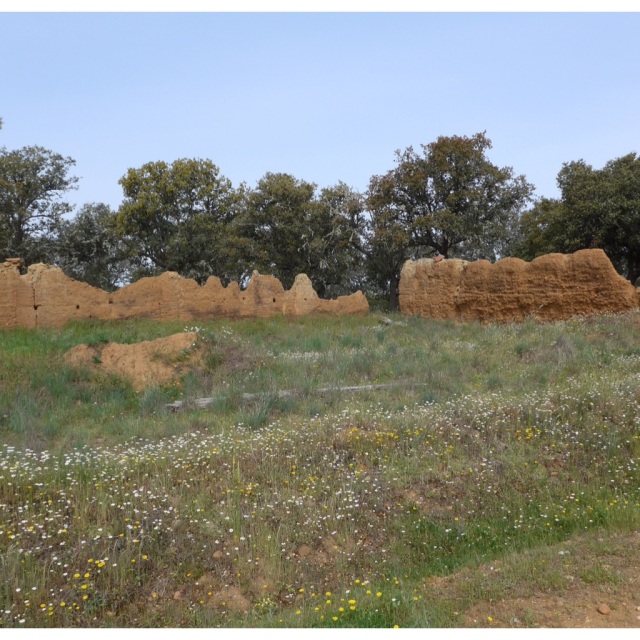 It was a fairly unremarkable day, albeit with some pretty flowers lining the path at times. 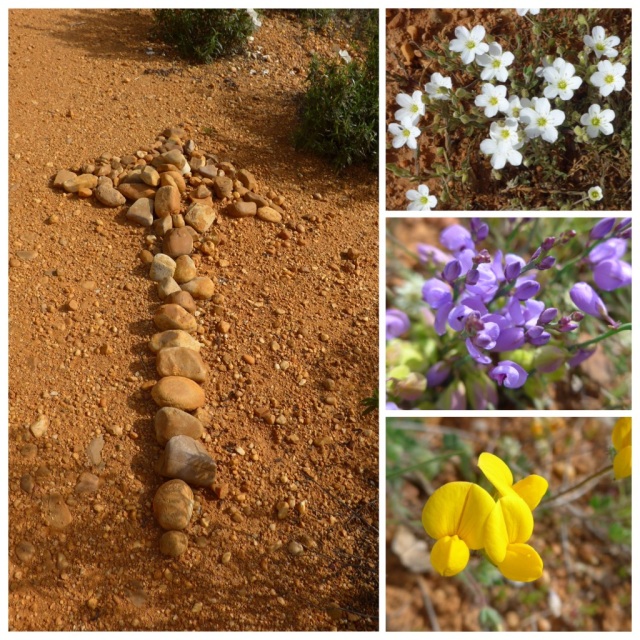 I had it in mind to walk around 35 km today, but when there was mention of a very lovely Albergue with wifi, dinner, pretty garden and clean sheets at 22 km, I was instantly lured in and stopped off at this point without a second thought. The day had promised great heat, but shortly after I stopped walking a brisk breeze and cloudy skies developed – possibly an ideal day to walk a longer distance. But hey, I’m here, and was the first to shower in a freshly cleaned cubicle and have been charmed by the lovely hospitalera sisters here at ‘Casa Anita’. The forecast is for cooler weather over the next few days so I can catch up on lost time along the line.

An update on the shortcut dilemma – I met today with a French guy called Jean-Marc, who also took the shortcut along the highway yesterday. He said he hated it, it was very dangerous and it was a big mistake. So now I am even more pleased that I didn’t take this route.

So far in this Albergue are Paul and me, the German brothers we have seen on and off for a few days (whom I have christened the ‘chuckle brothers’), another German guy (all in their sixties I imagine), a German woman, another middle-aged couple who are new to me and not very communicative and the lovely Alke and Patrick.

I have bought supplies including cava and have swapped some of my alcohol for Paul’s orange juice so that we have enjoyed a couple of Buck’s Fizzes and am now sitting in the garden writing this post. The costs here are 12€ for the bed and 10€ for the menu del dia, so a bit of a budget buster, but worth every centimo!