Today started well with a beautiful sunrise above the estuary at San Vicente. This is the first real sunrise I have witnessed due to tardy starting times. This morning I decided I wouldn’t just lie in bed waiting for others to wake up. I rose shortly after 6 am and took myself to the bathroom with all that I needed to make a leisurely start to the day. I didn’t partake of the included breakfast as I don’t really like to eat early in the morning, but I did help myself to a cup of hot water before wandering out to inspect the sunrise.

On leaving the albergue I stated to no-one in particular that today would be the day that my feet wouldn’t hurt (not really believing it, but ever-hopeful).

The hospitalero had suggested an alternative exit from the town which entails leaving via the small bridge over the estuary and schlepping along the N634 for untold km’s rather than the ‘official’ route on a smaller winding road that is considered more dangerous (and around 5 km longer). At least the N634 has a wide shoulder and not much traffic as there is a motorway nearby. The countryside was lovely – expansive rolling green hills with the snowy mountains in the background and the distance was covered quite quickly. 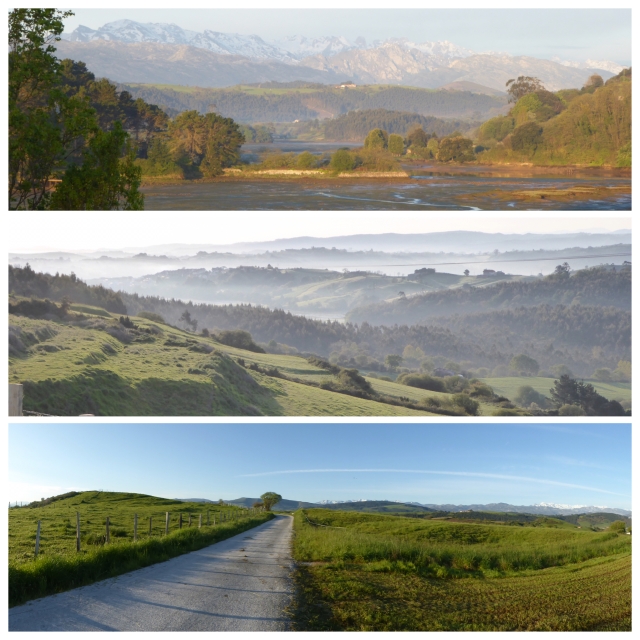 The aroma emanating from a roadside cafeteria drew me in to sample the wares and I purchased a hot chocolate and a tortilla bocadillo. Once I had drunk the hot chocolate I was completely full and saved the bocadillo for later.

Then it was back on the road until 9km had been covered, at which point I was invited to divert onto a track through some woodland. It was quite charming, and I was inspired to start singing ‘Teddy Bears’ picnic’…

For every bear that ever there was
Will gather there for certain,
Because today’s the day the
Teddy Bears have their picnic.

I’m never far away from a childhood song – my father would constantly break into song, particularly when we were driving somewhere in the car. There are always certain triggers that will send me off, either discretely in my head or, more often, embarrassingly out loud. Just as I came to the end of the nursery rhyme there came to me another delicious aroma of sweet cakes – in the middle of the woods? How could that be? Were the wood nymphs preparing for the picnic? As I was puzzling this strange turn of events, the track emerged alongside the railway line and on the other side was an industrial area. There must have been a cake factory sparking my imagination. But I enjoyed the illusion whilst it lasted. The woodland track only continued for around one kilometre but it was nevertheless a great relief from pounding the highway.

Not many pretty villages today, but a couple of sizeable towns and then a steep climb out of Unquera, where there was an adventure playground inhabited by goats. A young kid (the four legged variety) had managed to climb up onto a high platform, but was then stranded and calling for his mum to help.

The next relief from the road came at 14 km, but again for only around one kilometre. 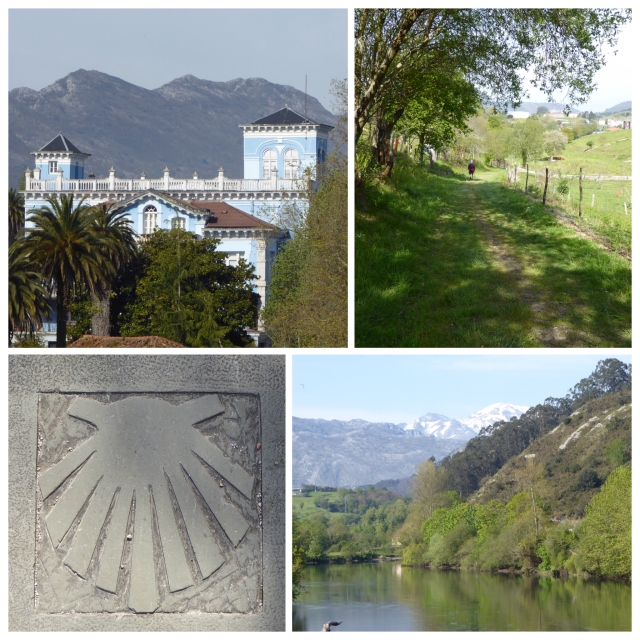 At 19.5 km my guide explained that there was a diversion to be followed. If you are planning to walk this route, be sure to follow this short diversion that will take you from a gravel track back onto the main road, but only for a moment until you see painted on the road a sign to cross over for the coastal route. Cross the railway line, over the first of many stiles, and YAY…moorland trail all along the coast.

What a difference a few metres can make. Hard slog one moment and absolute joy the next. Flower speckled green pasture to walk over, with a backdrop of the azure ocean. I was so very happy. It is amazing how my spirits are lifted by my surroundings. 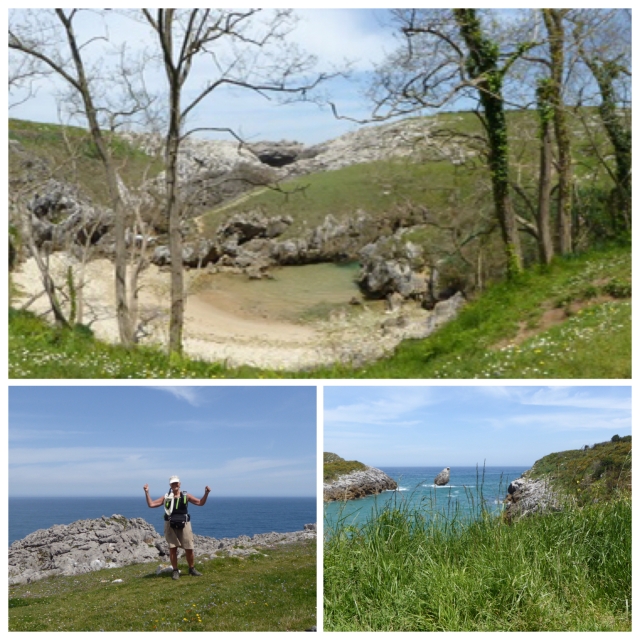 By this time I was walking with Gunter and we picked our way through the rocky fields, occasionally peering over the cliff edge at the waves pounding onto the sheer rocks far below. We made our way past herds of cows standing at the very edge of the cliff, and by interesting rock formations jutting out of the ocean. At one point we considered whether we should attempt to pass a high rocky ridge that straddled two bays, but Gunter showed great good sense in suggesting that it might not be the best idea to risk our lives on that particular adventure. There was a beautiful little cove on the inland side of these rocks where the sea had found its way through caves to blow up into the cove. And a little further we came across an incredible cave, full of stalagmites. This little adventure spanned only around five km’s but as progress was slow due to the terrain and the fact that we kept stopping to admire new wonders, it actually took us a long time.

It was another hot sunny day today, albeit with a cooling breeze during the afternoon. As the day wears on I am having to wear my long buff over the back of my neck to stop it burning, and the top of my left ear is rather pinker than the right one. The sun starts at our backs, but obviously moves around during the day and concentrates on the left side as the day progresses. Where I have been squinting against the sun, I have some very attractive (not) white lines in the creases around my eyes. What with the ankle tan lines and the t-shirt marks, I am building quite a look.

We reached the donativo albergue at Pendueles mid afternoon. There are sixteen beds, two bathrooms, communal dinner made by the hospitaleros – two Sicilian brothers – and they have done everyone’s washing for them. What stars!

Pendueles is a very small village without many facilities, although there are two or three bars and a small mini market.

We are a small group of seven here today. Five Germans, one Dutch and me. Not sure where the usual crowd have ended up.

My feet acted as I predicted and didn’t hurt all day, other than the ache that comes from all the pavement walking, so I am very pleased about that.

Rain is forecast for tomorrow – let’s hope they’ve got it wrong again.