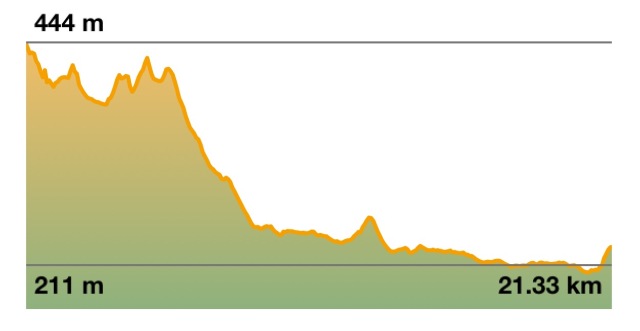 There was another misty start to the day and the air felt damp. We stop at a cafe for breakfast but they haven’t yet received their bread delivery so tostada con tomate is off the menu. 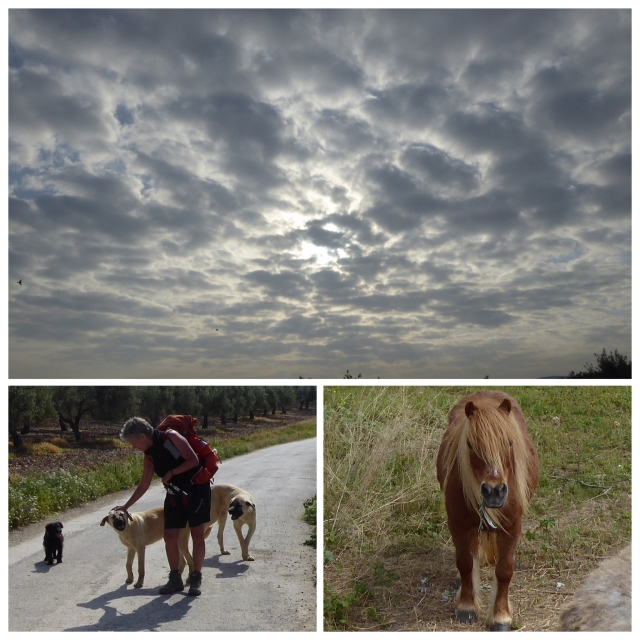 We leave town on a busy road with no shoulder and after about 1.5 km we turn onto a dirt track through more olive groves. It’s a rough stone track and not very comfortable to walk on and at 7 km we return to a very quiet asphalt road, and there we stayed until reaching our destination, so 14 km straight road walking.

I am now covering ground that I have already walked in 2015. Baena is where the Mozárabe routes from Almeria and Málaga meet. A few landmarks seem familiar, but I don’t recall such a long walk on the road.

This Camino is becoming very different from how I expected. When I walked from Málaga in 2015 we saw only three other pilgrims one day in all eighteen days we were walking between Málaga and Merida. Whereas now we are in a bubble of more than 15 on each stage. Some are staying in private accommodation which lightens the load on the albergues, but at tomorrow’s stage end there are no beds available in the two hostels in town and there isn’t an albergue. I’m not quite sure how to handle that problem, but I have a plan that I may put into action. And then at the end of the following stage to Córdoba we run into mayday weekend and there are virtually no beds available in the city, although I luckily managed to reserve three spaces in a hostel.

After Córdoba there are six further stages until I take a right turn and leave the Mozárabe, and I am sure I won’t see many other pilgrims on that route.

While Nina and I are taking a five minute break under the shade of a tree I look up and see a huge group of pilgrims walking towards us. Oh no! Not more to share the albergues with. They tripped spritely past us and I saw that they were all just carrying dolly day bags, and I assumed they were just day walkers. But no, when I caught up with a couple and engaged in conversation I learned that they were a group of nine ‘posh pilgrims’ probably rather like those taking part in the recent TV series, being ferried in a shiny mini-bus and then walking into the next town, picked up and taken somewhere luxurious to spend the night. They were nine women of various ages from California and were accompanied by THREE guides. The two who I spoke to were very pleasant and it’s good that the local economy can benefit from the camino phenomenon – they must be contributing a lot more per head than I do! 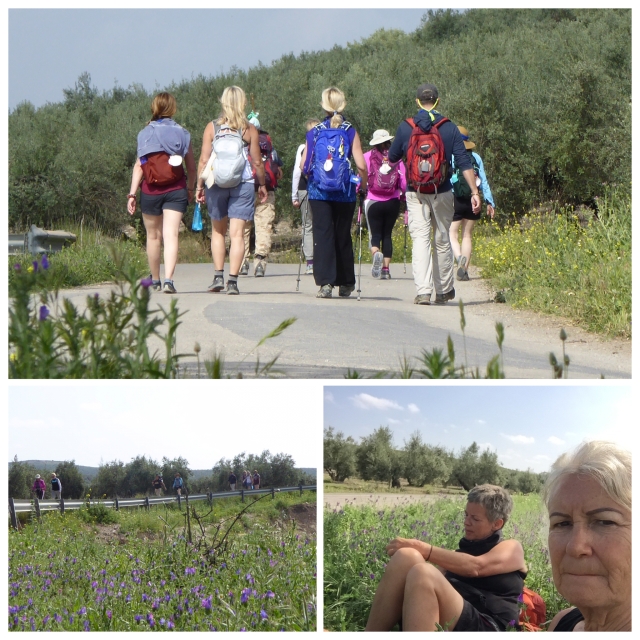 I did mention to the ladies (as all of their three guides should have done) that rather than spreading themselves right across the road and dividing to left and right when vehicles came into sight, they should actually all be walking on the left, towards oncoming traffic. If there are people on both sides of the road it’s a nightmare for drivers to have to weave around them. They took my words in good stead and immediately told the rest of their party to follow the rules. 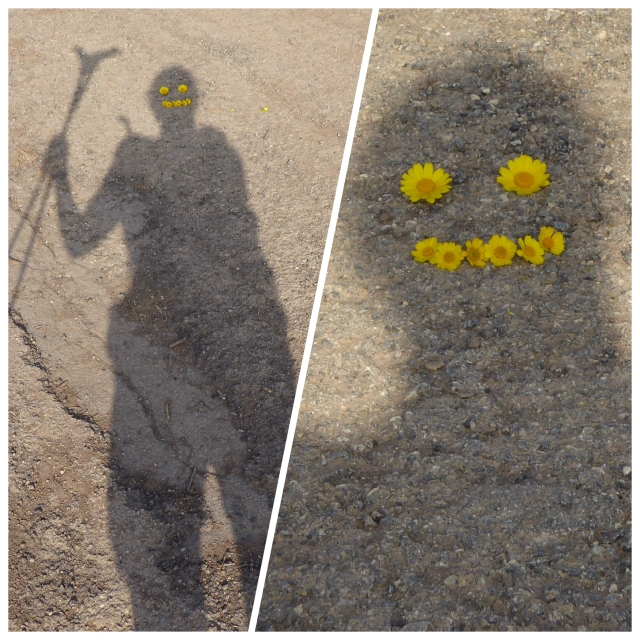 We actually had a brief break from the olive trees today when we passed some lush green crop fields, but they were back soon enough. I can’t normally imagine being bored with olive trees, but after a week or so it’s good to get a different view. 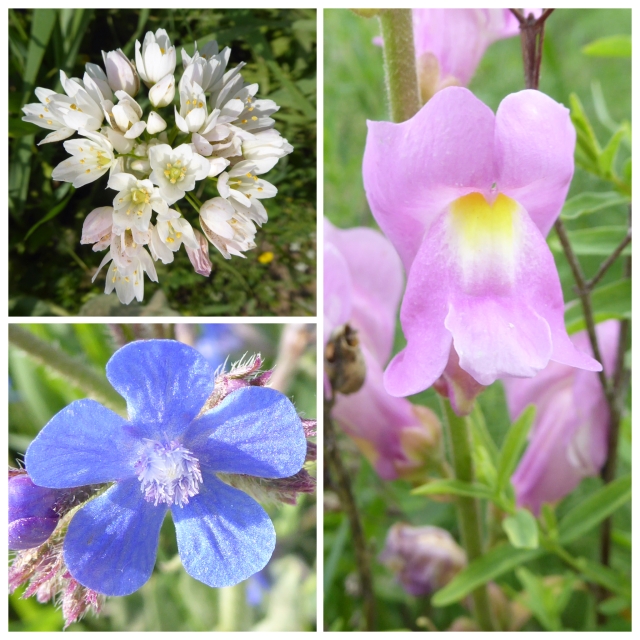 The albergue tonight is rather basic, with twelve places over six bunks. I think there are eight of us here. There are no kitchen facilities whatsoever although there is a nice room where you can eat any food that you have found elsewhere. The bathroom leaves something to be desired! It is necessary to register with the Policia local situated in the Ayuntamiento. I have a note that the cost is 5 euros, but wasn’t asked for any money and there is no donation box at the albergue.

I have been invited to attend the opening of an exhibition taking place in the town, organised by Michel Cerdan who is very involved with the Camino Mozárabe. I took a peak earlier. It is a collection of stones picked up by pilgrims along the camino and they are hung from threads at the corresponding distance and height that they were found. I contributed a tiny shiny stone that took my fancy yesterday, but it looks rather underwhelming amongst the much bigger rocks already hanging. But every little helps, so they say! 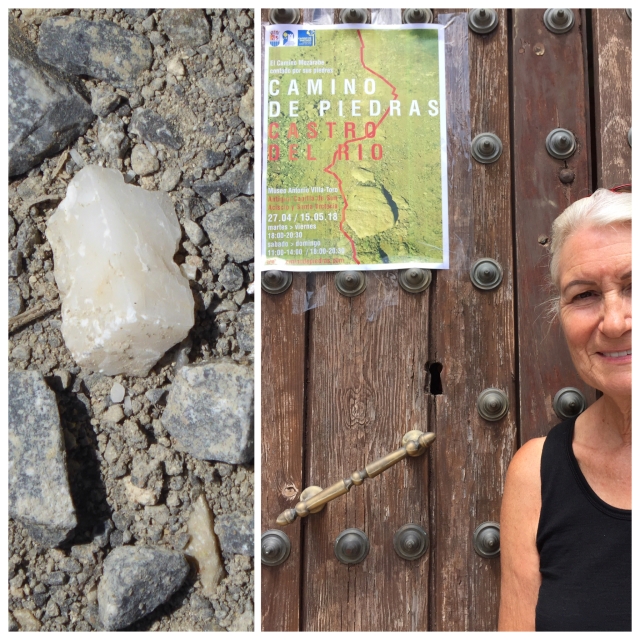