So, today we have a boat trip up the Rios Arousa and Ulla and then a walk into Santiago.

We wake early even though we can’t leave town until the boat arrives at 10:00. The day starts bright and sunny but storms are forecast for later. We make the most of the sun on our backs whilst it lasts. Nina and I take a stroll around the fishing port and the marina and look out over the mussel farms to the bay beyond.

When it arrives I am a little taken aback by the small size of the boat compared to the large number of pilgrims waiting to embark. 19 of us plus two crew squeeze onto what I would call a rubber dingy, but am reliably informed is called a rib (rigid inflatable boat), completely open, no safety drill or information about where to find life jackets. By the time we set off, the sun has disappeared behind the clouds and travelling at 15 knots in the open estuary is rather chilly. So in addition to my fleece and rain jacket I fish in my pack for buff for head and neck, scarf over my knees and gloves. El Capitan stops the boat to give us some information about the mussel beds, apparantly this is the largest production site in Spain, smaller mussels are sent to France and Italy whilst the spanish prefer more muscular molluscs. 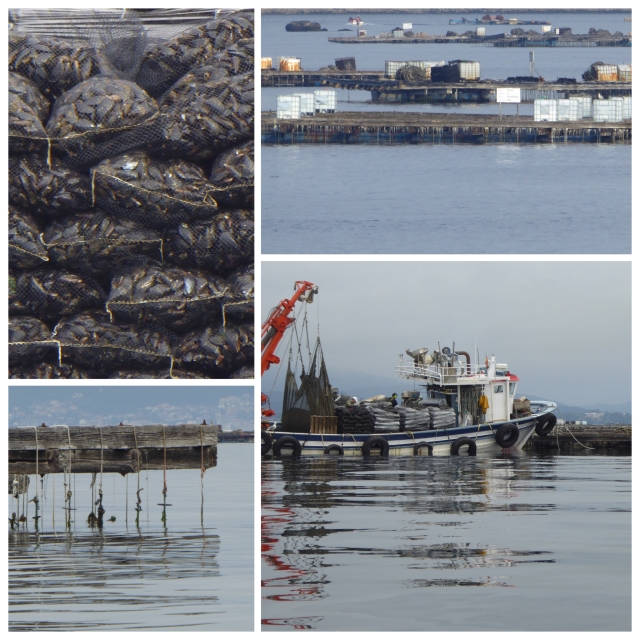 We have another pit stop where the Rio Arousa becomes the Rio Ulla at a small island where three crosses mark the spot. And yet another when we cross the border from somewhere to somewhere else (sorry I wasn’t listening properly) at which point tea and cake was served. Despite the lack of sun and the chill of the speed, it was a very enjoyable journey for 27 km to the landing point at Puentecesures, through a wide and still waterway passing beautiful scenery with lovely reflections in the water. We also passed small fishing boats where several men on each were standing, vigorously and precariously levering long poles with large nets on the end into the water. I didn’t get to see what was their intended catch, but it was all very colourful and they all waved happily to us as we passed. 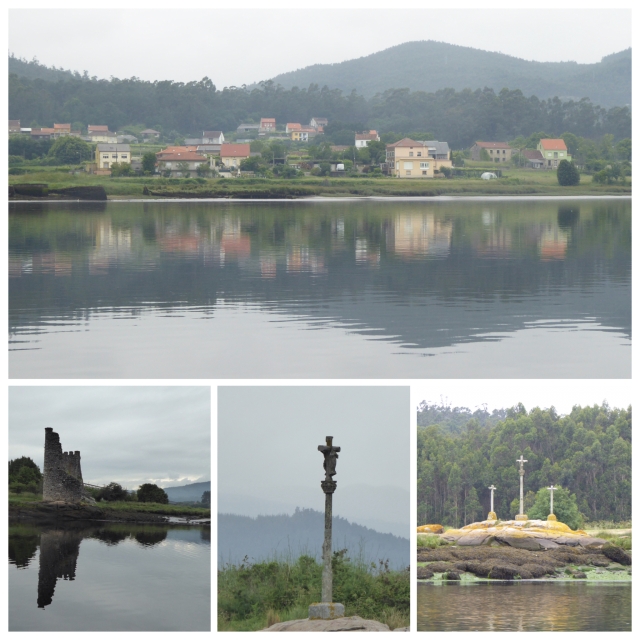 The boat ride couldn’t start until 10:00 because of the tide, I think at different times there may also be an afternoon sailing and there is also a much bigger ferry for when the numbers are greater. The rain desisted during our journey and when we alighted after an hour and ten minutes, we walked the 2 km into Padrón, stopped at the market for some fruit and bread, and visited the church of Santiago where legend has it St James’ body was delivered in a stone boat.

I had walked this last stage between Padrón and Santiago back in 2014 when I had some excellent company. The rain started soon after leaving Padrón so I didn’t take many photos, but if you are interested to read more about this stage you can see my previous post here (some of the route has changed in the meantime).

As we walk through villages I can smell the delicious aromas of lunches being cooked, and although I am certain I wouldn’t be able to eat any of what is being cooked, it doesn’t stop my nose from twitching in appreciation.

In the municipality of Teo a protest was taking place, very restrained and difficult to miss. Rather than ugly banners strung from fences, there were many attention grabbing full sized straw dolls holding signs and messages. We must have seen at least twenty. Very clever.

This stage was mostly on hard surface, but passing through many pretty little villages, as well as a couple of shortish stretches on the horribly busy N-550. Towards the end of the stage there are two options to walk, one taking around 4 km to reach the city and the other taking 7 km. Unsurprisingly we opted for the shorter route, taking the left fork towards and past the hospital

It was still raining as we neared our destination. I had almost reached my goal and walked over 1,400 km from Almería without mishap of any kind when I tripped over something and fell flat on my face (well, not actually on my face thankfully, but I went down completely – sprawled on the wet ground). Luckily Nina was at my side and helped me up (it is no easy feat to get up from the ground with 8 kilos strapped to your back). No harm done, just a grazed knee and a bit of a shock, and on we went, the final few hundred metres to the Cathedral.

We took a few selfies and had a couple of group hugs. Such a shame Marilyn wasn’t there at the finale – we missed her sunny presence. 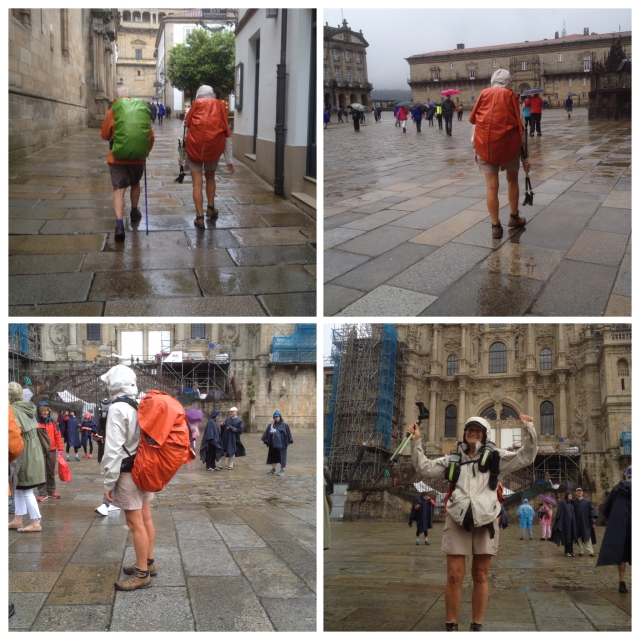 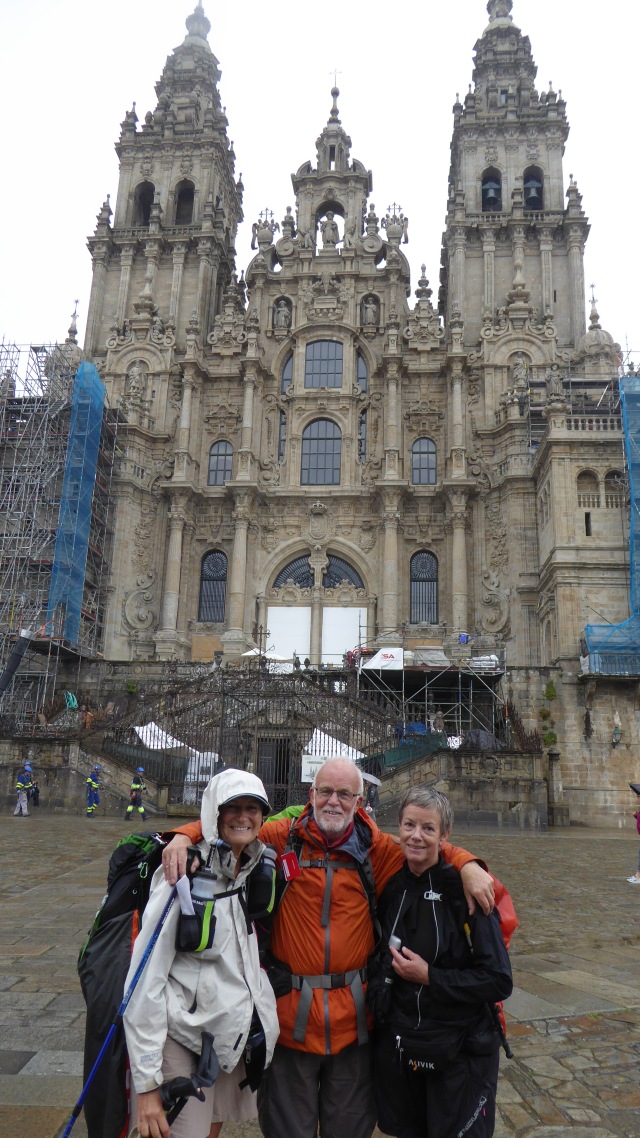 Our late start and boat ride meant that we didn’t arrive until 18:00, but there were plenty of other pilgrims arriving from different directions, from different caminos, all with the same looks of wonder and achievement on their faces – no matter what distance they had walked, the feeling of reaching Praza Obradoiro at the end of your camino cannot be beaten.

Nina and I stayed at the Last Stamp Albergue – central, comfortable, all facilities, including bed linen and duvet, 18€. We met with Paul later for a bar crawl and a bite to eat. 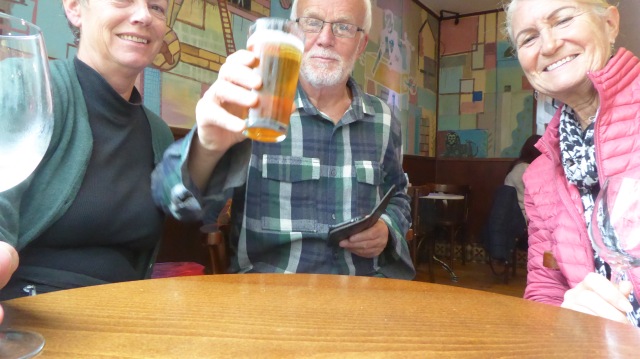 And there it was, done! Another camino completed.

Of those 1,496 km stated at the top of the page, I didn’t walk 75 of them due to illness (not mine) and accommodation difficulties. But I am sure I walked at least another 150 km in addition to the stage lengths, sight-seeing, shopping, just wandering the streets. I shall write another post or two to round off this adventure, so expect a few more mails to arrive in your inbox.

I would like to thank everyone who has commented on and contributed to this camino blog. I appreciate your support so very much and read and relish every word. Over time I will answer any specific questions and if relevant maybe write a post with responses to items of general interest.

A huge THANK YOU to all those who have travelled with me, in person and in spirit.