Well, I hope the mayor of Castuera gets re-elected next month (if indeed there are local elections as in Andalucia). The town has a real ‘cared for’ look about it and they certainly ‘cared for’ we pilgrims exceptionally well.

Today started briefly on the road, but we were soon directed onto wide sandy tracks, where we remained for most of the day. The scenery was similar in parts to recent days, but with a bit more scrubland thrown in, and many of the holm oak meadows had been ploughed ready for a new cereal crop. 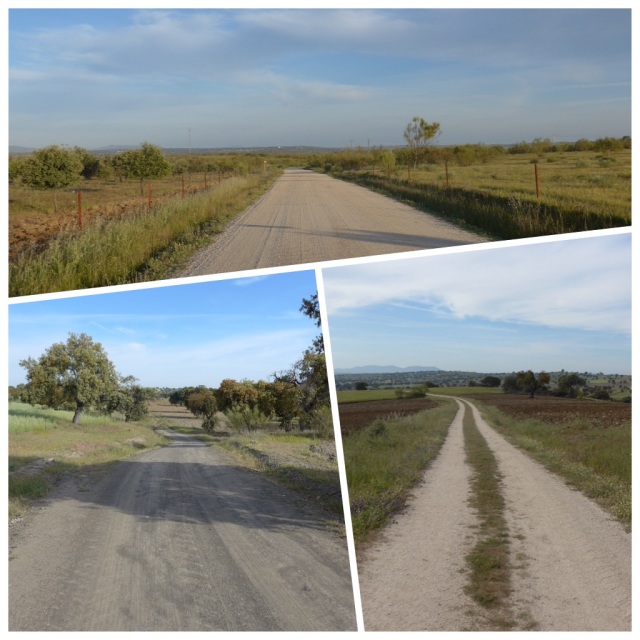 The land hereabouts is full of large granite boulders which must play havoc with the farmers’ ploughing and harvesting regime. Much work has obviously been done in the past to clear the land as here and there are piles of rocks and large stones that have been collected. We took our first break sitting on some of these stones whilst watching three tractors tilling the land. I have a bit of a ‘thing’ for stones, and eyed this pile of flat granite rocks with great interest. They would be perfect in my garden to build the last of my terrace walls – large and flat, just perfect. But I decide I am carrying enough already and reluctantly left all the stones unturned! If you want to see what I do with all the stones I collect, take a look here. 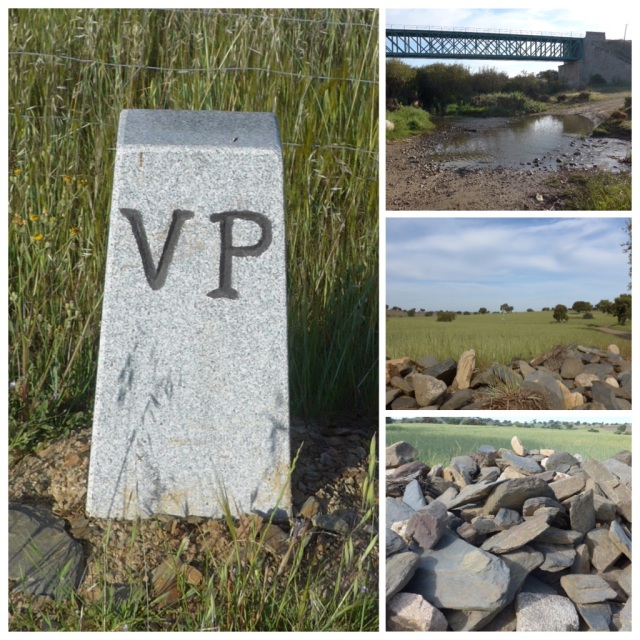 All along the route today there have been granite markers on either side of the track, on which are engraved the letters ‘VP’. Too soon to have anything to do with ‘Via de la Plata’. George thinks they may denote the route of ancient drovers’ paths. Anyone have an idea what they represent? Some of them are within the cereal crops, already below the level of corn – I can’t imagine how the farmers cope at harvest time when they can’t be seen.

We passed a granite quarry where huge chunks of stone were waiting to be cut up for kitchen work tops and floor tiles, but the place was absolutely deserted.

Just one water feature for us today with well placed stepping-stones, so no wading required.

I was excited to see the first fox gloves of this trip and a new flower I haven’t seen before – the most perfect blue. 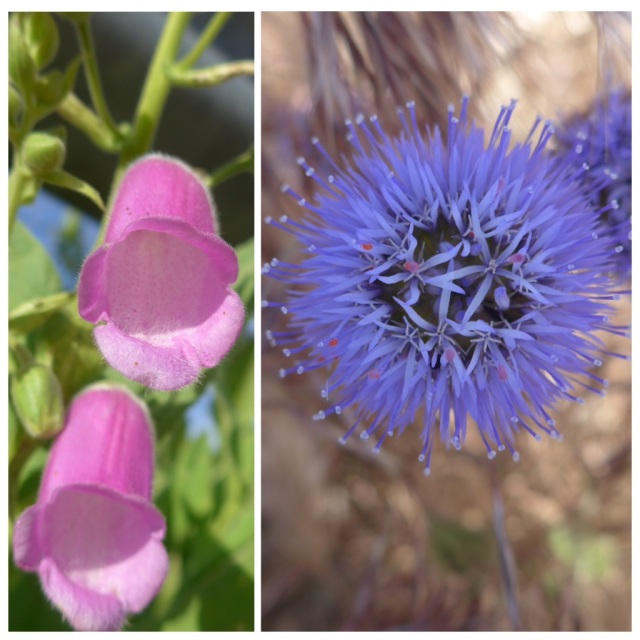 A stork took off in flight quite close as we walked and although I was a bit slow to get out my camera and I could only literally ‘point and shoot’ as I couldn’t see the screen because of the glare – I actually caught a couple of snaps in the far distance. Magnificent to see these birds fly – very sadly (walking towards Córdoba) we saw one victim of a road incident that was not yet dead but would inevitably be so in time – I hope it wasn’t too long for the poor thing. 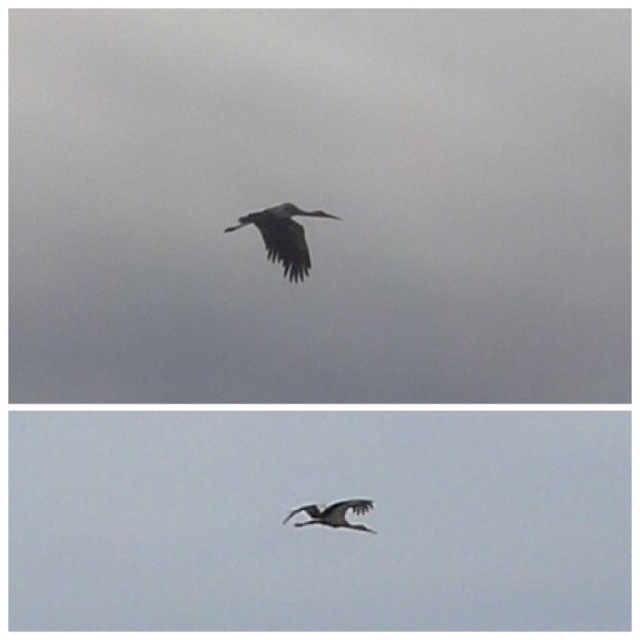 Passing a few properties in a remote area today I noticed a horse on a patch of waste ground with plenty of grass for it to eat. I guessed the poor thing was distressed because it was making repeated movements (like an animal in a zoo) which I haven’t seen a horse doimg before. It was tied just above the hoof of a front leg by a length of rope to a stake in the ground (which is quite normal in Spain) and when I went close I could see that, although a huge barrel of fresh water had been provided, the horse couldn’t reach it to drink. George came over and between us we managed to move it over a bit, and as we walked away we could see the horse lower its head and take a drink. So we’ve done our good deed for the day.

The whole of today’s walk was on smooth drivable track, albeit at the very end of the day alongside a road that led into the town of Campanario. What a difference from yesterday’s welcome. The lady in the townhall told us there was no municipal albergue, but a hostal at the edge of town, a private albergue much further outside the town or the floor of the sports hall. A phone call to the first hostal resulted in a cost of 20€ per person, with a pilgrim discount of 2€, and there was no response to my call to the albergue. I was unhappy to pay so much so I phoned the number for the sports hall, and although I obviously made myself understood the guy at the other end rattled on so fast that I couldn’t make head nor tail of what he said. So we are reluctantly staying in the somewhat seedy (although in fairness very clean) rooms of the hostal Malay which I have the sneaky suspicion are above a ‘lady club’. Hopefully, whatever business is going on down below (!) won’t disturb our sleep tonight.

I have to admit to feeling quite deflated after such a lovely stopover yesterday. However I have discovered that the town provides free wifi in a couple of places, so I have been sitting in a park writing this – a large area that is absolutely deserted apart from me. So in theory I can save myself the cost of a couple of glasses of wine that I would normally spend whilst using the wifi in a bar, to contribute towards the cost of the room. I am actively hoping to keep the number of euros spent below the number of kilometres walked, but with a couple of short days it is becoming a close run thing. However I should be able to reverse the trend when we join the Via de la Plata in just a few days and we can find more municipal albergues. 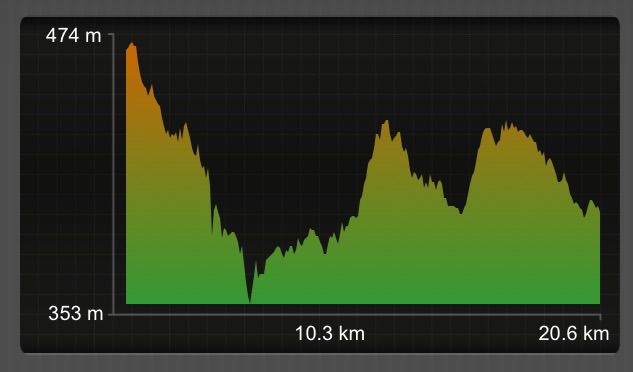