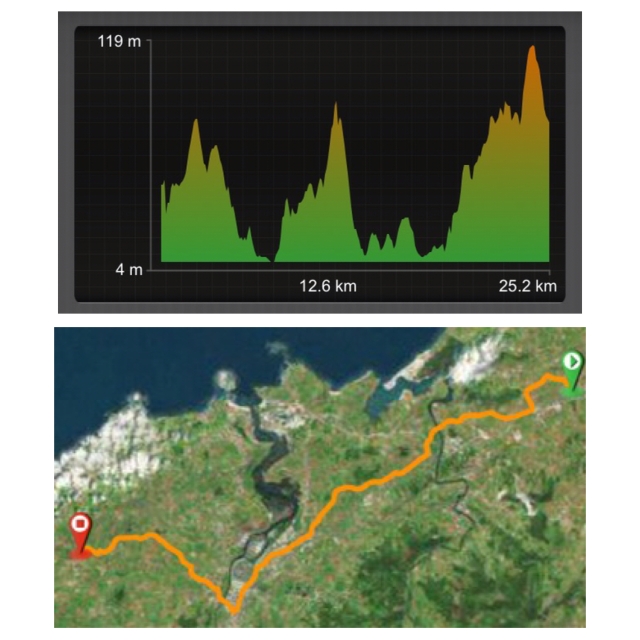 I set off after a good night’s sleep for a day’s walking entirely on road. Most of it was through pleasant countryside and a little through uninteresting towns. Mostly I walked alone, but towards the end of the day I walked with German Gunter.

Gunter stayed in the donativo albergue last night and it sounds as though I should have walked the extra distance and stayed there also. There was a communal meal and wifi and a happy crowd of pilgrims. Whereas I stayed at the private accommodation ‘Nimon’ that calls itself an albergue, but was just an apartment with several rooms available. It was ok and cost 15 euros including breakfast that I didn’t want.

A few km’s into the walk a decision had to be made. The ‘official Camino’ took a long loop around a river at the town of Boo, which added many km’s to the day’s distance. There were two alternatives to this, one legal and one illegal. The legal option involved taking the train one stop over the river via a bridge. And the illegal option was to walk on the rails over the bridge and pray that a train didn’t come during the crossing.

I had decided on the illegal option, but really didn’t want to do it on my own. I am generally a law abiding, risk averse kind of person, but I didn’t want to add unnecessary km’s and I didn’t want to take any form of transport. My good luck held out and just as I approached the point where it was necessary to walk along the tracks, a lovely spanish guy and his dog appeared as if from nowhere. So I had moral support for my illegal and slightly dangerous adventure. It is just under one kilometre that has to be walked along the tracks but only around 100 metres across the bridge. As we approached, a train came hurtling by and almost whipped off my visor with the backdraught. It was close. But I had read that the trains only crossed the bridge every thirty minutes, so we should have plenty time to make it across before the next one. That didn’t stop me walking as fast as I could though. And I was very relieved to reach the other side 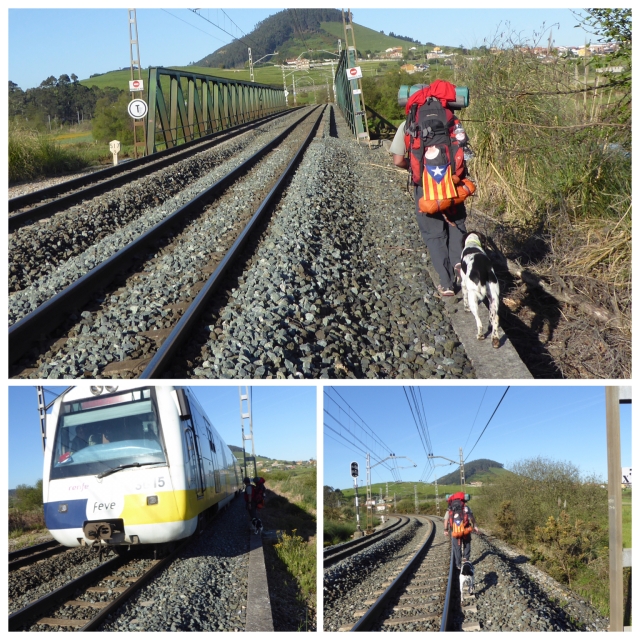 All was well and I enjoyed chatting in a mix of English and Spanish with my new pilgrim friend. His dog, a beautiful spanish pointer is a bit of a wayward spirit. Dashing all over the place, into fields of cows with tiny calves which caused a lot of agitation. Into every garden that we passed which caused pandemonium as every dog in the neighbourhood (and there were several in each property) asserted their ownership rights and barked as loudly and ferociously as they were able. It was a rolling pattern of raucous dog noise over and over again. Not conducive to a peaceful Camino, so I put some distance between us, although the noise bounced back at me until they were a long way ahead. Dog and owner were charming, but completely oblivious of the chaos they were causing to others.

Earlier in the day I found a rare opportunity to take some dew-drop pics and am rather pleased with the results. 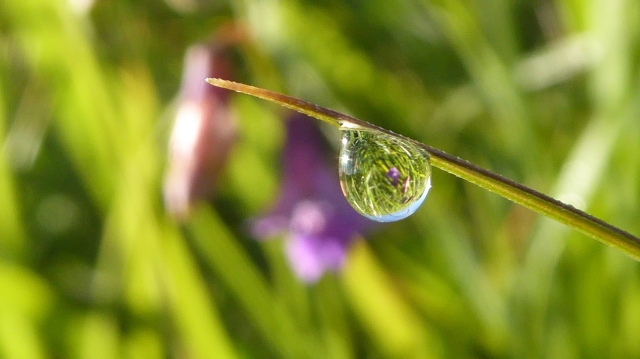 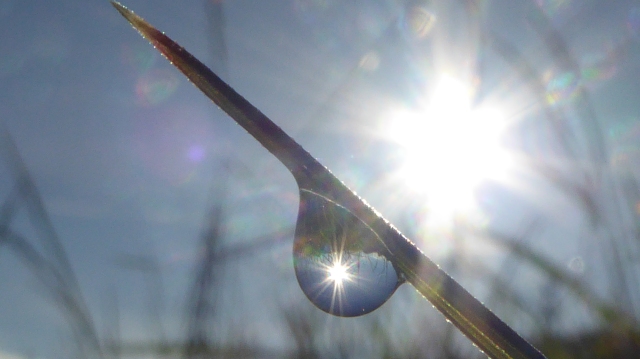 I came across a herd of cows with a couple of tiny calves that were shackled with wooden yokes with chains dragging from them. The only reason I can imagine for this unnecessary treatment was that perhaps they were doomed to be fighting bulls and their necks needed to be strengthened. Any info to the contrary will be happily received. 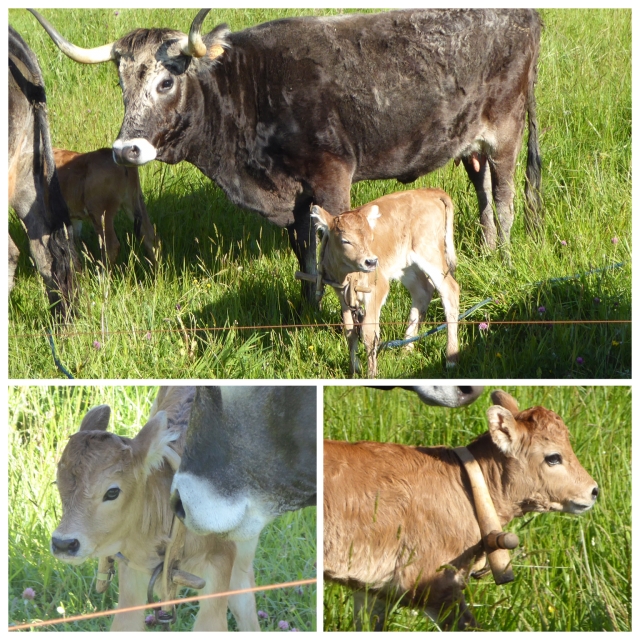 I arrived at my stopping place of Santillana del Mar (although it is not on the coast, it is not far from it) at around 14:00. The albergue does not open until 16:00. We are now a group of twelve pilgrims sitting in the sunshine waiting for the hospitalero to arrive and allocate the beds.
7 French
1 German
1 Italian
1 Colombian
I spanish (with dog)
And me 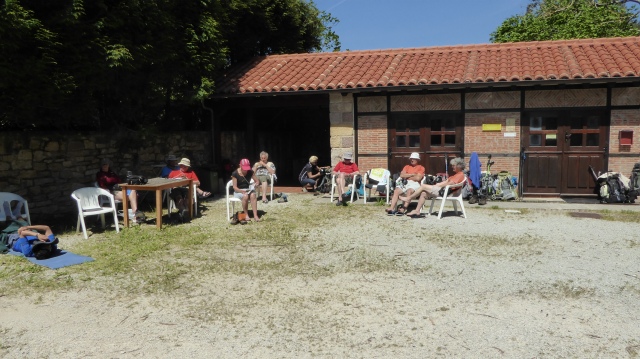 As one of the fist to arrive I was quickly into the shower before a queue formed. The albergue has sixteen beds over two rooms with two showers and two loos. Spanish dog man was allocated a bed in my room which caused alarm bells, as he had told me he is a champion snorer (roncador). But thankfully he said he would sleep outside with his dog. The cost is 6 euros and we were given a nice cotton sheet and pillowcase to put on the rubber covered mattresses and pillows.

Clean and changed, I wandered out into this charming largely renovated medieval village. It really is quite beautiful, but marred by herds of tour groups. There are an abundance of touristy shops, and many restaurants which seem reasonably priced – I might try one later – watch this space! There is even a Parador (but I won’t try that) That was a lie – I am currently in the parador uploading this post. 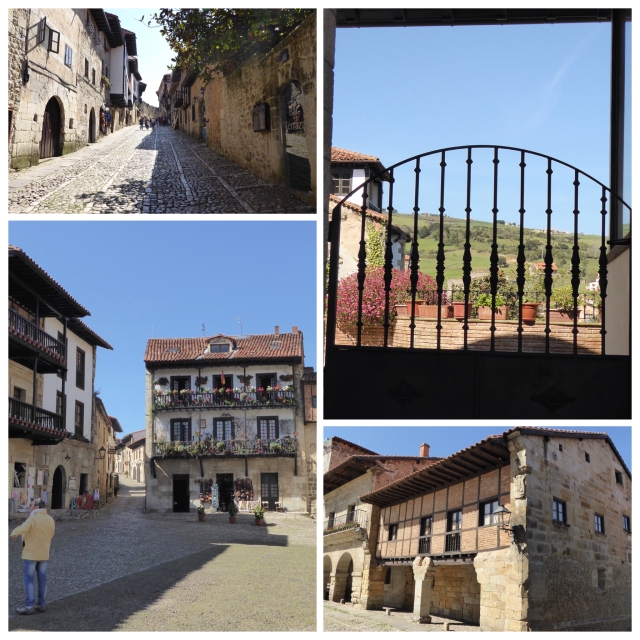 I had read that this Camino entailed a lot of road walking, but slightly dismissed this info as pilgrim whinging. But it seems thus far that for every glorious day of cliff top/ beach walking, one has a price to pay in the form of pavement pounding. But I am only on day 12 of 40, so things may well change – let’s hope that change is for the better!

Oh, and by the way – it occurred to me yesterday as I walked through Santander that it took me three hours to get from the city to Irun on the bus, and ten and a half days to walk back again. But I have seen so much more.