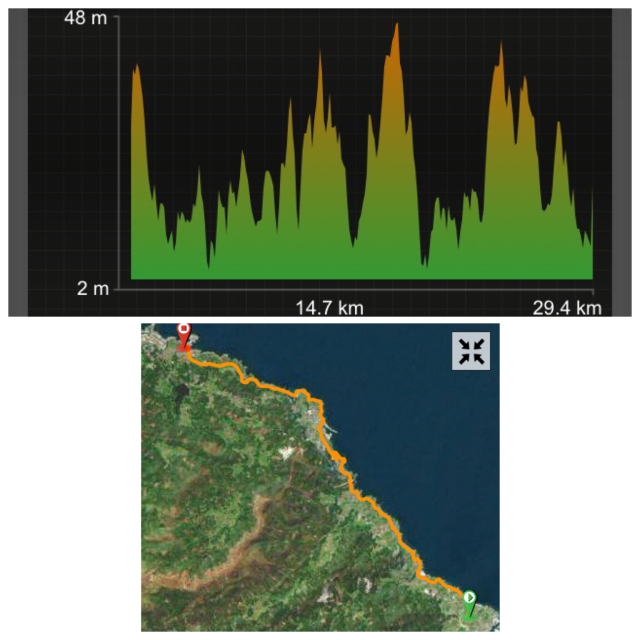 My friends, I have landed in pilgrim heaven, happy indeed – but more of that later.

Today’s accommodation puts the Hotel O Norte to shame. The room would have been OK for 15 or 20 euros, but 48? It was ridiculous. But arriving somewhere late on a Sunday afternoon leaves you open to rip-off. However it didn’t spoil what was a fabulous day. I didn’t actually leave the room, having spent that much on it I needed to get at least something in return. I dined on another serving of stale bread and well travelled cheese, tomatoes and chocolate (the fruit was all devoured at picnic time). I took the opportunity to catch up with blogging and passed through Foz with no real impression of what it has to offer (except overpriced accommodation).

I partook of the breakfast included in the cost of the room and ordered toast and fresh orange juice before making a leisurely start to my day at around 08:15.

I set off with the wikiloc track of the Ruta do Mar posted by Forestman. I have to reiterate how useful it is to have a GPS app to refer to. The Cantabrico signage has been pretty good again today, but there are times when a little additional help is very useful. Yesterday I completed the Cantabrico etapas 1 & 2, and today etapa 3 was to Burela and 4 to San Cibrao. I saw no camino signs today. 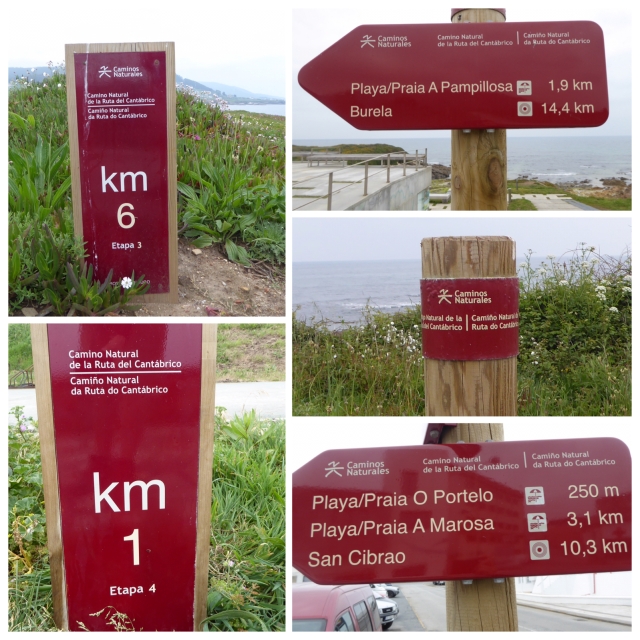 The walking has been mostly on various paved surfaces today, again well served with rest areas and picnic facilities. The cliffs hereabouts are smothered in Carpobrotus rossii (I had to look it up, I have some in my garden but didn’t know the Latin name, or even the common name come to that). Without the sun, the flowers are not showing at their spectacular best, but I am hoping that when I do have some sun, they will still be in abundance and I can blind you with their magnificence. 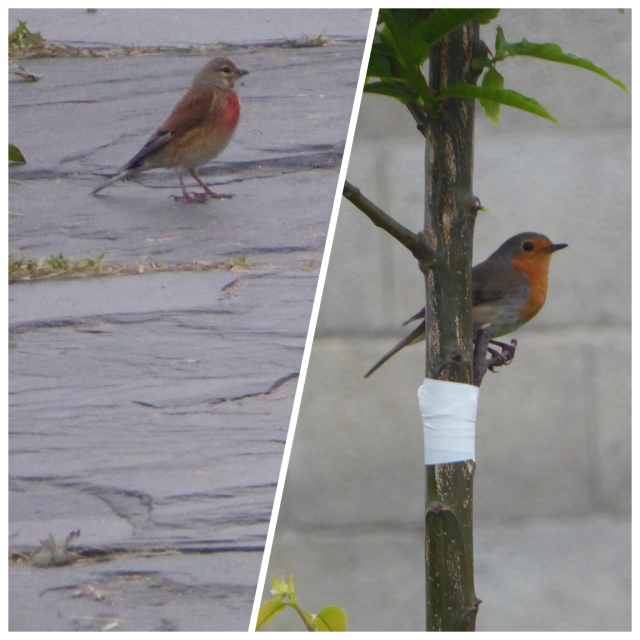 Even I know a robin when I see one, but what is the bird on the left?

I passed many rocky coves, with fewer sandy beaches today, but still sufficient sand to keep an army of children happy. There were a few short soft surface tracks, but mainly paved walkways. There were also tiny paths that seemed to lead through gardens and despite following the Cantabrico signs and using the wikiloc app I do feel a bit like Dora the Explorer treading unchartered territory.

At one point I followed arrows to walk off road through soft woodland leaf-mould, alongside the train line. But the track came to an abrupt halt and my options were to retrace my steps for around 500 metres or walk alongside the rails for a couple of hundred metres. I walked on as fast as the stony ground would allow, but had to cross the tracks to reach the road above. Whilst crossing I tripped slightly, and just as the thought passed through my head of a leg-break mid crossing and a Chaplin-esque scene of an approaching train, at that very moment I felt the rails vibrate, although I heard no sound for a second or two, and before I knew it a train hurtled past blowing its horn at full volume. Could have been a close shave – luck of Maggie holds out! 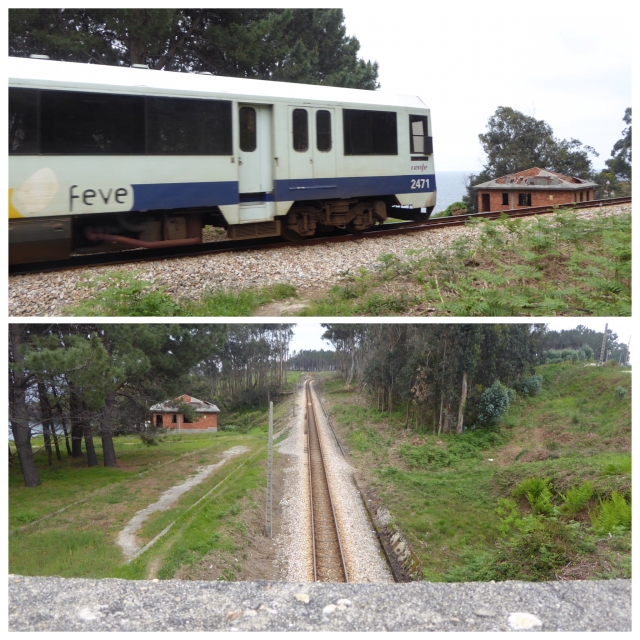 Later, as I approached Burela and was enjoying a walk around the headland, the trail suddenly came to a barrier and was completely fenced off, due to road construction works. There was no indication of how to circumnavigate the works. But once again I could take a close look at the GPS to work out where I needed to go. It took one full kilometre to backtrack, cross the railroad, walk along the busy N634 through the middle of the town and get level with the point at which I had been interrupted, but then I had to navigate my way back across the rails to rejoin the path, which took another kilometre. The part of Burela that I saw was not attractive and I was very pleased to leave it behind and rejoin the coastal path, now along sweeping sections alongside a quiet road. There were a few kms towards the end of today’s stage that were entirely uninspiring, along a fast moving road in an industrial area, but the last kilometre or so was through pretty countryside that deposited me right into the town.

I felt a little fatigued today after my great effort yesterday, but made pretty good time to arrive in San Cibrao (also known as San Ciprio) at around 15:00. I found the accommodation I had booked this morning, but had to call the owner when I arrived. So I visited the bar next door and ordered an ice cold glass of white wine while I waited. Meanwhile the barman bought me two plates full of tapas and invited me to help myself – I didn’t need telling twice! The landlady turned up and gave me the choice of two rooms. I took the twin with tiny bathroom and magnificent view of the beach only a few metres away. The Hostal Buenavista is all that I could have wanted. Clean, tastefully decorated, and inexpensive – 20 euros. And the landlady is the most helpful woman. I can thoroughly recommend the place – telephone 982 594 086.

I have taken a lovely stroll along the beach and around the town and am feeling very relaxed. The feet are behaving well, no issues except understandable tiredness towards the end of the day. I have had a bit of backache the last few days, but nothing at all major. All in all, feeling good and strong.