I am writing this in the absolute lap of luxury. But more of that later.

The albergue last night had extremely comfortable beds and our companions, the two spanish guys, were silent sleepers…no snoring – so unusual when sharing accommodation with men of a certain age. My notes told me it would cost 7 euros, but when I offered that to the hospitalero he declined and pointed to a ‘donativo’ box. So I put the 7 euros there instead. Thank you to Alatoz for providing such a comfortable place for us to stay.

We left before 07:00 in the knowledge that we could get some breakfast in the bar on the way out of town. By the time we left the bar the sun was about to rise and we were very soon walking along gravel track through olive and almond groves. There are many, many almonds growing in this area.

The sun rises spectacularly quickly to our right. Nina has walked ahead whilst I stop to take photos. And then a rock rises up from the track and trips me – leaving me sprawling like a starfish on the beach (but it was a bit harder than sand!). Not much harm done, just a grazed knee. I remove my pack whilst I regain my feet, brush myself down and start all over again!

There is not a breath of wind, glorious sunshine and no clouds. The countryside is beautiful, undulating fields of green crops and orchards.

I’ve noticed before when I am between the rising sun and a green field my shadow has an aura about it. A brightness around my shadow’s head that moves with me. It makes me feel quite saintly. Although I discover this phenomenon is not peculiar to me, as Nina later mentioned that she noticed the same thing. Perhaps we are both special!

For some reason my Wikiloc tracking app stopped working as we left the village and I didn’t notice until I reached a road some time later. When restarted, it just drew a straight line and told me I had walked 5 km. A short while later we were on an enchanting track through a pine wood on a carpet of needles. The path is really narrow, barely discernible, weaving through the trees, but there are lots of arrows and dots to show us the way. 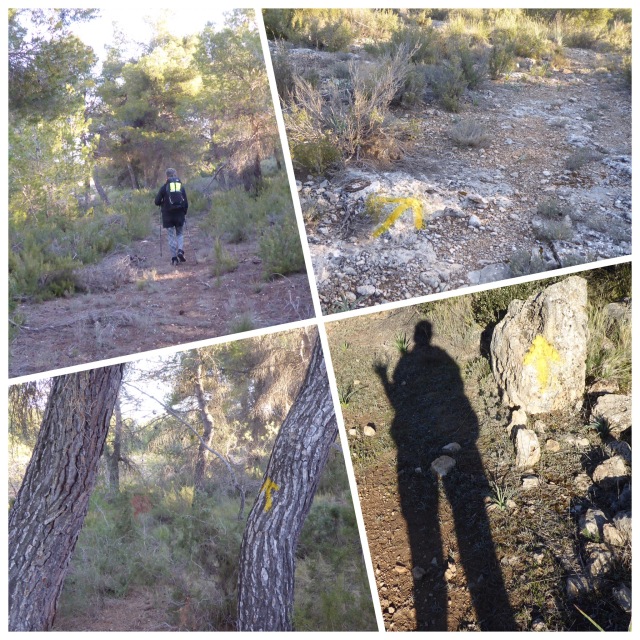 Soon enough we were back on a wide gravel track, passing by a haystack bigger even that the one we all know from the Camino Frances, an absolute hay high-rise. 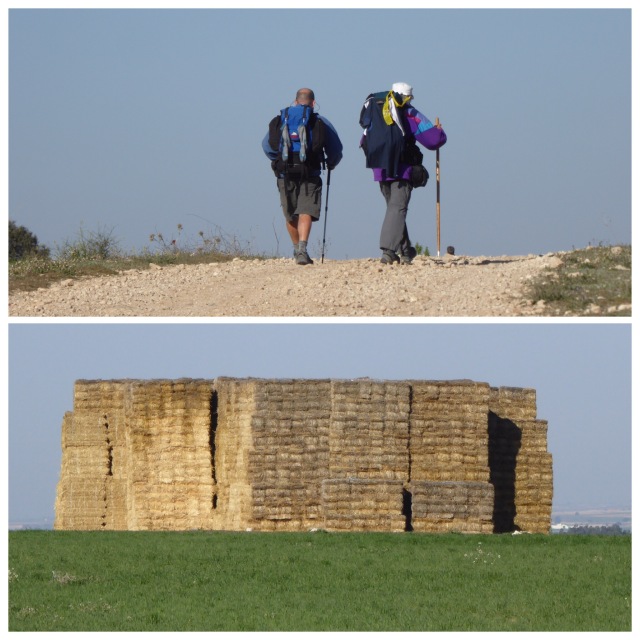 We reach the village of Casas del Cerro (at around 16.5 km) and are astounded to see the huge canyon where the town of Alcala del Jucar is cradled. I knew it was coming but nevertheless it was a surprise when all we have seen for days are km upon km of flatlands. The view is so dramatic with the river running way down at the base, and the castle high upon the hill. We drop 150 m into the basin and immediately climb almost the same height up to the castle, where we pop into the shop, buy a couple of cans of beer, sit on a bench and eat red pepper and hummus, whilst feeling all is well with our camino world. 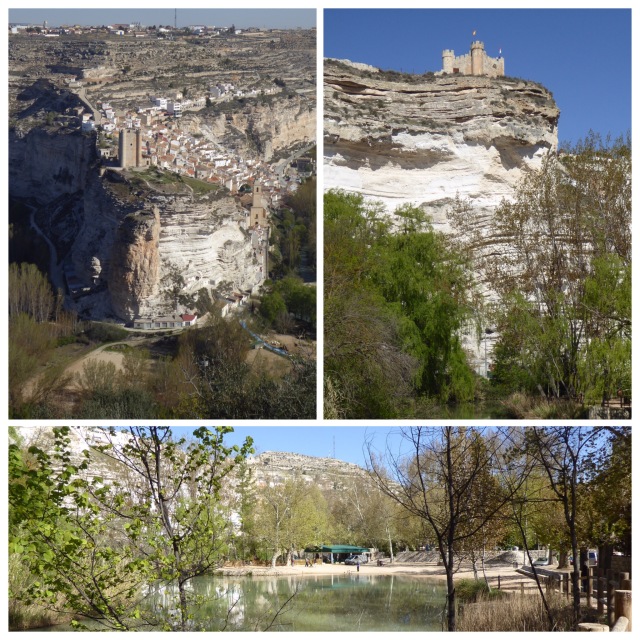 We exit the canyon on a narrow ledge around the rim of this extraordinary basin and soon find ourselves in the village of Las Eras, and then back onto the monotonous wide, straight gravel tracks running between fields of cereals and vines. So many vines! Ancient knarled vines , newly planted vines, and everything in between. So it shouldn’t have surprised us when we see, in the middle of nowhere, a huge building with massive vats alongside and discover that it is a wine cooperative. But what did surprise us was that alongside was a go kart track and assault course and a gaggle of guys obviously out on a stag weekend acting in a very bloke-ish manner.

As we are walking the wind picks up, but not the bitter wind of days past, this is quite welcome in the heat of the afternoon. At one point we see a whirlwind of dust taking off and heading towards us. We turn our backs and can feel the grit being hurled against the backs of our legs. Shortly afterwards we discover we have taken a wrong turn and have to consult my track on ‘maps.me’ to see how to make amends. We have probably added a couple of kms to this already long stage. But we both feel surprisingly strong today and stride on to our destination.

It occurs to me that this whirlwind might have been a ‘sign’, making us turn in our tracks and perhaps encouraging us to regain the correct path. Maybe something to do with our saintly aura earlier in the day? Whatever the intention, we kept walking in the wrong direction. We shall have to be more aware of possible heavenly interventions in future!!

We arrive at our destination Casa Ibáñez and decide that the ayuntamiento albergue would most likely not be available on a Saturday afternoon and opt instead to stay at Hotel Aro’s, and there we return to the luxury mentioned at the beginning of this post. A (double) room each for 25 euros with endless hot water in a powerful shower. Oh what bliss. And as an added extra, a balcony in the sun to dry all my washing.

We visited the church to see if we could obtain a sello for our credenciales. It was approaching time for mass and quite a crowd had assembled. We found a very helpful man (a curate?) who happily stamped our passports and gave us interesting information about the church, including pointing out the huge chandelier/disco ball that was hanging from the vault above the alter, telling us it was a Christmas decoration made of coffee machine capsules. How clever, apparently made by one man from thousands of those pesky pods. 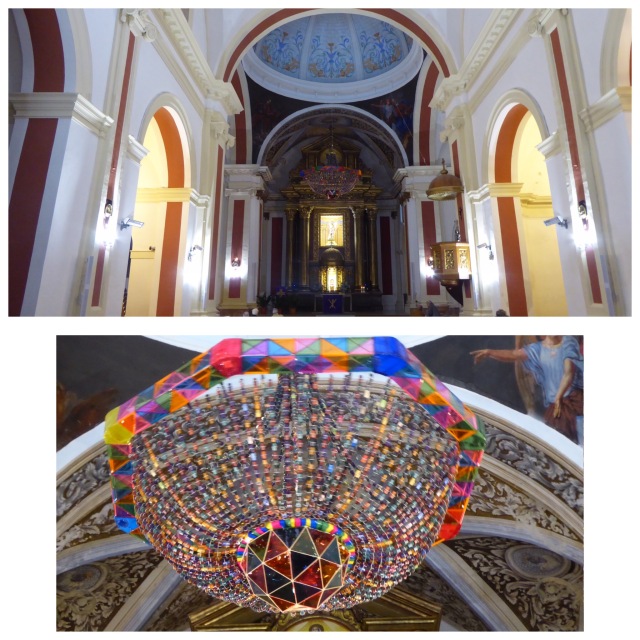 A truly lovely day on the camino.

If you want to stay in the albergue in Casas Ibáñez, it is situated in the bullring, Calle la Tercia, phone ayuntamiento in advance on 967 460 003.