I was late setting off this morning and then stopped for a hot drink – Paul’s laid-back influence. The journey out of the city was not as bad as the approach, but we were on the road for around 15 km. There are a series of bridges crossing the wide Rio Miño and our path took us over an ancient bridge, which I couldn’t photograph because of the poor angle I could see it from, but I took a lovely photo of the modern bridge a few hundred metres away.

At around 7 km I found myself climbing the most ridiculously steep hill – 19% for two km’s! It was a real killer – but there was nothing to do but keep putting one foot in front of the other, again and again and again. Eventually it evened out and soon after we came upon a resting place for pilgrims in the form of an old house, hosted by a charming and very talkative man who offered sustenance. I was served a delicious slice of sugary ‘eggy bread’ and a glass of his home made ecological wine, which was very good. A couple of villagers came and joined in the conversation for a while and it was all very pleasant. 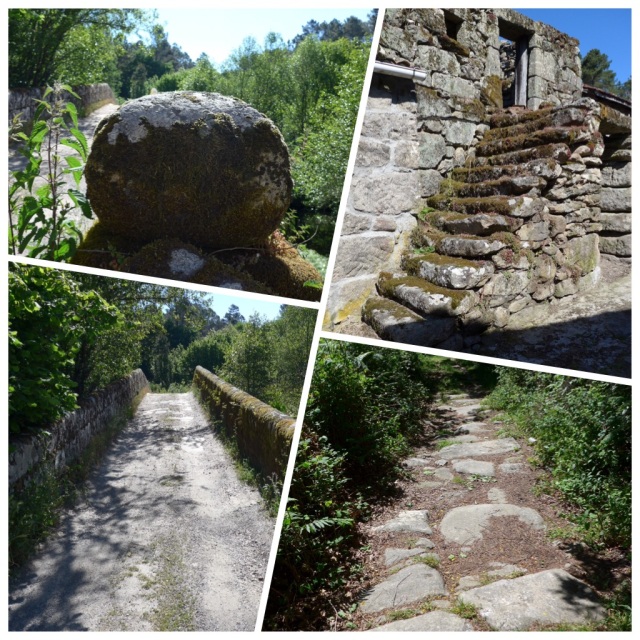 Soon after we started to walk on tracks, some of which were the remains of Roman roads (always hard on the feet) and we were led across a medieval bridge. Again, it was a short day that seemed quite long. Maybe I am getting to the end of my endurance. I certainly didn’t feel particularly refreshed from my relaxing thermal dip yesterday. But I saw a road sign today stating that Santiago is 79 km’s away. 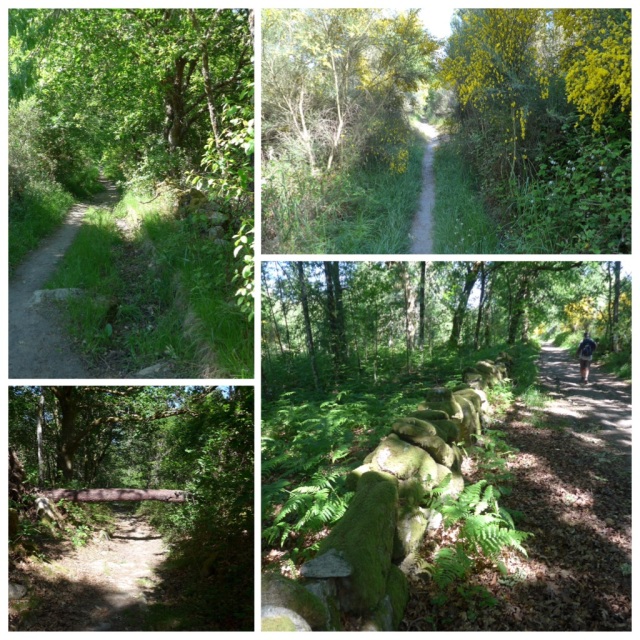 Here in the small town of Cea, the houses are in better repair than most small towns and villages and it is mostly very attractive. I felt it my duty to try a small portion of pulpo which was very nice. And I found a bar to send off yesterday’s post. I realise I omitted a photo of our previous night’s dinner, which I will include when I next get a chance (now done).

My guide says the Xunta albergue has been reported to be a bit dirty in the last year or so, and I can’t say that it was wrong. The accommodation is good, as in all Xunta albergues, but it is in need of a jolly good spring clean. The hospitalero reminds me of a dodgy character from an episode of ‘Only Fools and Horses’.

There seems to be a large influx of new faces the last couple of days and I have put this down to the fact that Ourense is the starting point for pilgrims who want to walk the minimum distance (100+ km’s) to receive a compostela (certificate) – the equivalent of Sarria on the Camino Frances and Valença/Tui on the Camino Portuguese. The forty places in the albergues last night and today have been full. I have to say that I don’t like such crowds, although once walking, people spread out well enough and I don’t necessarily see anyone during the day.

I am undecided as to whether I shall reach Santiago in three or four more days. If four, then I will need to take a very short stage tomorrow. Let’s just wait and see what pans out. The end is definitely in sight and I shall be really glad to get back to some home comforts and familiar surroundings. 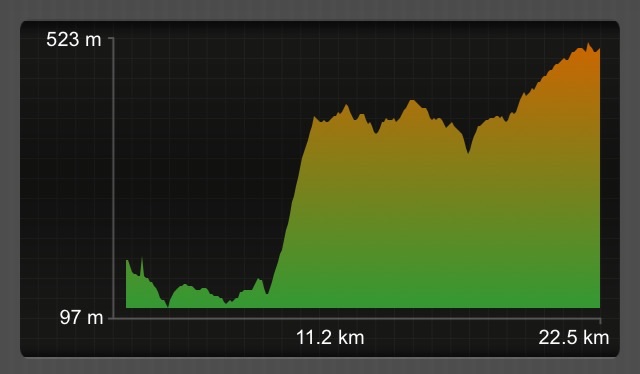