Guadix is a beautiful city with stunning period property, which was enhanced by the early morning sun as we left for today’s stage.

It was a very pleasant walk out of the city, and after meandering through the streets for 2.5 km, just as the edge of the city turns into countryside, we saw a sign off to the left for a Cafeteria. The tables were set with glasses and water jugs, the tostada con tomate came with the tomato in a tiny mason jar and we were each given a fruit salad tapa. Best camino cafe ever.

After our coffee stop we were immediately directed onto dirt track and were soon walking through woodland and past disused cave houses. It was fabulous, fabulous walking with the sunlight shafting through the pine trees, bird song, wildflowers, blue sky and a fresh breeze to complete the perfection. It doesn’t get much better. We explored a long deserted cave, but decided it must have been excavated for people who were extremely vertically challenged. 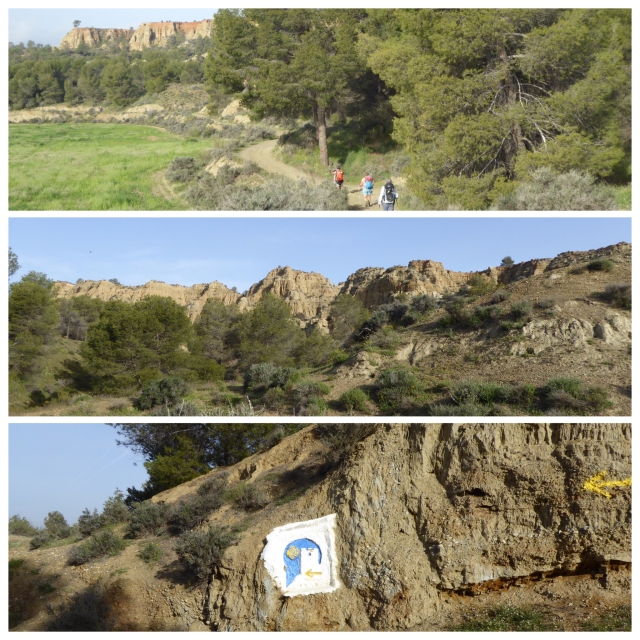 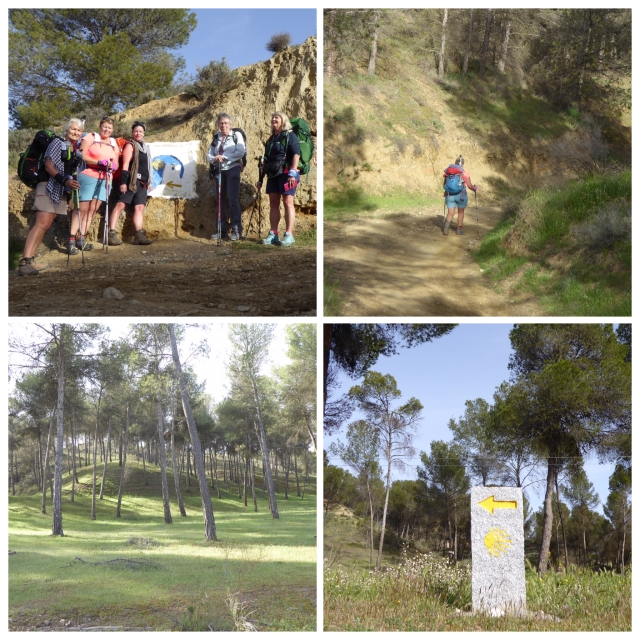 Our first stop was at Purullena at 9.5 km – a large and unattractive town that was holding its weekly street market as we walked through. Marilyn considered a purchase, but on balance decided the weight might be prohibitive.

From Purullena we walked a very pleasant concrete track winding between olive and almond groves to the next village of Marchal, 12.5 km, a community bursting with cave houses and spectacular views over the gorge. And then onto another road passing between incredible rock formations to the very pretty village of Los Baños at 15 km. Even this band of very laid-back peregrinas didn’t need to stop for refreshment at every opportunity, and we saved our last break for the next village, Graena at just short of 16 km where we had drinks and tapas.

I am curious about the cave houses. They are still being built. We have seen workmen building entrances to many sub-terranian dwellings. Can one just decide a certain hill looks inviting and start digging? Or is permission required, and if so from whom? And presumably some payment for the underground footprint is required? Intriguing. Answers on a postcard to….

Some time after leaving Graena we finally return to track after some 6+ km on hard surface and I really appreciate the soft ground, but then it gets a bit too soft and is back to beach walking, and then it becomes rough again and I realise we are back on the dreaded river bed.

I decide to plug in to my camino playlist and zoom ahead. The track becomes rougher and more difficult, to the extent that I climb the bank into a field of young pea plants and when I come to a fence at the end of the field, cross over to the other bank until I can see that the river bed has become easier to walk. Suddenly I arrive at a point which is a sort of T-junction and there is no indication which direction I should take. I consult the app on my phone – maps.me and am slightly alarmed to discover that I am a considerable way off track by at least 500 m. I could have backtracked, but I had no idea how far back I would need to go and anyhow backtracking is for wimps. So I called upon maps.me to find me a route to my destination. It obliged, but failed to take into account that I was on the wrong side of a humongous ridge. After climbing steadily and still not getting where I needed to be, I decided I just needed to go ‘up and over’ said ridge and find my way via scrubland and eventually a track, to the road where I should have been. I added about 3 very challenging km to the walk, but what an adventure it was – and I did it! All with the help of my technology. Maps.me and my power bank to charge up my flagging phone got me where I needed to be. Girl-power and electronics saved the day!

Of course my camigas realised something was amiss when they reached the switch back road and could see no sign of me ahead but we were able to communicate via whatsapp to assure them that I was not at all lost, just exploring the countryside! They waited for me at the entrance to La Peza and cheered me on as I came into sight.

There was no room at the inn when we arrived at the albergue. The charming hospitalero of the donativo accommodation checked the various rooms and found one bed available for four of us (two had decided to stay at a casa rural). But there was a empty room with two inflatable mattresses and the mattress from the spare bed was added to the end room, which left one peregrina homeless for the night. Hospitalero Luis then decided we could use his room because he didn’t need it, and my wonderful camigos decided that I should have the proper single bed in its own room all to myself because I had walked those extra three kilometres. So here I am, writing my blog late into the night without disturbing anyone.

Tomorrow we have a long stage of 30 km with no opportunities to stop for refreshment, so we must take supplies with us for the long day. I have been to the shop and purchased rolls, salad and fruit. I already have a small supply of walnuts and sultanas, and Oreos, so I shall picnic well along the way.

We visited Bar Oscar for supper. I quietly asked señora behind the bar if she could make anything for a starving vegan pilgrim. She thought for a moment and offered me a plate of vegetables. Marilyn, who is vegetarian and I happily accepted the offer and were rewarded with freshly cooked carrots, peas, artichokes, mushrooms and asparagus. Very tasty and exceptionally kind. The others had huge home made pizzas and roscas which were way too big for even a hard-walking pilgrim to manage, and tin foil was provided for take-away picnic food.

Today, we have been walking for a week. We are in a bubble of I think thirteen pilgrims. Unexpectedly large numbers for this camino. Accommodation for tomorrow’s end stage is also limited and I quickly checked out booking.com and found a townhouse to rent for the night that could take us all. The following night we have also booked hostel accommodation in Granada.